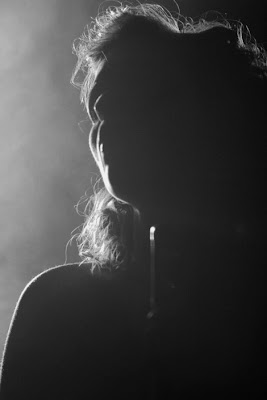 Instead of writing duplicate movie reviews, I decided to put together a list of my favorite, BEWARE OF THESE WOMEN! for Monty's FESTIVAL, for the month of April. We all know her the woman we love to hate, but secretly admire for her lack of tact, compassion, or both. For the month of April, ALL GOOD THINGS, NOIR and CHICK FLICKS, AND THEN THEY START TO SPARKLE, will share their classic favorite "bad girls" with you.

Please click here to view "And Then They Start Sparkling" blog page. 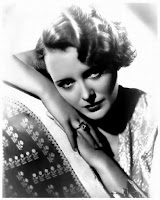 Some of my favorite Femme Fatales include: Mary Astor, in The Maltese Falcon, who does her best to do in, Humprhey Bogart. A private detective who takes on a case that involves him with three harden criminals and their search for a priceless statue. 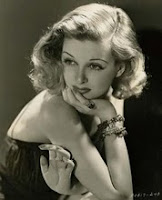 Joan Bennett, Woman in the Window (1944). Directed by Fritz Lang that tells the story of psychology professor Richard Wanley, who meets and falls in love with a young femme fatale. Wanley, kills Alice's lover in self-defense. Alice is then blackmailed by Heidt, a crooked ex-cop who was the dead man's bodyguard. The story has a wonderful surprise ending.

Please click here to view "Woman in the Window" review.
The term "film noir" began as a genre description, because of this movie. The term first was used to describe American films in French film magazines in 1946, the year when The Maltese Falcon (1941), Double Indemnity (1944), Laura (1944), Murder, My Sweet (1944) and The Woman in the Window were released in France. 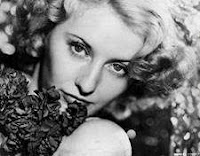 Barbara Stanwyck, who lures Fred MacMurray into her murderous plot in, Double Indemnity (1944). Directed by Billy Wilder. The film stars Fred MacMurray as an insurance salesman, Barbara Stanwyck as a housewife who wants her husband dead and Edward G. Robinson as a claims adjuster whose job is to find phony claims.

Both these actresses revised these early roles in later films: Joan Bennett in Scarlet Street ( 1945) and Barbara Stanwyck in, The Strange Love of Martha Ivers (1946). 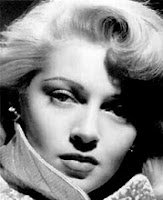 Another, favorite Femm Fatale, was Lana Turner, in the film, The Postman Always Rings Twice (1946). A story about a married woman and a drifter who fall in love, then plot to murder her husband... but, will they be able to live with what they have done?

Another well known femme fatale is, Rita Hayworth in the film, Gilda (1946), Rita Hayworth, is wonderful as Gilda in this noir classic. From her hair-tossing scene to her song "Put the Blame on Mame,". Hayworth is very convincing in the romantic triangle.

She also gives another wonderful performance in the film, The Lady from Shanghai (1948). The story is about a man by the name of, Michael O'Hara, who hires a crew member from Arthur Bannister's yacht, sailing to San Francisco. They pick up Bannister's law partner, on the way. Bannister has a wife, Rosalie, who seems to have taken a liking to Michael. After they reach Sausalito, Michael goes along with Grisby's to fake his murder so he can disappear with out a trace. But Grisby is actually murdered and Michael gets blamed for it. Will he ever know who set him up? 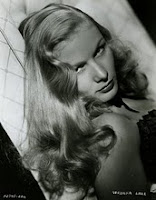 Veronica Lake in, This Gun for Hire (1942), The story is about a hit man Philip Raven, who kills a blackmailer and is paid off by Willard Gates, with "hot" money. Meanwhile, Ellen Graham, girlfriend of police Lieut. Crane is asked to help investigate Gates. Raven, seeking Gates for revenge, meets Ellen on the train their relationship becomes an unlikely team. 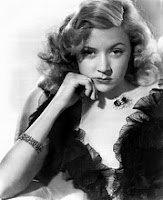 Gloria Grahame in, The Big Heat (1953). The story begins when Cop Dave Bannion, is investigating a gang who he things holds power over the police force. Bannion is tipped off after a colleague's suicide and his fellow officers' silence lead him to believe that they are in with the gangsters. When a bomb meant for him kills his wife instead, Bannion with vengeance in his heart, aided by the gangster's spurned girlfriend Debbie, together they use any means necessary to learn the truth. 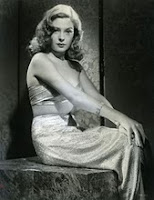 Jane Greer in the film, Out of the Past (1947). The story begins when Jeff Bailey, has his dark past catch up with him, when he's ordered to meet with gambler Whit Sterling. He decides to tell his girlfriend his story. Once, Jeff was a private eye hired by Sterling to find his mistress Kathie who shot him and took of with a large amount of money. He catches up with her in, Acapulco... where Femme Fatales Kathie makes Jeff forget all about Sterling... Will Whit's new job for Jeff turn out to be a trap?

Please click here to view "Out of the Past" movie review. 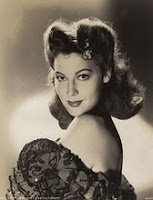 Ava Gardner in, The Killers (1946). The story begins when two professional killers kill a gas station attendant, "the Swede," who's expecting them. Insurance investigator Reardon investigates the case against the orders of his boss. Reardon uncovers a crime, all linked with the mysterious, Kitty Collins.

Ann Savage in, Detour (1945). The story begins in a flashback: New York nightclub pianist Al Roberts, hitchhikes to Hollywood to join his girlfriend. On a rainy night, the gambler he's riding with dies, afraid of the police, Roberts takes the man's identity. But thanks to a blackmailing dame, Roberts' every move puts him deeper into trouble...

Last but not least, my favorite Femme Fatale.. Gene Tierney in the film noir, Leave her To Heaven(1945). 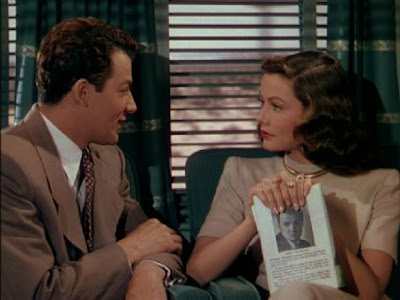 A color film noir. Cast: Gene Tierney, Cornel Wilde, Jeanne Crain, with Vincent Price, Darryl Hickman, and Chill Wills. The story was adapted for the screen by Jo Swerling, having been based on the best selling novel of the same name authored by Ben Ames Williams. The film was directed by John M. Stahl. Tierney received an Oscar nomination as Best Actress in a Leading Role for this film. This one of my favorite "bad girl" movies. Gene Tierney plays a woman consumed in jealousy and vengeance. You will shocked by her murderous acts. This maybe one of those classic film noirs that you will want to watch over and over again.

The story begins when, Richard Harland is released from prison after serving a two-year sentence, he goes to Deer Lake, Maine and is met by his attorney, Glen Robie. Glen has a canoe waiting for Richard to take him to his lodge, "Back of the Moon," then tells his story to his friend:

A few years earlier, Richard accepts an invitation from Glen to vacation at his ranch in beautiful Jacinto, New Mexico. During the train ride, Richard meets a beautiful woman who says that he reminds her of her late father.

Richard is met at the station by Glen, who tells him that, Ellen Berent and her family, are also staying at the ranch. 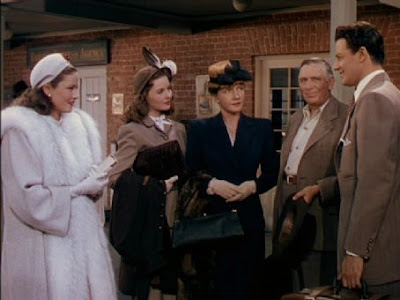 During dinner, Ellen tells Richard that they have come to scatter her father's ashes at his favorite spot in the mountains. The next morning, Richard follows and watches while the Berents scatter the ashes.

The next day, Richard admits to Ellen that he asked Glen about her fiance, attorney Russell Quinton, she then tells him that she has taken off her engagement ring. The next night, Russell comes storming into the ranch, after receiving a telegram from Ellen breaking off their engagement and everyone is shocked when Ellen, announces that she is going to marry Richard. Soon after, the couple are married and after a brief honeymoon, the newlyweds travel to Warm Springs, Georgia, to visit Richard's younger brother Danny, who is recovering from polio.

Ellen helps Danny, to walk with crutches and soon they are all headed to Back of the Moon. At the lodge, Ellen soon resents Danny and Leicke Thorne, an old family friend and the time that Richard spends writing his book. The trouble does not end there.. Ellen, becomes angry when Margaret and Ruth show up at the lodge and Richard is embarrassed by his wife's behavior. Margaret and Ruth leave soon after.

One sunny afternoon, Ellen and Danny decide to go out on the lake in a canoe. Ellen follows Danny close behind and Danny and urges him on, but when a cramp takes over Danny, he cries for help and Ellen sits and watches him drown. 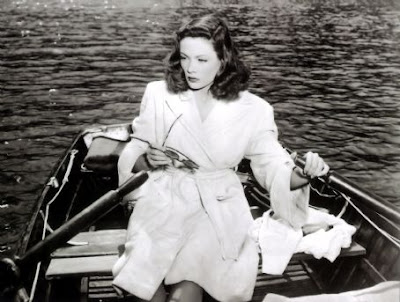 Richard believes that Danny's death was an accident, but as time passes, he goes into a deep depression. Hoping to make Richard's happy, Ellen becomes pregnant and Richard begins to look forward to being a father..

The couple have now moved to the Berent home in Bar Harbor and now Ellen, is not happy about the baby and believes that it will come between her and Richard. Ellen decides to throw herself down a flight of stairs and causes the death of her unborn baby. 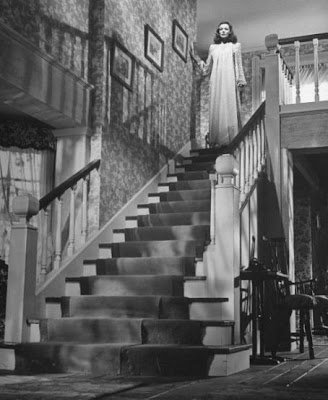 Ruth, needing a change of scenery makes plans to visit Mexico, which is the setting of Richard's new novel. Ellen, become jealous when she reads that the book is dedicated to Ruth and not to her. Ellen then confesses to Richard, that she murdered Danny and their baby. When Richard leaves her, Ellen comes up with a plan to frame Ruth for her murder. Will Ruth be able to prove her innocence? 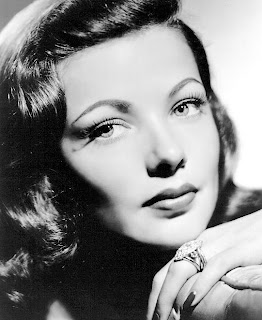 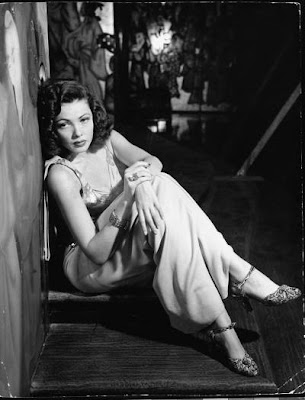 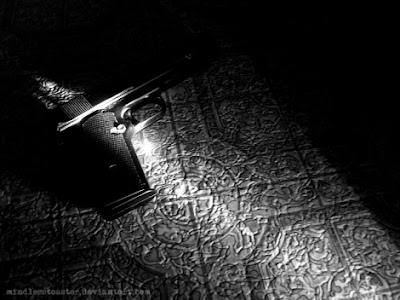 Email ThisBlogThis!Share to TwitterShare to FacebookShare to Pinterest
Labels: beware of these woman