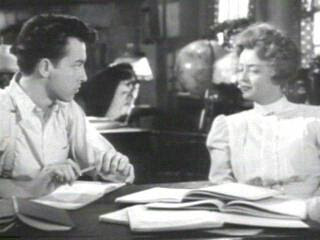 The Corn Is Green (1945). Drama. Cast: Bette Davis. It was adapted from the play of the same name by Emlyn Williams. John Dall and Joan Lorring were nominated for the Academy Award for Best Supporting Actor and Best Supporting Actress.

The people who live in a small countryside village, are surprised to learn that L. C. Moffat, their new school teacher, is a forty-year-old English woman named Lily Cristobel and not a man . Moffat begins making plans, to build a school for the children, who work in the coal mines and asks Miss Ronberry and the minister Mr. Jones, to help her. At first she has problems with the mine owners, who refuse to give the boys time the off from work in the mines and then from the owner of the barn she wanted to use for a schoolhouse.

Although she has many students, Moffat focuses her efforts on Morgan. She believes that Morgan is smart enough to attend Oxford, after she reads a line from his poem ... "and when I walk in the dark I can touch with my hands where the corn is green. "

She asks the Squire, to help Morgan, to apply for a scholarship to the university. Making Morgan feel bad, his friends tease him about his education.. Morgan , now feeling he no longer belongs, gets drunk and tells Moffat, that he wants to go back to working in the mines. She tells him that the decision is his to make. Morgan, leaves and runs into Bessie, who is against Moffat's school.

Morgan goes back to the mines, but is not happy and decides to go ahead with his plans to apply for the scholarship to the university. Moffat, helps him prepare for the examination, but on the morning of the test, Bessie, tells Moffat that she is pregnant with Morgan's child. Moffat decides that it is best to keep this news a secret from Morgan, for now. After the examination, Morgan tells Moffat how much he wants to attend the university.

Soon, the Squire, Miss Ronberry, Mr. Jones and Mrs. Watty, Bessie all arrive at the house. Bessie then tells everyone about her pregnancy and Mr. Jones offers to marry her, but she says she already has a man who will marry her, if the child does not come with her. Mrs. Watty comes up with the idea for Moffat to adopt the child. When Morgan learns that he is the father, he thinks it is best to marry Bessie, even though Moffat's does not agree..

Morgan, receives word that he has won the scholarship, will he decide to go on with his plan to attend the university?

A wonderful little film, There isn't a lot of action, but there are a few good dramatic moments that you will find yourself caring what happens to the characters. 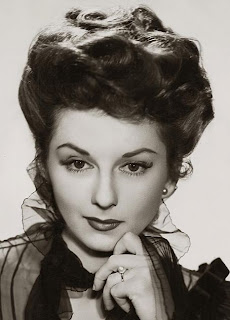 Joan Lorring (April 17, 1926), first film role was in Song of Russia (1944). She made The Bridge of San Luis Rey in the same year, and, in 1945, performed with Bette Davis in The Corn Is Green as Bessie Watty. She was nominated for the Academy Award for Best Supporting Actress for the role. 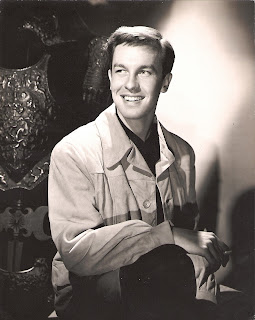 John Dall (May 26, 1918 – January 15, 1971) Was primarily a stage actor, he is best remembered today for two film roles; the cool-minded intellectual killer in Alfred Hitchcock's film , Rope and the trigger-happy lead in the film noir, Gun Crazy(1950).

He became famous co starring with Bette Davis in the film, The Corn Is Green, for which he was nominated for the Academy Award for Best Supporting Actor.
Posted by Dawn at 3:16 AM