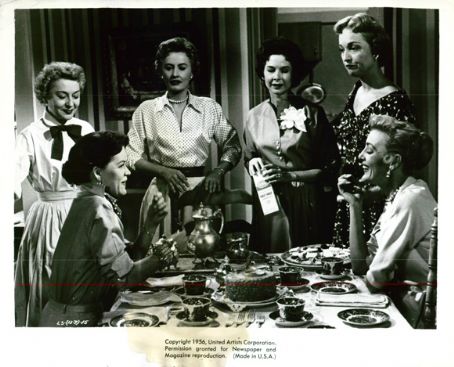 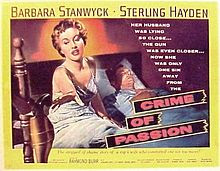 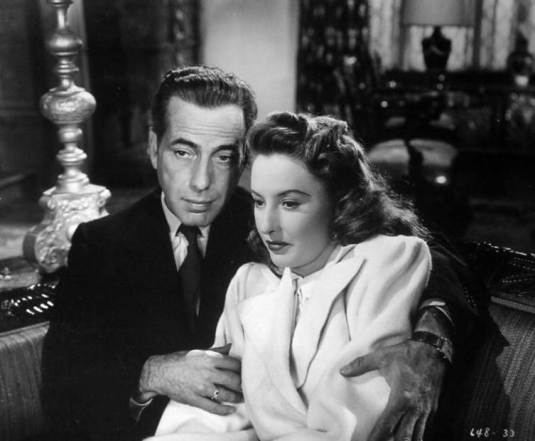 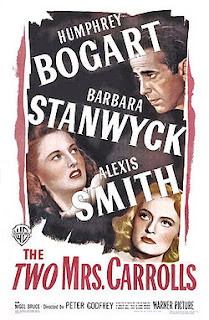 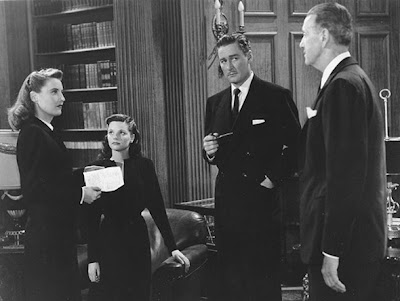 Cry Wolf (1947). Mystery. Cast: Errol Flynn and Barbara Stanwyck, based on the novel of the same name by Marjorie Carleton.

The story is about.. A woman, who shows up to claim the inheritance of her late husband and receives a cold reception. 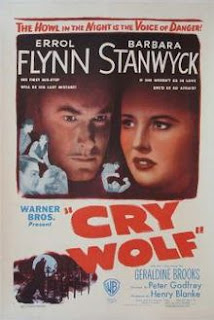 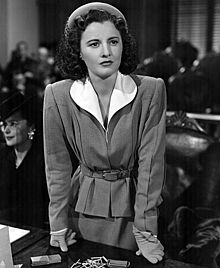 After Fiona, Evelyn and Susanna's mother dies on the sunken RMS Lusitania and their army officer father, Penn Gaylord, is killed in France, they find themselves running their Fifth Avenue mansion alone. They do not know anything about their half billion dollar inheritance.

Fiona, is the oldest of the three girls and is now "the head of the household". Fiona, tells the servants that she will now be called... "Miss Gaylord".

Fiona marries Charles Barclay, so she can finalize the probate of Penn's will, which had been tied up in court for 25 years. Barclay, has done everything he could to keep the will from being settled, so he could force the sisters to sell him their mansion so he could develop the land. Barclay, says his reason for tying up the will of 10% of the estate was to give the money to a orphanage.

Fiona, has no objection to the orphanage, but she is opposed to the real estate development. She makes this known at a court proceeding before she and her sisters walk out. 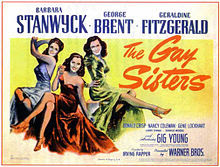 Ladies They Talk About (1933). Pre-Code prison film about a woman, who is sent to San Quentin. Based on the play Women in Prison by Dorothy Mackaye and Carlton Miles. Cast: Barbara Stanwyck, Preston Foster and Lillian Roth.

Nan Taylor, is accused of robbing a bank. David Slade, who in love with her, but when she confesses to the crime, he has her imprisoned. Inside, she meets inmates Linda, "Sister Susie" and Aunt Maggie and prison matron Noonan .

Unlike most films of the women in prison genre.. her fellow inmates are criminals, rather than women in prison by mistake. Taylor gets herself involved in a prison escape, has a year added to her sentence, and goes looking for revenge after she is released. 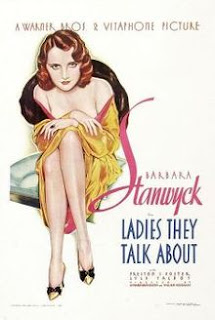 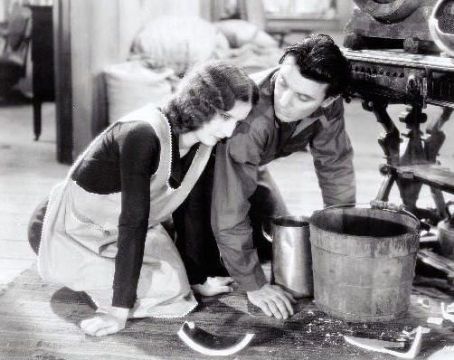 Singer Joan Gordon, who has been performing on Broadway, runs away from her gangster boyfriend Eddie Fields, to marry Don Leslie, who promises her a better life. Her plans are ruined when, Don's father finds out about her past relationship with Eddie. After, Don breaks it off with her, she decides to run away from town, rather than returning to Eddie.

In Montreal, she changes her name and starts working as a performer.

Things are going well until one of Eddie's men recognizes her and informs her boss. Joan, decides to trade places with the hotel's maid, who had used her picture when writing a North Dakota farmer, named Jim Gilson. She then pays the maid a lot of money for the farmer's address and Joan becomes the mail-order bride.

They begin their relationship has a rocky start, when Joan suggests that they sleep apart.

Over time, Joan, falls in love with him and tries to win his affection, but.. Jim is not interested. He is more worried that he will lose his land if he can not make any money. Even though he is certain that his wheat can save his land, but.. he has to convince farmer Bull McDowell, who has offered to buy his land in exchange for Joan's company.

Despite, not being in love with Joan, he is unhappy with another man showing any interest in her and starts a fight with him.

Sometime later, Joan drives out to an woman who is giving birth. She helps the woman and her adolescent daughter, and then travels through a snow storm to return home to her husband. Once she arrives, Jim tells her that he has taken in a man who was injured during the storm. She sees that the man is Eddie. She pretends not to know him, but Eddie tries to take her with him.

Realizing that his wife's past is a big lie, Jim suggests that she leave with Eddie. Joan, refuses to leave him and even goes as far as asking Eddie for a loan to save Jim's land. Through the loan, Jim is allowed to pay of his debts until after the harvest.

Bull, has set the farm on fire and Joan and Jim, are able to put out the fire. But...will Jim ever forgive her lies and admit that he loves her? 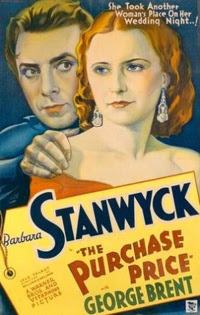 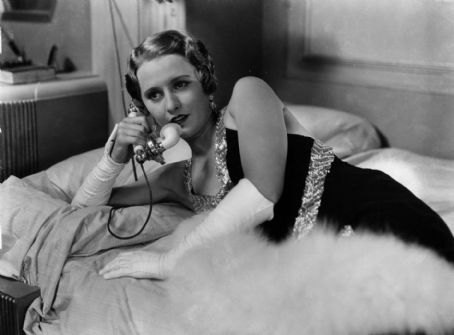 Forbidden (1932). A melodrama film directed by Frank Capra. Cast: Barbara Stanwyck, who plays a librarian who falls in love with a married man played by Adolphe Menjou, with a tragic ending. 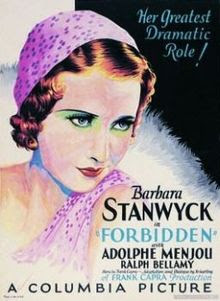 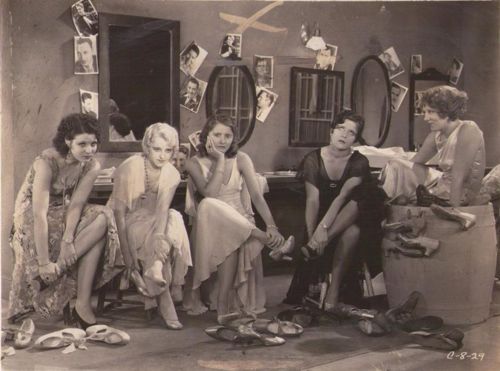 Ten Cents A Dance (1931). Is a romantic drama film starring Barbara Stanwyck, who plays as a married dancer who falls in love with one of her customers. The film was inspired by the popular song of the same name, which is sung over the title sequence. 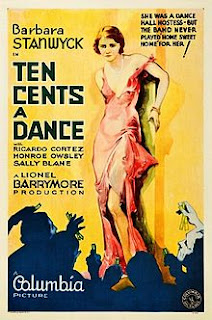 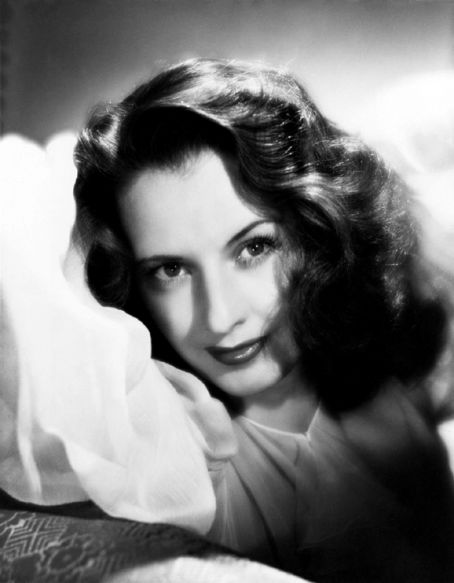