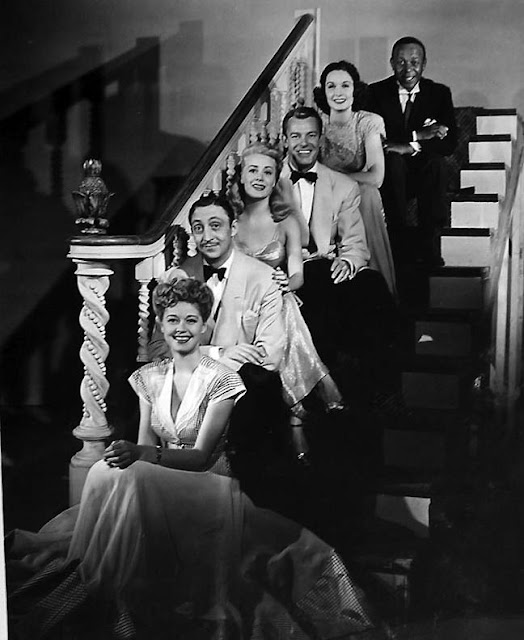 Brewster's Millions (1945), is one of the many of adaptations of the novel of the same name by George Barr McCutcheon. The film was banned in Memphis, Tennessee because the character of an African-American servant, portrayed by Eddie "Rochester" Anderson, was treated too well. Directed by Allan Dwan. Cast: Dennis O'Keefe, Helen Walker and June Havoc.

Soon after getting out of the Army, Montague "Monty" L. Brewster learns that his uncle, who made his money in Bolivian tin, has died and left him eight million dollars. Monty, who is engaged to Peggy Gray, is thrilled, but.. learns from his uncle's lawyer, Swearengen Jones, that the will stipulates that he must spend one million dollars by noon on his thirtieth birthday to receive the rest of the money.

After learning that the one million dollars cannot be spent frivolously or given away, Monty, thinks that he can spend the million in two months time without any problem, until.. Jones informs him that he cannot marry during the sixty days and must swear a vow of secrecy of the will's terms(so his friends can't help or hinder him).

Peggy, becomes concerned that the money has already changed Monty, when he says he must postpone the wedding, until he gives her an expensive engagement ring.

Monty's Army buddies, Noppy Harrison and Hacky Smith, are also confused by Monty's sudden wild spending spree, but.. agree to help him with his new business, Brewster and Co. Within a week, Monty has spent $300,000 on bad investments and a lavish party hosted by heiress Barbara Drew and over paying his employees.

His plan begins to backfire when, his bad investments start paying off and he learns that he has won a $25,000 radio contest.

Also Peggy, is becoming jealous of Barbara and angry over his spending habits.

Looking for a way to spend his money, Monty decides to put $95,000 into a Broadway production, starring chorus girl Trixie Summers and buys her a fur coat as an investment. As hoped, the play is a flop, but Nopper and Hacky, close the show and lease the theater, before the show loses any more money.

Monty decides to take the production on board the expensive Drew family yacht and conduct a goodwill tour of East Coast naval bases. After, postponing his wedding again, believing that Monty is interested in both Barbara and Trixie, Peggy breaks off their engagement.

On advice from her mother, Peggy changes her mind and makes up with Monty. Until, Peggy,sees her engagement ring, on Trixie's finger.

After Peggy, threatens to get off the ship in Florida, Monty orders the ship's captain to sail directly to the Caribbean. Nopper and Hacky, convince the captain to head back to New York.

To add to his problems, the cast of the show announces that they are donating their services for the war effort. Monty's fortune appears lost until the yacht hits a floating mine and Monty hires the Navy to tow the damaged boat for $400,000.

Back in New York, on his thirtieth birthday, Monty, having spent the one million dollars, waits for Jones with his receipts. Wanting to help, Nopper, Hacky, Trixie, Barbara and the Grays's servant Jackson insist on giving money to the now broke Monty.

Monty is $40,012 richer by the time Jones shows up, but as the clock starts to strike twelve... will he figure out a way to get rid of his new found earnings? 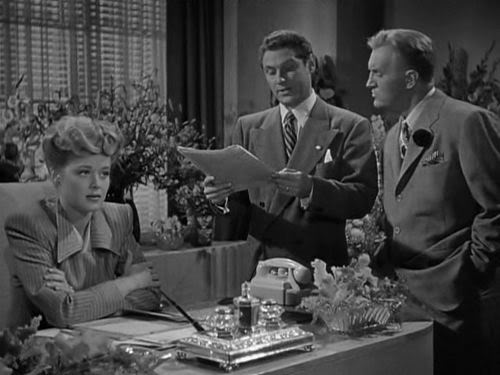 This film is just a fun way to spend a Sunday afternoon and maybe, think up a few ways you would spend the money to earn the inheritance.. 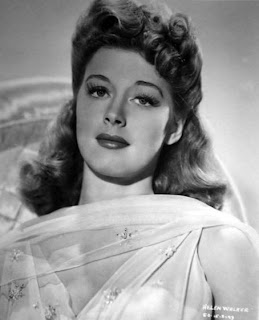 She was a successful actress on Broadway and in 1942 her performance in the play "Jason" was so impressive that she was signed up to act in films.

During the mid-1940's she had continued success with performances in successful films: The Man in Half Moon Street (1945), Brewster's Millions (1945) and the murder spoof Murder, He Says (1945), which starred Fred MacMurray.

She landed the starring role in the film Heaven Only Knows (1947) and things were going very well for her, but.. all that changed on December 31, 1946, while driving the car of director Bruce "Lucky" Humberstone from Palm Springs to Hollywood, she gave a ride to three hitchhiking soldiers named Robert E. Lee, Philip Mercado, and Joseph Montaldo.

Near Redlands, California, the car hit a divider and flipped over, killing Lee and causing serious injuries to Helen and the other two passengers.

She was charged with drunk driving and reckless driving, and Mercado brought a civil suit for $150,000 against her.

Her criminal trial for manslaughter ended with a dismissal on the motion of San Bernardino County District Attorney Jerome B. Kavanaugh.

When her house burned in 1960, other actresses held a benefit to help her. 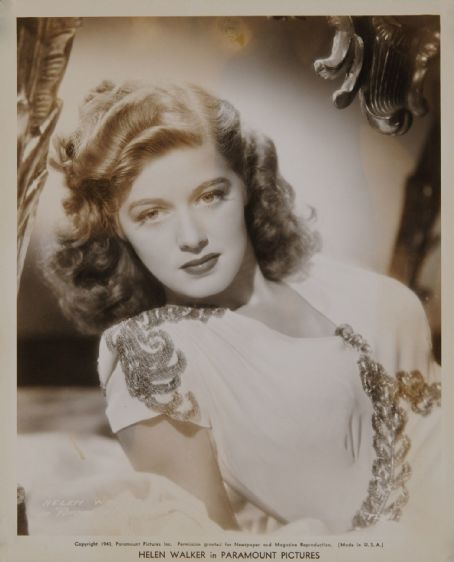