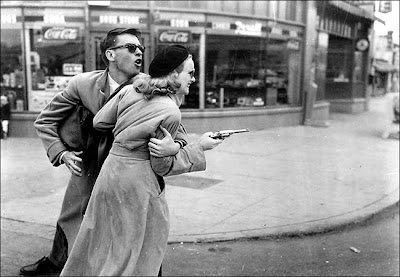 Gun Crazy(1949). Noir. Cast: Peggy Cummins and John Dall. Director: Joseph H. Lewis, and produced by Frank King and Maurice King. Screenplay: Dalton Trumbo (credited to Millard Kaufman because of the Hollywood Blacklist), and MacKinlay Kantor was based upon a short story by Kantor published in 1940 in The Saturday Evening Post Gun Crazy was selected for the National Film Registry, and is also known as... Deadly Is the Female.(1950).

The bank robbery scene was done in one take, with no one except the actors and people inside the bank knowing that a movie was being filmed. When John Dall as Bart Tare says, "I hope we find a parking space," he really meant it. At the end of the scene when someone in the background screams that there's been a bank robbery... this was a bystander who saw the filming and really thought there was a bank robbery going down. 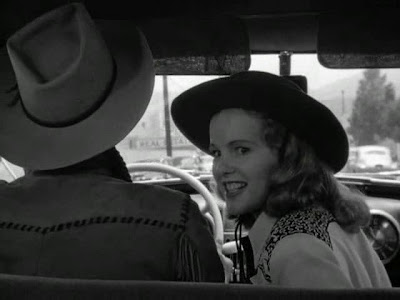