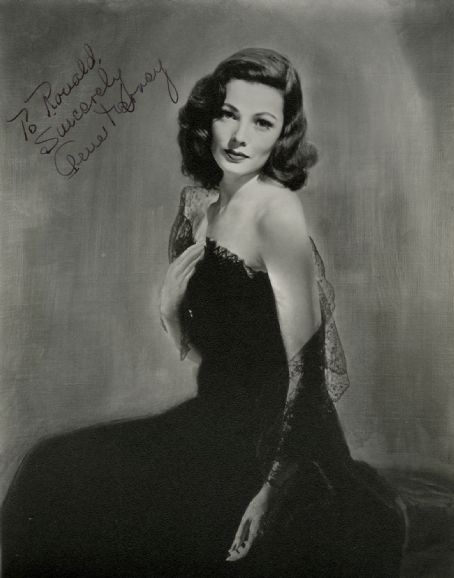 Laura (1944). A film noir directed by Otto Preminger. Cast: Gene Tierney, Dana Andrews, Clifton Webb and Vincent Price. The screenplay by Jay Dratler, Samuel Hoffenstein, and Elizabeth Reinhardt is based on the 1943 novel of the same title by Vera Caspary.

Dana Andrews, plays the perfect detective, who becomes obsessed with the portrait of Laura while investigating her death. Clifton Webb, plays Waldo Lydecker, who's also as obsessed with Laura.

Gene Tierney's, was never more beautiful, in her small part as a advertising executive, but.. if you are expecting her to look like the glamorous woman in the painting, you might be a little disappointed.

I'm also a huge fan of Vincent Price. Although, it was very odd to see him play such a cad.. 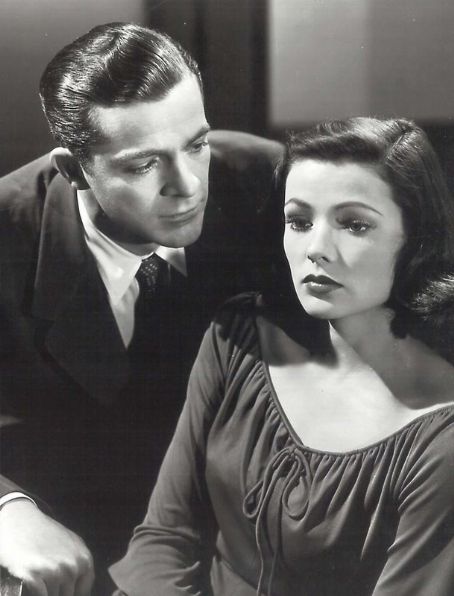 Signed on to investigate the brutal murder of Laura Hunt, New York police lieutenant Mark McPherson goes to question Laura's good friend, columnist Waldo Lydecker in his lavish apartment. Waldo, has read about Mark and his arrest of notorious gangster in the newspapers. Mark knows that Waldo, wrote about a murder committed the very same way that Laura was killed.

Waldo, asks if he can join up with Mark on his investigation, because.. he wants to see everyone's reaction, while being questioned, maybe... he could use the information for his next project. They both call on Laura's aunt, the wealthy Ann Treadwell. He asks her if she approves of Laura's marriage to Shelby Carpenter. Mark, then asks about Ann's relationship with Laura's fiance Shelby, saying that he has evidence that she has been giving him money.

Shelby, a charming, creepy, womanizer.. and born suspect, arrives and says that he and Laura were to be married later that week. Waldo, corrects him and said that Laura had not yet decided to go through with the wedding. Mark asks Shelby, if he has a key to her country home? He says "no, but.. there might be a key in her apartment".

Shelby, Mark and Waldo, all go to Laura's well decorated apartment and after Shelby hands over the key, that he had hidden in his pocket. When they discover his lie, Waldo accuses him of murder.

Later, Waldo invites Mark to his and Laura's favorite restaurant, Algonquin. Waldo, takes this opportunity, to share his story about the first time he met Laura, five years ago on her 22nd birthday:

Waldo, was dining alone when he is approached by Laura, who asks Waldo to endorse a pen for her company, but... he quickly dismisses her. Right before she leaves, she calls him a selfish, lonely man. Sorry, for being so rude Waldo goes to see Laura at the agency where she works. He apologizes and agrees to the endorsement. 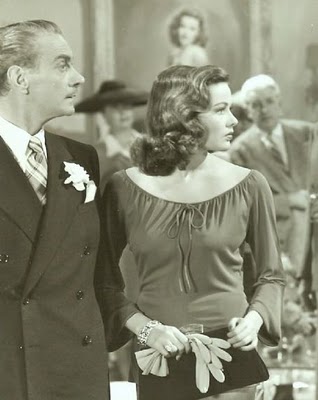 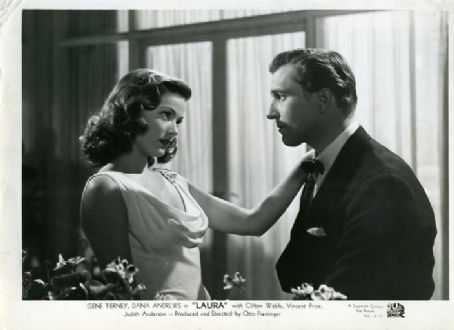 At one of Ann's parties, Laura meets Shelby, who confesses that his family has been bankrupt for years. After, Laura gives him a job at the advertising agency, they become engaged to be married.

Of course.. Waldo has Shelby investigated and informs Laura that her fiance is dating a model, Diane Redfern. Laura, does not believe him until he shows her a gold cigarette case that she gave Shelby, saying he bought it at the pawn shop where Diane pawned it.

Back in the restaurant, Waldo tells Mark that Laura had lunch with Diane the day of her death and was planing to go to her country home for a few days to think things over. 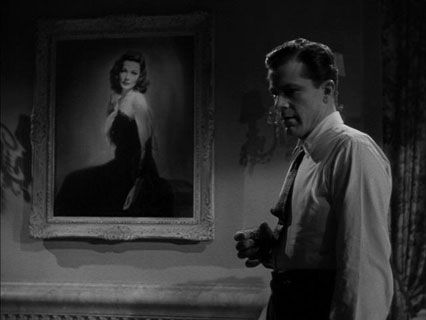 The following night, Mark, who seems to be falling in love with Laura's ghost, returns to the apartment and continues searching through her letters and diary. Waldo, stops by and says he knows Mark, has put in a bid for Laura's portrait and accuses him for falling in love with her.

After, Waldo leaves, Mark falls asleep under the portrait. He wakes to the sound of someone entering the room...Could it be the killer? 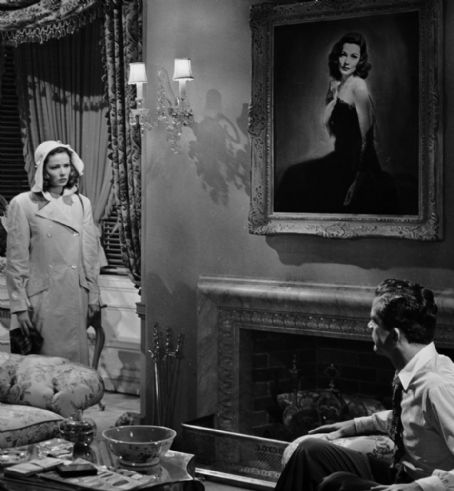 Darryl F. Zanuck was opposed to casting Clifton Webb because of Webb's homosexuality, but producer/director Otto Preminger prevailed and the 54-year-old Webb, making his first screen appearance since the silent era, was nominated for an Oscar.

The portrait of Laura is, a photograph done over with oil paint.

The original choice for the role of Laura was Jennifer Jones, who turned it down.

One of the film's most durable legacies was its theme song "Laura," composed over one weekend by David Raksin. Otto Preminger had originally wanted to use Duke Ellington's "Sophisticated Lady." According to Preminger biographer Gerald Pratley, Preminger tried to get the rights to George Gershwin's "Summertime" but was unable to.

This movie is famous for the haunting "Laura Theme". When asked why she had turned down the part of Laura, Hedy Lamarr said, "They sent me the script, not the score."

Gene Tierney, originally did not want to make this film but did it under contract obligations.

The famous theme song David Raksin wrote for the film was originally entitled "Judy" in honor of Judy Garland.

According to her auto-biography, Rosalind Russell was offered the role of Laura, she felt the part was too small and turned it down. 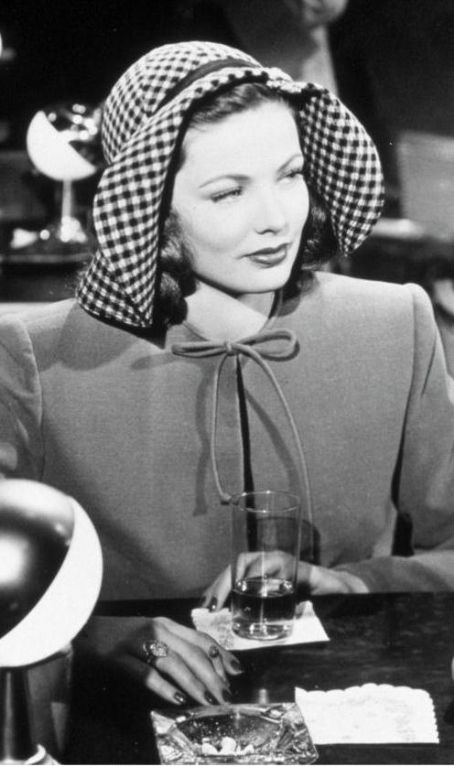 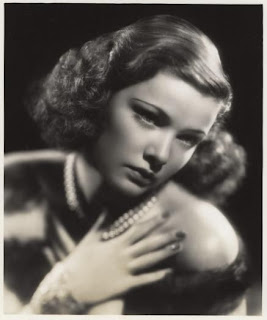 Gene Tierney's, best movie performances in my opinion all took place in the 1940's. Starting with her movie debut playing a reporter for the newspaper, The Denver Star. In the film, The Return of Frank James (1940).

Later, She landed a small role in, Hudson's Bay (1941). A historical drama, about a couple of French-Canadian explorers who formed the Hudson's Bay Company..

In 1941, Tierney co-starred in the comedy, Tobacco Road, directed by John Ford.

At the age of 20, she also had a title role in, War film, Sundown. The film's an adventure story, set against a World War II in British East Africa, earning three Academy Award nominations. I enjoyed this film much better than I thought I would.

Video: in my opinion is when she looked her best.

Next, she went on to film one of my favorite films: The Shanghai Gesture. This early film noir is about the lives and secret pasts of the leading characters, who enjoy gambling in a luxurious casino owned by "Mother" Gin Sling. The Shanghai Gesture received Academy Award nominations for Best Art Direction (Boris Leven) and Best Original Music Score.

The following year, she performed in, Son of Fury: The Story of Benjamin Blake, along with the dual role in the screwball comedy film, Rings on Her Fingers, Thunder Birds, China Girl and in the 1943 comedy, Heaven Can Wait.

In 1944, she starred in what became her most famous role in the film noir, Laura.

After performing in the film, A Bell for Adano (1945) as a blonde, she played in one of my favorite characters of all time.. the jealous, narcissistic femme fatale Ellen Berent Harland, in the film version of the best-selling Ben Ames Williams novel... Leave Her to Heaven, a performance that won her an Academy Award nomination for Best Actress (1945). Leave Her To Heaven was 20th Century-Fox's most successful film of the 1940's. It was cited by acclaimed director Martin Scorsese as one of his favorite films of all time.

In 1946, Tierney starred in the film, Dragonwyck. That same year, she starred in another favorite film, The Razor's Edge, an adaptation of W. Somerset Maugham's novel.

She followed that performance with her role in another one of my favorite films, The Ghost and Mrs. Muir (1947), which many critics have noted to be her greatest performance besides Laura (for which she did not receive an Academy Award nomination for Best Actress.

The following year, Tierney starred in the screwball comedy, That Wonderful Urge (1948). As the 1940's came to a close, Tierney performed in the classic film noir, Whirlpool (1949). 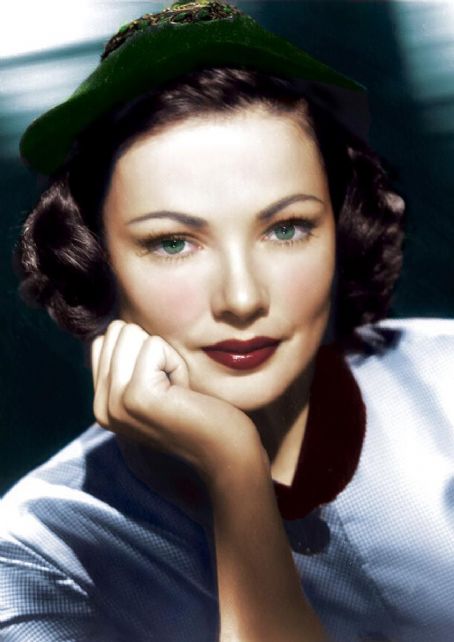 This is my contribution to the Classic Movie Blog Association's Fabulous Films of the 1940's Blogathon. Please click on poster located on the side bar to see all participating blogs. 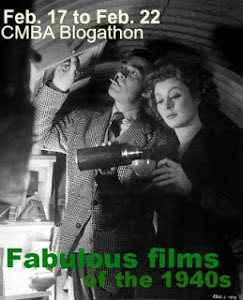