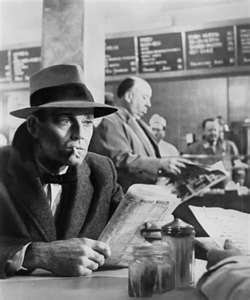 The Wrong Man (1956). Alfred Hitchcock film which stars Henry Fonda and Vera Miles. The film is based on a true story of an innocent man charged for a crime he did not commit. The story was based on the book The True Story of Christopher Emmanuel Balestrero by Maxwell Anderson and the article "A Case of Identity" (Life magazine, June 29, 1953) by Herbert Brean. It was one of the few Hitchcock films based on a true story, and unusually for Hitchcock, the facts of the story were not changed much.

The story begins when Manny, a Stork Club bass fiddle player, returns home to find his wife Rose still awake, with a toothache. Manny suggests, that they borrow against her insurance, to pay for the dentist.

Knowing, that he has to be home at 5:30 to give his two sons music lessons, Manny visits the insurance company to see about the loan. There, the clerks believe that he looks like the man who robbed them a month ago. They call the police, who wait outside Manny's home to pick him up and drive him to the station. After.. asking Manny about his finances, the police believe that he has a motive to steal money.

They drive him to the places that have been robbed and ask the clerks if he is the man who robbed them. Many of the victims are not sure if Manny, is the thief, so the police ask the insurance clerks to identify him.

Because Manny's printing is similar to the robber's, they ask him to print out a note. Manny, misspells the word "drawer" as "draw," which is the same way the robber spelled the word and they take him into custody.

Rose, worries that he has been in an accident, because has never been late before. By the time the police notify Rose, Manny's mother and sister and brother-in-law, Gene are waiting with her.

The next morning, Manny is taken to the felony court where a trial date is set. Even with his attorney's request for leniency, the judge sets the bail at $7,500. After she raises the money for Manny's bail, Rose calls lawyer Frank D. O'Connor, who has been recommended to Manny's mother.

O'Connor, asks Manny, to try to remember where he was on the dates of the robberies. The Balestreros, remember that they were vacationing in Cornwall, New York playing cards with three men.

Rose and Manny, try to track down the three men with no luck. Manny, then remembers at the time of the second robbery, he was at his dentist, who confirms that he was there. They hope to use the information in court.

Rose, becomes extremely depressed and when her behavior deteriorates, Manny takes her to a doctor, who admits her to a sanitarium for her own good.

As Manny's trial begins, one of the jurors, who has already made up his mind about the case, asks the judge if they "have to sit and listen to this?", the judge calls for a mistrial.

Soon after, a man holds up a delicatessen. The owner signals to her husband, who holds him, while she phones the police. The robber is arrested and brought into the police station, where, in the hallway, he passes a detective working on Manny's case. The robber looks a lot like Manny and the detective follows up on his hunch. Will The charges against Manny be dropped and the right man be charged with the crime?

Henry Fonda, gives one of his grimmest performance and Bernard Herrmann's score is very effective building on the suspense.

When Manny (Henry Fonda) is taken to prison was filmed in a real prison...as he is led to his cell , you can hear one of the inmates shout, "What'd they get ya for, Henry?" and several of the other prisoners laughing.

Alfred Hitchcock: narrating the film's prologue. The only time he actually spoke in any of his films. 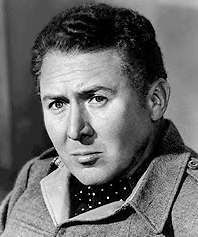