Happy Birthday: Veronica Lake (November 14, 1922– July 7, 1973) was a film actress and pin-up model. She received both popular and critical acclaim, most notably for her role in Sullivan's Travels and her femme fatale roles in film noir with Alan Ladd during the 1940s, and was well-known for her peek-a-boo hairstyle. Click picture on side bar to learn more about Veronica Lake.

On TCM Nov. 14th The Blue Angel (1930). Directed by Josef von Sternberg in 1930, based on Heinrich Mann's novel Professor Unrat. The film is considered to be the first major German sound film and it brought world fame to actress Marlene Dietrich. In addition, it introduced her signature song, Friedrich Hollaender's "Falling in Love Again (Can't Help It)".

ON TCM Nov. 14th. She (1965). An Edwardian archaeologist and two companions stumble on a lost city in the Middle East run by a beautiful queen whose love holds the promise of immortality.

ON TCM Nov. 14th. Shanghai Express(1932). The pre-Code picture stars Marlene Dietrich, Clive Brook, Anna May Wong, and Warner Oland. It was written by Jules Furthman, based on a story by Harry Hervey. It was the fourth of seven teaming of Sternberg and Dietrich.

ON TCM Nov.16th. To Be Or Not To Be (1942).Comedy directed by Ernst Lubitsch, about a troupe of actors in Nazi-occupied Warsaw who use their abilities at disguise and acting to fool the occupying troops. It was adapted by Lubitsch (uncredited) and Edwin Justus Mayer from the story by Melchior Lengyel.

ON TCM Nov. 16th. She Done Him Wrong(1933). The movie is famous for West's many double entendres and quips, including her seductive, "I always did like a man in a uniform. That one fits you grand. Why don't you come up sometime and see me? I'm home every evening."

ON TCM Nov.16th. I'm No Angel(1933). Mae West's third motion picture. West received sole story and screenplay credit. A young Cary Grant plays her leading man for the second time. Being Pre-Code, this was one of the few Mae West movies that was not subjected to heavy censorship. The film was directed by Wesley Ruggles

Happy Birthday: Rock Hudson! (November 17, 1925 – October 2, 1985), was a film and television actor, recognized as a romantic leading man during the 1950s and 1960s, most notably in several romantic comedies with Doris Day. Please click picture on side bar to learn more about Rock Hudson.

Happy Birthday: Gene Tierney!(November 19, 1920 – November 6, 1991) was a film and stage actress. One of the great beauties of her day, she is best remembered for her performance in her role in Laura (1944) and her Academy Award-nominated performance for Best Actress in Leave Her to Heaven (1945). Click picture on side bar to read past reviews.

Noir and Chick Flicks will be participating in: For The Boys Blogathon. November 19-20, 2011.

Happy Birthday: Goldie (born November 21, 1945), actress, film director, producer, and occasional singer. Hawn is known for her roles in Rowan and Martin's Laugh-In, Private Benjamin, Foul Play, Overboard, Bird on a Wire, Death Becomes Her, The First Wives Club, and Cactus Flower, for which she won the 1969 Academy Award for Best Supporting Actress. Click picture on side bar to learn more about Goldie.

Video: First of 5. Goldie: Inside The Actors Studio interview. 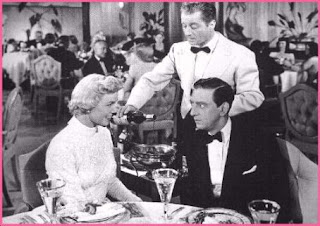 place the ICE CUBES in a blender and
whizz. Add the rest of INGREDIENTS
and BLEND until SMOOTH. pour into glass
and SERVE CHILLED, garnished with extra
CRANBERRIES and BLUEBERRIES 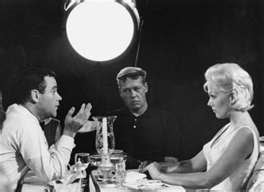 Article of the week is from : Blamemameblog: Notorious Landlady(1962). Craig says: Every time I watch a movie like the one I did tonight, 1962's The Notorious Landlady, and I enjoy it so much... I always ask myself, "What if I never discovered this picture?" I say that because I loved this picture so much! From start to finish, it had me hooked. How could you go wrong with a comedy/mystery starring Jack Lemmon, Fred Astaire, and Kim Novak? Please click on link to read Craig's  awesome review.

On Emily's blog, Arthur Recreates Scenes From Classic Movies Arthur's mom Emily, posts the cutest photographs of her son, in classic poses from some of her favorite classic movies. All I have to say is OMG, way too cute!

Have a great week at the movies!
Posted by Dawn at 2:32 PM