For the Boys Blogathon 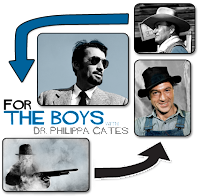 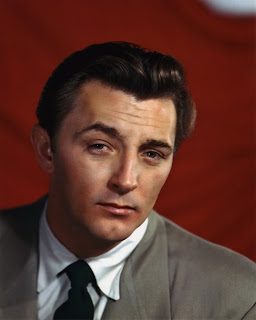 What I think men most like about the western/film noir actor Robert Mitchum, is how he swaggered through the wildness of his youth and became very independent man. Without a doubt, one of Mr. Mitchum's best films is also his favorite performance, The Night of the Hunter (1955). His performance as Reverend Harry Powell, is considered by many to be one of the most suspenseful of his career.

The film begins when family man Ben Harper, is sentenced to hang for his part in a robbery in which two men were killed. Before he is caught he hides the stolen money, telling only his son John, where the money is.

Reverend Harry Powell, a serial killer and posing as preacher with the two words "LOVE" and "HATE" tattooed across his knuckles, shares a prison cell with Harper. While Harper sleeping, Powell over hears him say: "And a little child shall lead them."

Powell, now believes that Harper's children, are the only ones who know the secret of where the money is and to win their trust, marries their mother, Willa. Powell, asks the children about the money and John becomes suspicious of Powell and does not trust him. Willa, overhears her new husband questioning the children and now that she knows the truth, he kills her.

After Powell dumps her body, you see a beautiful/horrific under water scene of her sitting in the car at the bottom of the pond. He learns where the money is and the children escape down the river with the money. The river scene is one of many moments of pure beauty and the music keeps you drifting along.

They find safety with an eccentric old woman named, Rachel Cooper. Powell, eventually catches up with them, but Rachel knows that he is evil and takes matters into her own hands.

The cat and mouse game, between Reverend Harry Powell and young John, will keep you sitting on the edge of your seat.
Posted by Dawn at 4:05 AM