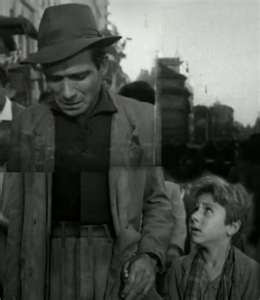 ON TCM Oct. 15th. The Bicycle Thief (1948). Italian neorealist film directed by Vittorio De Sica. It tells the story of a poor man searching the streets of Rome for his stolen bicycle, which he needs to be able to work. The film is based on the novel of the same name by Luigi Bartolini and was adapted for the screen by Cesare Zavattini. It stars Lamberto Maggiorani as the poor man searching for his lost bicycle and Enzo Staiola as his son.

Happy Birthday: Angela Lansbury!(born 16 October 1925), is an English actress and singer in theatre, television movies, whose career has spanned eight decades. Her first film performance was in the film, Gaslight (1944) as a conniving maid, for which she received an Academy Award nomination. Among her other films are: The Manchurian Candidate (1962), Bedknobs and Broomsticks (1971), Beauty and the Beast (1991), and Anastasia (1997).

ON TCM Oct. 17th. The Strawberry Blond(1941). Directed by Raoul Walsh. Cast: James Cagney and Olivia de Havilland and features Rita Hayworth, Alan Hale, Sr., Jack Carson and George Tobias. It was nominated for an Academy Award in 1941 for Best Scoring of a Musical Picture. The film features songs such as "Bill Bailey", "Meet Me in St. Louis, Louie," and "The Band Played On". The title is most often listed with the The, but the film's onscreen titles and all its posters call it simply, Strawberry Blonde. Director Walsh remade the film in 1948 as, One Sunday Afternoon.

Happy Birthday Rita Hayworth!(October 17, 1918 – May 14, 1987), was a film actress and dancer who was famous during the 1940s as one of the era's top stars. She performed in 61 films over 37 years. Please click picture on side bar to learn more about Rita Hayworth.

Happy Birthday: Spring Byington!(October 17, 1886 – September 7, 1971) . Her career included a seven-year run on radio and television as the star of December Bride. She was a key MGM contract player appearing in films from the 1930s through the 1960s. Please click picture on side bar to learn more about Spring.

Happy Birthday: Montgomery Clift!(October 17, 1920 – July 23, 1966). Played outsiders, like in the films: A Place in the Sun, I Confess, From Here to Eternity, and The Young Lions. Please click picture on side bar to learn more about Montgomery.

ON TCM Oct. 18th. On Moonlight Bay(1951). A musical film directed by Roy Del Ruth which tells the story of the Winfield family at the turn of the century. The movie is based loosely on the Penrod stories by Booth Tarkington. There was a 1953 sequel, By the Light of the Silvery Moon.

ON TCM Oct. 19th. Is a 7 movie tribute to Elvis. His versatile voice was successful in many genres, country, pop, gospel, and blues. He is the best-selling solo artist in the history of popular music. Please click picture on side bar to learn more about Elvis.

Mister Ed, a palomino horse who could talk ("played" by gelding Bamboo Harvester and voiced by former western star Allan Lane), who went uncredited for the entire length of the series and his owner, an eccentric and enormously klutzy yet friendly architect named Wilbur Post (portrayed by Alan Young). Please click picture to on side bar to view the TV show. 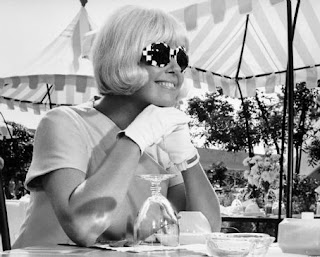 JUICE together the grapefruit
and CRANBERRIES, then add the
APPLE and blend together.
pour, into a glass OVER ICE
and SERVE CHILLED.

Article of the week is from: Classic Film and TV Blogspot : Robin Ellis talks with Cafe about. his cookbook.

What a thrill it was to read Ricks interview with Robin Ellis, who has a successful career in television, film, and stage. Diagnosed with type II diabetes, he wrote a cookbook for diabetics: Delicious Dishes for Diabetics: Eating Well with Type-2 Diabetes. Robin, graciously agreed to an interview with the Café. Please stop by to check out this awesome post. 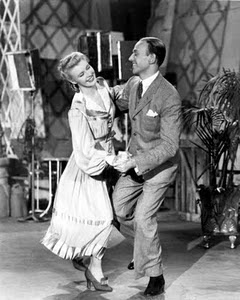 Monty's exciting "GREATEST MUSICALS TOURNAMENT", is down to the finals. Please stop by to see which musical is every ones all time favorite. It is going to be a very hard decision, they are all such wonderful films. 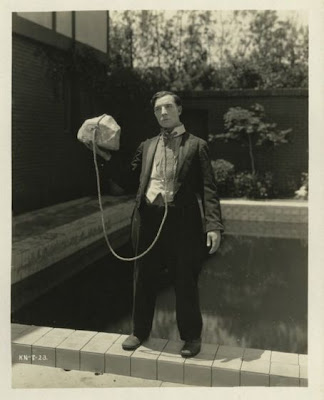 Buster Keaton Series Continues...
Posted by Dawn at 4:57 AM