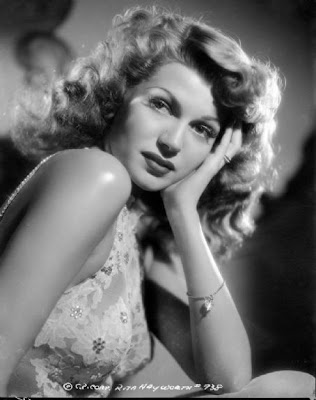 Rita Hayworth, one of the great beauties of her era, was also a very talented actress, dancer, and comedian. She started her performing career partnered with her father, in a dancing team called, "The Dancing Cansinos". At that time Hayworth, was not of legal age to work in the California's nightclubs and bars, so.. she and her father traveled across the border to the city of Tijuana, Mexico, a popular tourist spot of the 1930s.

It was at the Caliente Club where Hayworth was first spotted by the head of the Fox Film Corporation, Winfield Sheehan. Hayworth, found herself in Hollywood making a screen test for Fox. Sheehan, signed Hayworth to a six-month contract.

There Hayworth, performed very small roles in five pictures. By the end of her six-month contract, Zanuck decided not to renew her contract. Judson, found a place for her in lead roles with Columbia Pictures. Studio head Harry Cohn, signed her to a long-term contract.

Cohn, thought Hayworth looked too Mediterranean, which caused Hayworth to be cast into Hispanic roles. She decided to undergo electrolysis to broaden her forehead and accentuate her widow's peak. When Hayworth returned to Columbia, she was a redhead. 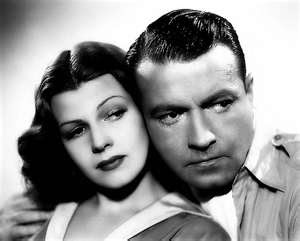 In 1939, Howard Hawks wanted Hayworth, for a small but important role in the film, Only Angels Have Wings, where she played the wife of disgraced flier Richard Barthelmess and one of Cary Grant's old flames.

Fun Fact:
When Rita Hayworth couldn't play her drunk scene well enough, Hawks told Cary Grant to throw a bucket of water on her head, dry her hair, and to only say his lines.

Cohn, next put Hayworth in the films: 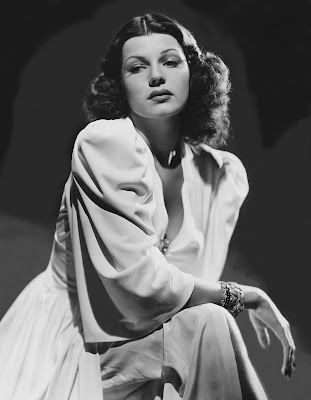 Music in My Heart (1940). This has to be one of the most underrated of Rita's films. A musical, which gives Rita's fans a chance to watch her dance. A wonderful 'boy meets girl' story, which begins when their cabs crash into each other, changing both their lives. 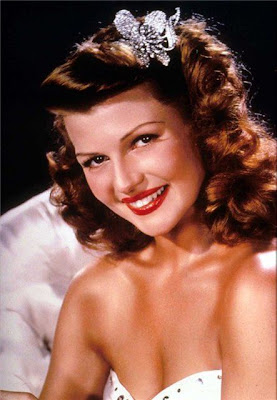 The Lady in Question(1940). This film is full of drama and smiles. The story begins when, Brian Aheme, a bicycle shop owner who wants to become a juror in a court case of Natalie Roguin. Andre Moestan, manages to talk the jury into setting her free. Andre, gives her a job in his bicycle shop and lets her live above his shop. Pierre Moestan, the son of Andre, falls in love with Natalie. It is great seeing a young Rita just starting out in her Hollywood career. 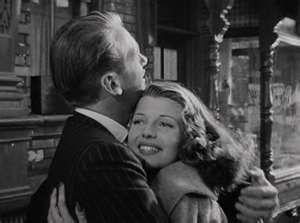 Angels Over Broadway(1940). Drama, in which a hustler, a showgirl, and an alcoholic playwright try to help an embezzler win back the money he stole.

Rita Hayworth, is wonderful in her part and was later, loaned out to Metro-Goldwyn-Mayer to perform in the films: 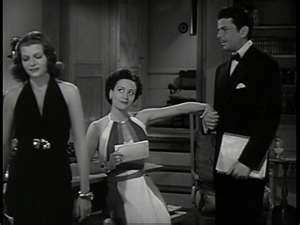 Susan and God(1940), with Joan Crawford. Rita Hayworth, has a small role as a young actress who married producer Nigel Bruce for her career. You just know that she was going to be a huge star from her performance in this film. 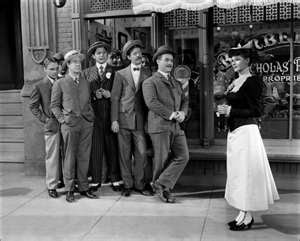 On loan to Warner Brothers, Hayworth performed as the second female lead in, The Strawberry Blonde (1941), opposite James Cagney and Olivia de Havilland.

Ann Sheridan, was originally cast as Virginia Brush, but had a salary dispute with Warner Brothers. The studio borrowed Rita Hayworth from Columbia.

Jack L. Warner, liked her work so much in this film that he used her in another romantic comedy, Affectionately Yours(1941). 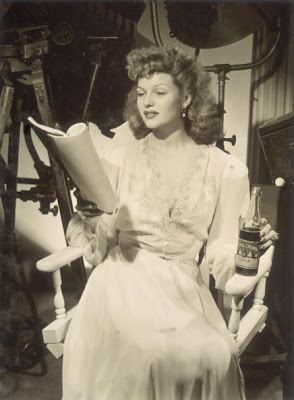 For me the best part of this fluffy film, is the love triangle, which at times it's hard to follow. 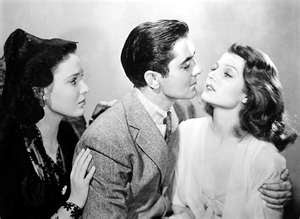 Her success in the film led to an even more important role in one of my favorite films, Blood and Sand (1941), with Tyrone Power and Linda Darnell. Rita Hayworth, performance as Dona Sol, launched her career as sex symbol. Her dance scene with Anthony Quinn, for me is one of the sexest dances on film. 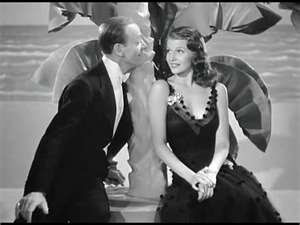 She returned to Columbia Pictures and was cast in the musical, You'll Never Get Rich (1941), with Fred Astaire in one of the highest-budgeted films Columbia had ever made. Astaire, plays a dance director who becomes attracted to dancer Hayworth, but is drafted into the Army. All of their dances are sensational. The 'big number' is the finale, the "Wedding Cake Walk". There is a dance number at the start of the film called "Boogie Barcarolle." The other number is Astaire and Hayworth's dress rehearsal "So Near and Yet So Far," a beautiful dance which showcases Hayworth in a sheer black gown. 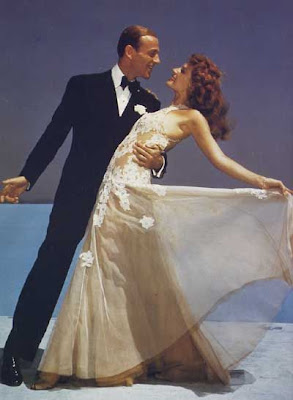 Their follow-up film, Rita's Favorite of her own films, You Were Never Lovelier(1942), is full of romantic complications and more beautiful dance numbers, performed by Fred Astaire, Rita Hayworth, and Xavier Cugat and his orchestra. The story is about, an American dancer who runs out of money while on vacation, in Buenos Aires and tries to get a job with hotel owner, Adolph Menjou. He soon meets Menjou's beautiful daughter Hayworth and compares her to the inside of a refrigerator. Trying to speed things along, Menjou starts sending his daughter orchids. Hayworth, believes that Astaire sent her the orchids and they fall in love. As a team, They only did two films together. This film includes the title song "I'm Old Fashioned", one of the most romantic dance numbers ever performed.

Hayworth, was the first dancer to partner with both Fred Astaire and Gene Kelly on film.

In 1942, Hayworth performed in two other pictures: 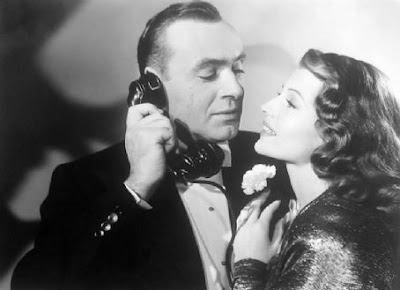 Tales of Manhattan. This movie leads us through many ups and downs all based around a tuxedo which seems to be jinxed. Charles Boyer, is drawn to beautiful Rita Hayworth. Thomas Mitchell, as the husband with a few ulterior motives of his own. The movie composed of 5 unrelated short stories. 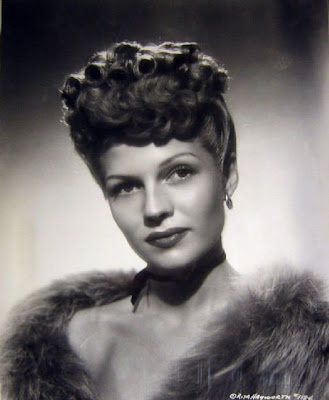 In the film, My Gal Sal. Studio head Darryl F. Zanuck originally wanted Carole Landis to play Sally Elliot, but she refused to dye her hair red and insisted she'd play it as a blonde. She was put in a secondary role and Rita Hayworth, borrowed from Columbia, since Alice Faye, expecting her first daughter, could not take the part.

Rita Hayworth's dancing partner in the number, "On The Gay White Way" is choreographer Hermes Pan.

The plot is fluffy and charming and you will love Rita Hayworth and Victor Mature, in this Gay 90s film..

It was during this period that Hayworth posed for a famous pin-up in Life Magazine, which showed her in a negligee perched seductively on her bed. When the U.S. joined World War II in December 1941, Hayworth, became one of the top two pin-up girls of the war years, the other being Betty Grable. 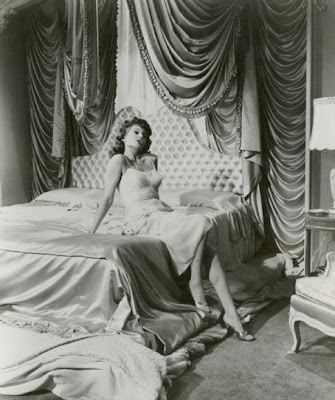 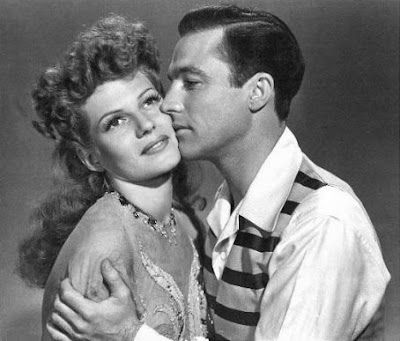 A wonderful story about a girl named Rusty Parker, who dreams of being on Broadway which means she would have to leave the small theater where she works with Danny and Genius. Every Friday night, they go to a local bar where they order oysters so they can look for a pearl. Rusty, learns that fame is not all that it is cracked up to be. The movie showcases the amazing talents of Rita and Gene Kelly.

During the middle of shooting Rita Hayworth eloped with Orson Welles. Coincidentally the film's wedding scene was shot that day. 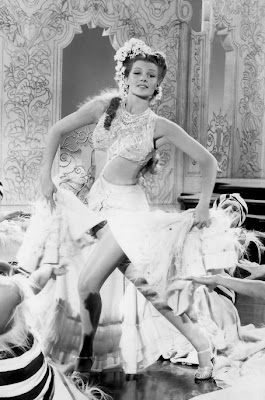 Tonight and Every Night (1945). Rita, was pregnant during production. So the musical numbers were filmed first, before the pregnancy began to show. As filming progressed, they did everything they could to hide her growing belly with muffs, furniture and purses.

The movie is set during the air attacks on London about a theater that never missed a performance. Many musical numbers are mixed in with the story involving Rita being romanced by Eagle Squadron RAF, Lee Bowman. Even though she's warned by her best friend Janet Blair, that Bowman's a wolf in Eagle Squadron uniform. Dancer Marc Platt, is also interested in her. 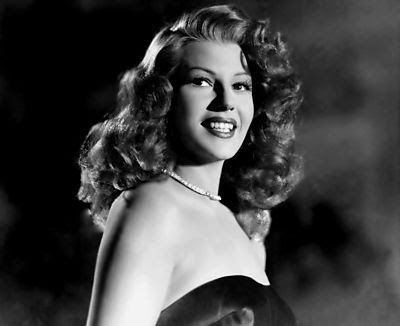 Her sex appeal was most notable in the film noir. Gilda (1946), with Glenn Ford, this film found some difficulty with censors, because Hayworth, performed a one-glove striptease. Hayworth's, performance is stunning and unforgettable. Put the Blame on Mame, is one of film history's more memorable scenes. Also, look out for the famous "hair-toss" scene. 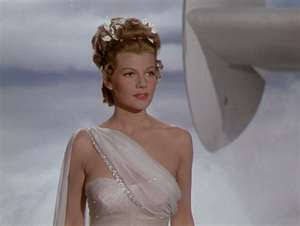 Down to Earth (1947). This comedy/fantasy story begins when, performer/producer Larry Parks, begins planning a musical comedy that is a satire of the Greek Gods. A Greek Muse, is not to happy that liberties are being taken with her relations so she comes down and lands the dancing lead to straighten things out. Rita Hayworth, is at the height of her screen fame when this film was made. 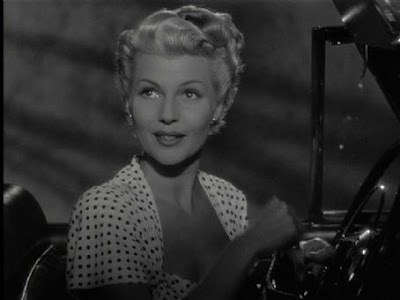 She delivered one of her most famous performances in, The Lady from Shanghai (1947). Its failure at the box office was blamed on Hayworth's famous red hair cut off and dyed blonde for her role. This was done without Cohn's knowledge or approval and he was furious over the change. 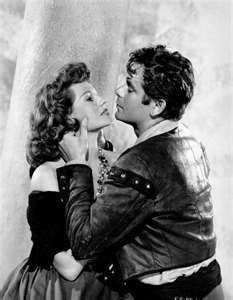 Her next film, The Loves of Carmen (1948), again with Glenn Ford, was the first film co-produced by Columbia and Hayworth's own production company, The Beckworth Corporation (named for her daughter Rebecca). 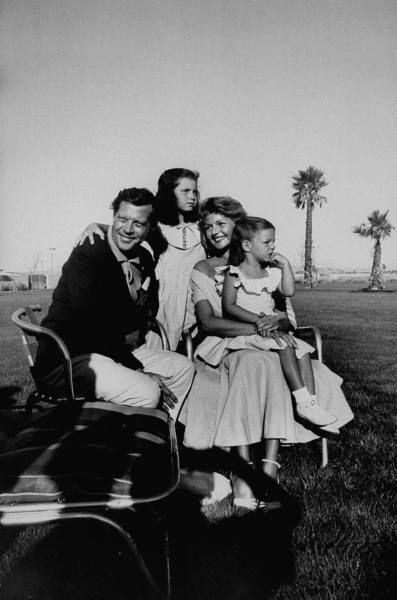