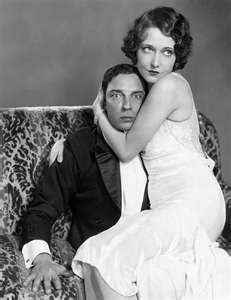 In 1950, Keaton had a show called, The Buster Keaton Show. A Live show with Buster recreating his classic routines.

He next went on to film, The Misadventures of Buster Keaton, who plays the wacky owner of a sporting goods store who moonlights as the director/producer of a small theatre.

Keaton, also appeared on Ed Wynn's variety show, at the age of 55.

In 1954, Keaton played his first television dramatic role in, "The Awakening", an episode of the series Douglas Fairbanks, Jr., Presents.

On April 3, 1957, Keaton was surprised by Ralph Edwards on the TV show, This Is Your Life.

The show promoted the release of the biographical film, The Buster Keaton Story with Donald O'Connor. 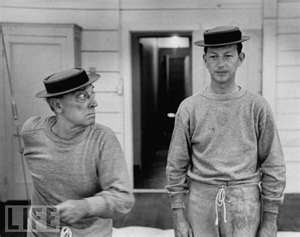 In December 1958, Keaton was a guest star as a hospital janitor who brings gifts to sick children in a special Christmas episode of, The Donna Reed Show. The program was titled "A Very Merry Christmas".

In August 1960, Keaton accepted the role of mute King Sextimus the Silent, in the national touring company of, Once Upon A Mattress, a successful Broadway musical. His wife Eleanor Keaton, was also cast in the chorus.

In 1960, Keaton returned to MGM for the final time, playing a lion tamer in, The Adventures of Huckleberry Finn(1960).

In 1961, he starred in The Twilight Zone episode "Once Upon a Time", which included both silent and sound sequences. Keaton played time traveler Mulligan, who traveled from 1890 to 1960, then back, using a special helmet.

Keaton, found steady work as an actor in TV commercials, including a popular series of silent ads for, Simon Pure Beer, in which he used some of the gags from his silent films.

In 1964, Keaton appeared with Joan Blondell and Joe E. Brown in the final episode circus drama in the, The Greatest Show on Earth. That same year, he appeared on Lucille Ball's TV show, The Lucy Show, in an episode ("A Day in the Park"), this featured him sitting on a park bench, reading a newspaper, which he unfolded into a huge, single sheet.

At the age of 70, Keaton suggested that, for his appearance in the 1965 film, Sergeant Deadhead, he run past the end of a fire hose into a six-foot-high flip and crash. When director Norman Taurog, was concerned for Keaton's health, Keaton said, "I won't hurt myself, I've done it for years!" Keaton, also starred in, Beach Blanket Bingo, Pajama Party, and How to Stuff a Wild Bikini (pictured below). 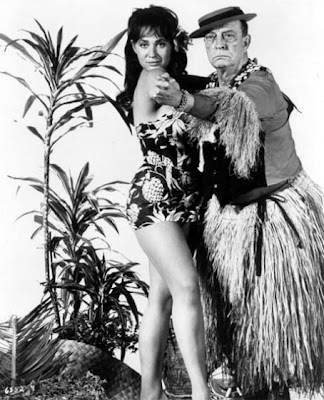 In 1965, Keaton starred in a short film called, The Railrodder, for the National Film Board of Canada. Wearing his porkpie hat, he travelled from one end of Canada, performing gags similar to those in films he made 50 years before. He later made a documentary about Keaton's life and times called, Buster Keaton Rides Again.

Also in 1965, he traveled to Italy to play a role in, Due Marines e un Generale, co-starring alongside with the famous Italian comedians, Franco Franchi and Ciccio Ingrassia.

Keaton's last film appearance was in, A Funny Thing Happened on the Way to the Forum (1966), which was filmed in Spain. He amazed the cast and crew by doing many of his own stunts, although they did use a stunt double for some scenes. 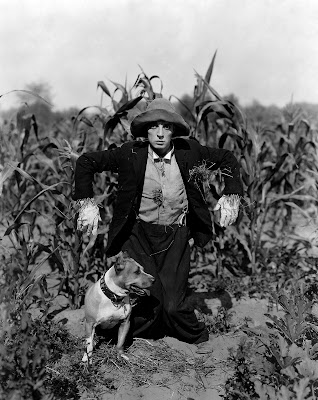