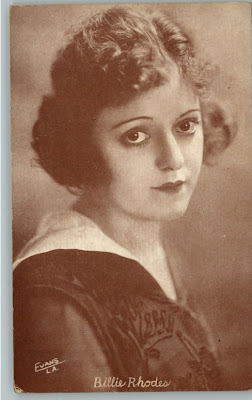 Despite having appeared in some 200 films, Billie Rhodes is completely forgotten today, even by the film buffs. Born Levita Axelrod in San Francisco on August 15, 1894, Billie had a brief stage career in stock and a tour on the Orpheum circuit. She entered films with the Kalem Company at the suggestion of director George Medford. Billie made her screen debut in the two-reel drama, “Perils of the Sea” (1913). At the close of her Kalem contract, Billie began to sing in nightclubs. 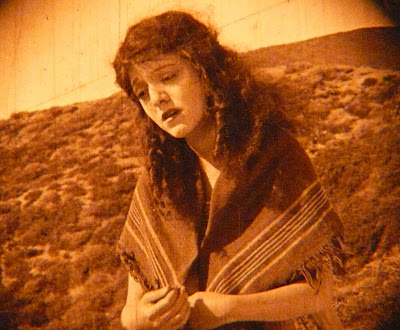 It wasn’t long before comedy producer Al Christie asked Billie to come over to his studio. Beginning in 1915, Billie was to appear in one comedy a week, under the direction of Al Christie, who was releasing his films through the Universal-controlled Nestor Company. Within a short time, Billie was being billed as “The Nestor Girl.” Billie was also seen in a minor role in Christie’s first feature-length production, “Mrs. Plum’s Pudding” (1915). When Christie entered independent production in the summer of 1916, he took Billie with him, and she was the star of his first independent production, “A Seminary Scandal” (1916). 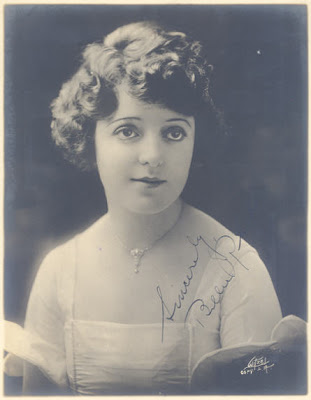 A comedian by the name of “Smiling Billy” Parsons persuaded Billie to leave Christie and embark on independent production. He starred her in a series of Capitol Comedies released through Goldwyn and a six-reel feature, “The Girl of My Dreams,” released by First National, all in 1918. The following year, Parsons starred Billie in three feature films, “Hoop-La,” The Lamb and the Lion,” and “The Blue Bonnet.” Parsons also married Billie on February 12, 1919, but it was a short-lived relationship as he died on September 28, 1919. The death of Billy Parsons came at a bad time for Billie because there was no one to guide her and later feature films like “Miss Nobody” (1920), “His Pajama Girl” (1921) and “Fires of Youth” (1924) did nothing for her career and were commercial and critical failures. Billie remarried in 1920, and in the mid-1920’s, she went back to the stage and to night club entertaining. Billie died on March 12, 1988. She was 93 years old.
Posted by Silentfilmfanatic at 5:05 PM