Peter Falk, (September 16, 1927 – June 23, 2011), was best known as the rumpled detective in "Columbo," which spanned 30 years was one of the most iconic characters. "Columbo" was part of the NBC Sunday Mystery Movie series, appearing every third week. The show became by far the most popular of the three mysteries, the others being "McCloud" and "McMillan and Wife."

Columbo, never had a first name. "He looks like a flood victim," Falk once said. "You feel sorry for him. He appears to be seeing nothing, but he's seeing everything. Underneath his dishevelment, a good mind is at work."

Columbo's trademark was an raincoat Falk had once bought for himself. After 25 years on television, the coat became so tattered it had to be replaced.

Falk made his film debut in, "Wind Across the Everglades(1958)" and established himself as a talented character actor with his performance as the vicious killer Abe Reles in, "Murder, Inc." Some of his other movies: "It's a Mad, Mad, Mad, Mad World," "Robin and the Seven Hoods," "The Great Race," "Luv," "Castle Keep," "The Cheap Detective," "The Brinks Job," "The In-Laws," "The Princess Bride."

Falk also performed in the films: Husbands, A Woman Under the Influence, Wings of Desire, in which he played himself. Falk became prominent in television movies, beginning with his first Emmy for, The Price of Tomatoes (1961). His four other Emmys were for "Columbo."

When not working, Falk converted his garage into a studio where he created charcoal drawings. 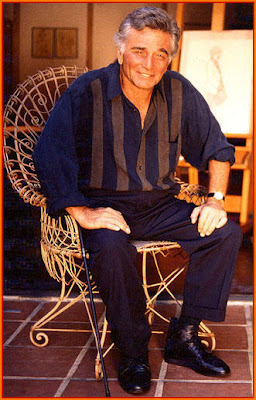 I will never forget his catch praise "Just one more thing..."

Email ThisBlogThis!Share to TwitterShare to FacebookShare to Pinterest
Labels: in memory(2011), peter falk