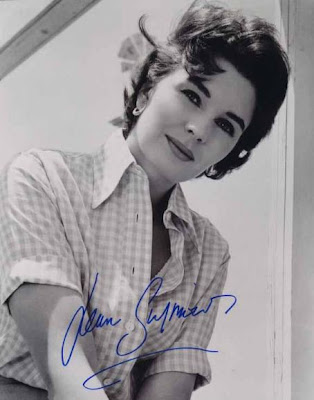 TCM's Star for the Month of June: Jean Simmons(pictured above). Performed in films made in Great Britain during and after World War II – she was one of J. Arthur Rank's young starlets.

Happy Birthday: Marilyn Monroe. (June 1, 1926 – August 5, 1962). Monroe began a career as a model, which led to a film contract in 1946. Her early film appearances were minor, but her performances in The Asphalt Jungle and All About Eve (both 1950) were well received. By 1953, Monroe had progressed to leading roles. Her "dumb blonde" persona was used to comedic effect in such films as Gentlemen Prefer Blondes (1953), How to Marry a Millionaire (1953) and The Seven Year Itch (1955).

ON TCM, June 2, 2011: It Happened Tomorrow is a 1944 fantasy film starring Dick Powell, Linda Darnell and Jack Oakie, and featuring Edgar Kennedy and Sig Ruman. It was directed by René Clair.

Happy Birthday: Hedda Hopper! (May 2, 1885 – February 1, 1966) was an American actress and gossip columnist, whose long-running feud with friend turned arch-rival Louella Parsons became at least as notorious as many of Hopper's columns.

Happy Birthday: Rosalind Russell (June 4, 1907 – November 28, 1976) was a actress of stage and screen, best known for her role as a fast-talking newspaper reporter in the Howard Hawks screwball comedy His Girl Friday, as well as the role of Mame Dennis in the film Auntie Mame. She won all 5 Golden Globes for which she was nominated, and was tied with Meryl Streep for wins until 2007 when Streep was awarded a sixth. Russell won a Tony Award in 1953 for Best Performance by an Actress in a Musical for her portrayal of Ruth in the Broadway show Wonderful Town (a musical based the film My Sister Eileen, in which she also starred.

ON TCM, June 6, 2011. Cary Grant tribute. He was known as perhaps the perfect example of the debonair leading man: handsome, virile, charismatic, and charming.