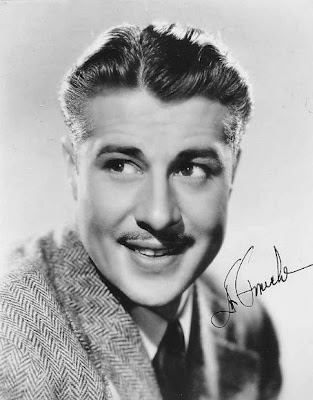 Don Ameche (May 31, 1908 – December 6, 1993). Ameche had gone to university to study law but loved theatricals so decided on a stage career. One of Ameche's brothers, Jim Ameche, was also an actor in radio and films.

He made his film debut in 1935 and performed in such films as Alexander's Ragtime Band (1938), as the title character in The Story of Alexander Graham Bell (1939). He also co-starred with Gene Tierney in the film, Heaven Can Wait, a film nominated for the Academy Award for Best Picture. 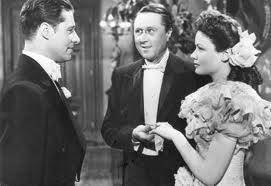 When 70 year old Henry Van Cleve, a member of New York's social elite dies, he believes that he will be sent to the devil and goes there directly. When he arrives, he is greeted by a well dressed gentleman, who's curious to know what crimes Henry has committed, that would cause him to think he belongs with the devil. Thinking the best way to remember, is by all the woman he has had in his life. So Henry begins his story:

When he was born his mother and grandmother spoiled him, and as he got older, he quickly began to notice girls. A cute scene in the film is when, Henry shows a little girl a beetle, and as she talks him into giving her another beetle, Henry realizes, "If you want to win a girl, you have to have lots of beetles."

Henry's wealthy father Randolph and his grandfather, provide Henry with everything a young man could think off, including a maid to tutor him in French. The lovely French tutor is tutoring Henry in the ways of champagne and romance, until the morning of his fifteenth birthday, when his shocked parents find their son drunk. Henry's lifestyle as a womanizer continues until the morning of his 26th birthday. Henry tells his mother that he has met the girl of his dreams and wants to marry her, if only he knew her name. That evening, Henry attends a party celebrating the engagement of his cousin Albert and his beautiful fiancee, Martha. Henry can not believe his eyes when he sees Martha, for she is the girl he fell in love with the day before during a chance meeting. Martha, tells Henry that she is only marrying Albert to get away from her parents, and admits that she is in love with Henry. The couple elope that night.

On the day before Martha and Henry's 10th anniversary, Henry is having breakfast with their son Jack when he reads a note from Martha, saying that she has left him. Henry goes to see Martha at her parents home in Kansas, where her parents have reluctantly taken her back. When he gets there, Martha tells him that she is aware of Henry's continued womanizing, but his charm and his Grandfather, convince her to forgive her husband and they get back together.

Henry and Martha are happy as the years pass, until Henry becomes worried about thier son Jack's involvement with a chorus girl named Peggy. Henry visits Peggy, who accepts his offer of $25,000 to leave Jack. Jack, has already tired of Peggy, and announces that he has a new girl friend. That evening, Martha tells Henry that she likes the look of him now that he is fifty, for his potbelly means that he is no longer a Casanova. Or so she thinks...

One of Don Ameche's favorite movie of his own films.