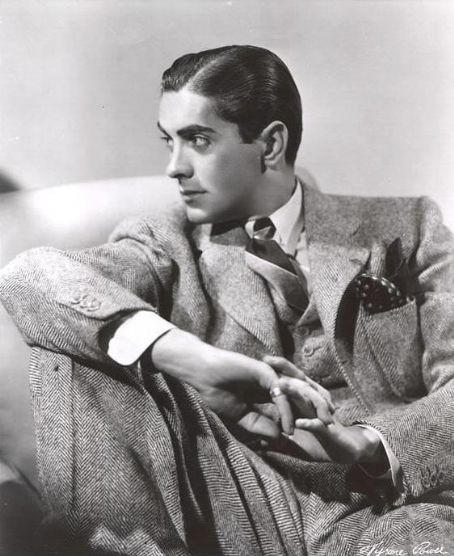 Soon after Tyrone Power Jr., found a small part in, Tom Brown of Culver(1932). A story about a young boy who thought his father was a war hero, finds out that he really was a deserter. Power's performance in that movie didn't do very well. Discouraged, he took the advice of friend, Arthur Caesar, to go to New York to get more experience as a stage actor.

He stopped in Chicago, where his friend, Don Ameche, a radio personality, convinced him to work in radio. Things did not go has he hoped and eventually went on to New York.

There, he met Katharine Cornell, a stage actress, who cast him as an understudy for Burgess Meredith, for the play, Flowers of the Forest.

This time.. Tyrone Power went to Hollywood, where he was signed by 20th Century Fox and was assigned to Sing Baby Sing, at the request of Alice Faye. The director, Sidney Lanfield, dropped him from the cast, telling him that he should find another line of work.

Faye, later did convince the studio to give him another chance. He was assigned to a small part in, Girls' Dormitory.

Next, he was cast in a slightly larger part in, Ladies in Love(1936). A romantic comedy film directed by Edward H. Griffith. Starring Janet Gaynor, Constance Bennett and Loretta Young. The film is about three roommates living in Budapest and their romantic adventures. Tyrone Power and Loretta Young made such an impact in this movie that they were quickly paired by the studio in several more films including: Love Is News (1937), Cafe Metropole (1937), Second Honeymoon (1937), and Suez (1938).

King, liked what he saw and insisted that Tyrone Power be tested for the lead role in, Lloyd's of London(1936). A Drama film which stared Tyrone Power, Madeleine Carroll, and Guy Standing. The film, Lloyd's of London proved that 23-year-old Tyrone Power could act. The story begins when Jonathan Blake and Horatio Nelson uncover a plot involving insurance fraud. Jonathan decides that instead of a reward for the information he would rather apprentice at Lloyds. He eventually becomes an influential member of the Lloyd's group. Meanwhile, Horatio Nelson starts his naval career as a midshipman and rises to the rank of, Admiral of the British Fleet. Jonathan meets a woman named, Lady Stacy. He falls in love with her even though she is married. During the war, Mr. Angerstein requests the Admiralty that the British fleet provide escort to merchant ships so that they can continue to provide insurance on cargo. Jonathan Blake realizes that this would divide Nelson's fleet and does as much as he can to prevent this from happening. 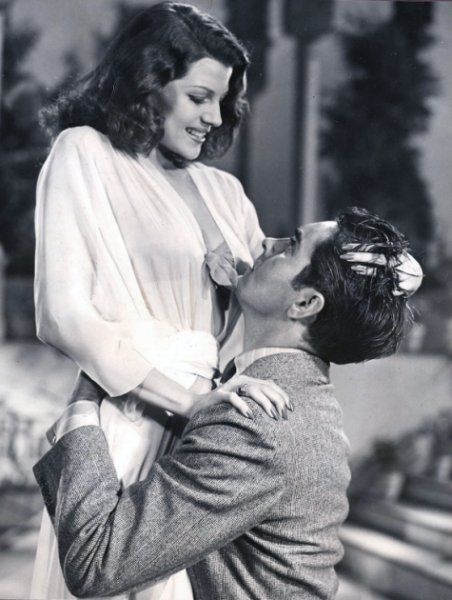 Tyrone, also starred in one of my favorite films, Blood and Sand(1941). Directed by Rouben Mamoulian and starring Tyrone Power, Linda Darnell, Rita Hayworth, and Alla Nazimova. It is based on the Spanish 1909 novel Blood and Sand by Vicente Blasco Ibáñez. There are two earlier versions of Blood and Sand; a 1922 version produced by Paramount Pictures, and starring Rudolph Valentino and a 1916 version filmed by Blasco Ibáñez himself. 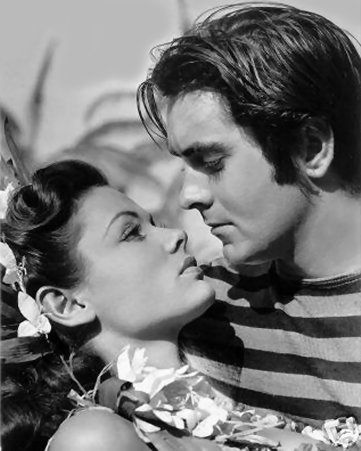 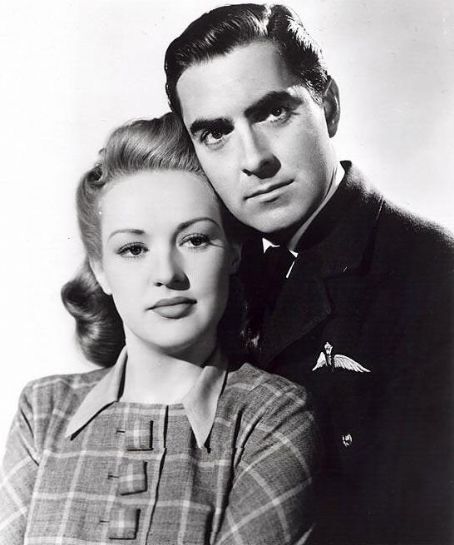 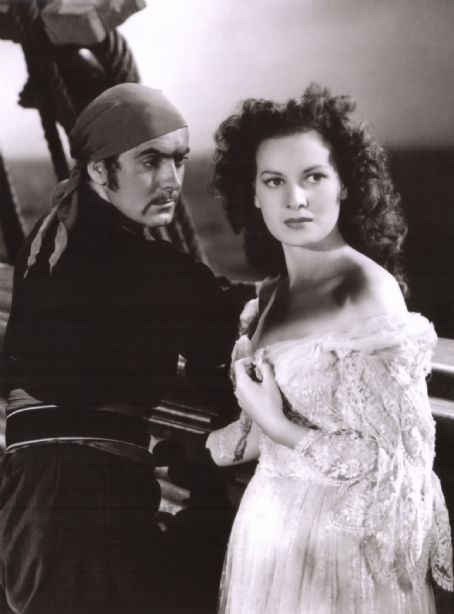 Another favorite of my Tyrone movies is, The Black Swan (1942). Swashbuckler film by Henry King, based on a novel by Rafael Sabatini, and starring Tyrone Power and Maureen O'Hara. It was nominated for three Academy Awards, and won one for Best Cinematography, Color.

The story is about how Captain Jamie Waring and his lieutenant, Tom Blue, reluctantly give up their past out of their friendship with Morgan, but Captain Billy Leech and Wogan, refuse to change. Soon, Waring is attracted to Denby's daughter, Lady Margaret, who happens to be engaged to, Roger Ingram.

She does not know, her fiancee is secretly providing information about ship sailings to the pirates. When Morgan is unable to stop his old shipmates, he is suspected of still working with them. It is up to Waring to set sail to straighten things out.

The direction of Tyrone Power's career took a dramatic turn in the movie, The Mark of Zorro. When he played the role of Don Diego Vega/Zorro, nerd by day, bandit hero by night.

The role had been made famous by Douglas Fairbanks in the 1920 movie by the same title. Power's performance was excellent, and 20th Century Fox often cast him in swashbucklers.

Power was a talented swordsman and the dueling scene in The Mark of Zorro is considered one of the finest in movie history.

Later Tyrone Power co-starred again with Gene Tierney in the film, The Razor's Edge, an adaptation of W. Somerset Maugham's novel of the same name. Power's venture into drama was short lived, as he was next seen in a costume movie, Captain from Castile, directed by Henry King, who directed Tyrone Power in eleven movies.

After making a couple of light romantic comedies, That Wonderful Urge (with Gene Tierney, his co-star from The Razor's Edge) and The Luck of the Irish (with Anne Baxter), Power found himself once again in swashbucklers – The Black Rose and Prince of Foxes.

As the 1950's Power was becoming unhappy with his performance in the films, American Guerrilla in the Philippines and Pony Soldier, so in 1950 he traveled to England to play the title role in, Mister Roberts at the London Coliseum.

But eventually he did return to films, Untamed(1955), The Long Gray Line, a John Ford film. Darryl F. Zanuck, wanted him to play the lead role in, The Sun Also Rises (1957), adapted from the Hemingway novel.

Also released that same year were, Abandon Ship and John Ford's Rising of the Moon (narrator only).

Tyrone Power's last film role turned out to be one of his most highly regarded, cast against type as the accused murderer, Leonard Vole, in the film, Witness for the Prosecution, directed by Billy Wilder. 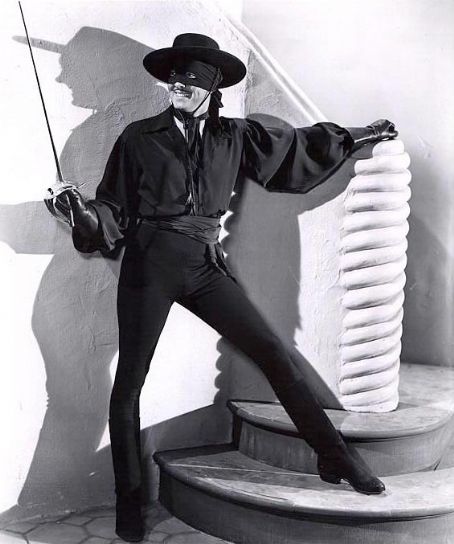