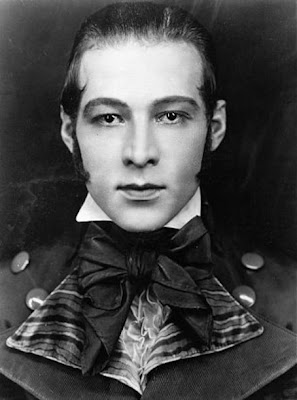 Rudolph Valentino (May 6, 1895 – August 23, 1926). His first performance was as an extra in the film, Alimony, he then went on to perform in a bit part in the silent film drama, The Eyes of Youth(1919). Directed by Albert Parker and starring Clara Kimball Young. This film is often credited for Valentino being cast in the film, The Four Horseman of the Apocalypse.

Not wanting to continue to play the "heavies" in film, Valentino returned to New York staying with friends in Greenwich Village and while in New York, he learned that June Mathis had been trying to find him to cast him in the role of Julio Desnoyers for the film, The Four Horsemen of the Apocalypse(1921). A silent movie directed by Rex Ingram and starring Rudolph Valentino, Pomeroy Cannon, Josef Swickard, Wallace Beery, and Alice Terry. It was based on the novel The Four Horsemen of the Apocalypse by Vicente Blasco Ibáñez. The film became the top grossing film of 1921 beating out Charlie Chaplin's The Kid, and going on to become the sixth best grossing silent film of all time. The film turned Rudolph Valentino into a super star and he became known as the, "Latin Lover". The film also inspired the tango craze and the gaucho pants.

Metro Pictures, refused to give him a raise beyond the $350 a week he had made for Four Horsemen and gave him a bit part in a B film called, Uncharted Seas. No negative or print material is known to exist at this time. It was on this film that Valentino met his second wife, Natacha Rambova. 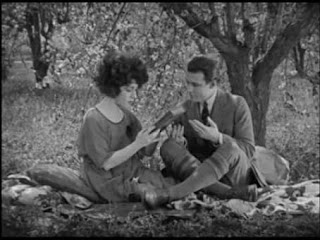 Valentino went on to perform in the silent film, Camille(1921).  It is one of numerous screen adaptations of La Dame aux Camélias by Alexandre Dumas. The original play opened in Paris in 1852. The first Broadway production of the play opened on 9 December 1853. There have been 15 Broadway revivals of the popular play, the last in 1935.

The story begins when, a law student, Armand falls in love with with a courtesan Marguerite, who entertains men, in her fancy apartment. Later, Armand sees Marguerite at the opera and attends one of her private parties to get to know her better. Things are going well.. until Armand's father, convinces Marguerite to end the relationship. She takes up with a wealthy client, leaving a note for Armand. When Armand finds the note and is heartbroken, he decides to begin dating Olympe, another courtesan. When he sees Marguerite at a casino, he publicly embarrasses her. Marguerite, gives up her life as a courtesan and finds herself alone, poor and her illness takes a heavy toll on her. The film includes many lavish Art Deco sets. Natacha Rambova, was the movie's art director.
Please click to view movie review for the Silent film Camille.

Valentino's final film for Metro was, The Conquering Power(1921). A silent film. Directed by Rex Ingram and starring Rudolph Valentino and Alice Terry. It was based on the novel Eugénie Grandet by Honoré de Balzac.The story begins After the death of his father, Charles Grandet, is taken in by his uncle, Monsieur Grandet. Even though being a wealthy man, he forces his family to live in poverty.

Charles falls in love with Grandet's daughter Eugenie but Grandet sends Charles away. While Charles is away, Grandet kills Eugenie's mother. It turns out that Eugenie is not really Monsieur Grandet's daughter after all. Eugenie, finds letters sent by Charles that her father had hidden, who after a argument accidentally locks himself in a small room where he keeps his gold and dies. Eugenie, is left a wealthy woman, which puts the pressure on her by two competing families to marry one of her suitors. Will she ever find Charles in time?

Jesse Lasky, wanted to capitalize on the popularity of Valentino and cast him in a role that would give him the reputation as the "Latin Lover". The Sheik(1921). A Silent movie directed by George Melford, starring Rudolph Valentino, Agnes Ayres and Adolphe Menjou. It was based on the bestselling romance novel, The Sheik by Edith Maude Hull.

The story begins when Sheik Ahmed, falls in love with British socialite Diana and carries her off to his tent in the desert. Diana, not to sure how she feels about about him. Until, she is kidnapped by desert bandits.. does Diana realize how much she loves Ahmed, who comes to her rescue. The film was a major success and would define not only his career but his image and legacy.

He also had a leading role in the film Moran of Lady Letty. A story about wealthy Ramon Laredo, who is abducted and put to work aboard a ship commanded by smugglers. When the ship comes across the "Lady Letty," some of the Letty's crew is brought aboard, including Letty 'Moran' Sternerson, daughter of the Letty's captain. Moran and Ramon have little use for each other, but when the smuggler Captain Kitchell turns his attentions on Moran, it is Ramon who comes to her rescue. 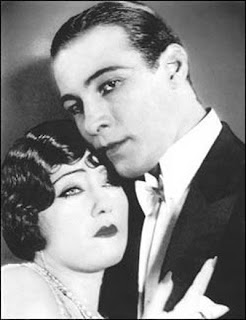 In November 1921, Valentino was set to star alongside Gloria Swanson in the Silent film, Beyond the Rocks(1922). A silent film in which Gloria Swanson and Rudolph Valentino starred together for the only time. The film was directed by Sam Wood.

The story is about a woman who plans to marry a rich older, man. Just before her marriage she meets a young nobleman. While in the Alps on her honeymoon, they meet again and later, in Paris, they meet a third time and fall in love. When the woman's husband finds out about her feelings for the nobleman and later decides to sacrifice himself  on a dangerous expedition to Arabia. His death during that expedition makes it possible for the young lovers to be together. The film had lavish sets and extravagant costumes.

Please click here to view movie review Beyond The Rocks(1922).

The story is about Juan Gallardo, a poor village boy, who grows up to become one of the greatest matadors in Spain. He marries Carmen a friend from his childhood, but after he is rich and famous he finds himself drawn to Doña Sol, a wealthy, seductive widow. They begin a love affair, but Juan, feeling guilty, tries to free himself of Doña Sol. Furious at being rejected, she exposes their affair to Carmen and Juan's mother. Juan becomes reckless in the arena. Will he live long enough to reconcile with Carmen? Blood and Sand proved very successful at the box office.

These are just a few examples of Rudolph Valentino's wonderful performances. 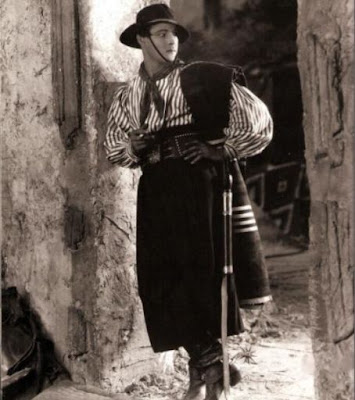 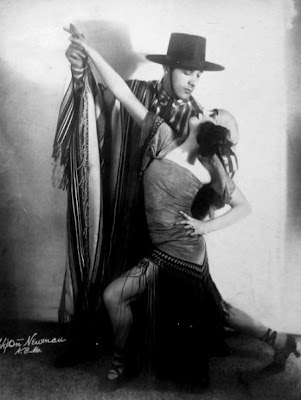 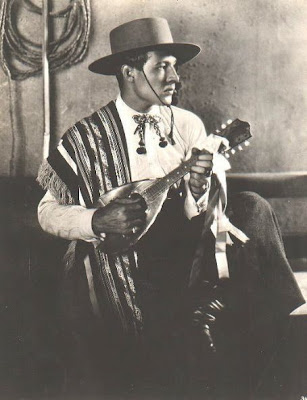