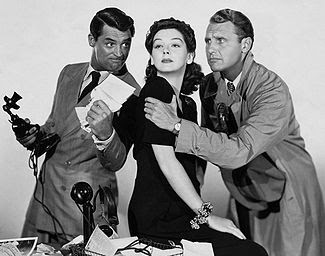 Newspaper reporter Hildy Johnson, recently divorced from newspaper editor Walter Burns, stops by his office at the Morning Post, to tell him that she is planning to marry insurance salesman, Bruce Baldwin.

When she gets there, Walter is working on a story about Earl Williams, who has just been sentenced to die for killing a policeman.

To keep Hildy from leaving, he tells her the paper needs her to cover the story. Hildy at first refuses, saying that she is tired of being a newspaperman and now wants to be a wife.

While having lunch, Walter learns that the couple are leaving with Bruce's mother, on the four o'clock train to Albany. Wanting to quickly come up with a plan to win Hildy back, Walter convinces Bruce, that only a story written by Hildy, can save Williams.

Hildy agrees to write the story if Walter will purchase a life insurance policy from Bruce. Walter agrees and when he returns to the newspaper office with Bruce for a medical examination, Hildy goes to the press room at the criminal court's building, where she is welcomed by the other reporters, who warn her that she will never be able to give up the newspaper business.

Walter does everything he can to keep Hildy from leaving. Will Walter prevent Hildy's up coming marriage and will Hildy get the big story?

This is a very charming/funny film. Cary Grant is, better than ever and I've never seen Rosalind Russel in a role that suited her more perfectly. The supporting actors, are all perfect for this film.

Ginger Rogers wrote that she was offered the role of Hildy Johnson. She read the script, but this was before Cary Grant was cast, and she turned it down. After learning that Grant was cast, she regretted it. 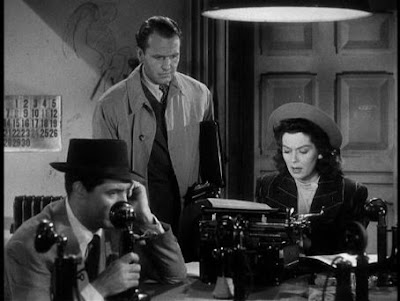 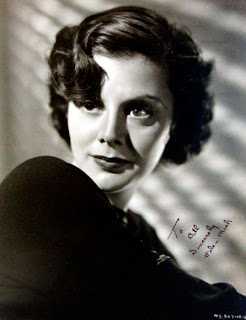 She performed on Broadway, in vaudeville (1926–28) and in silent films.

Mack debuted on stage in, The Idle Inn with Jacob Benami. She performed with Roland Young in The Idle Inn and toured America (1928–29) with William Hodge in Straight Through The Door.

Her Fox Film screen test was March 1931 and within three weeks she was on the studio lot. Mack began her film career, first billed as Helen Macks, in Success. The motion picture featured Brandon Tynan, Naomi Childers, and Mary Astor.

She made her debut as a leading lady opposite Victor McLaglen in, While Paris Sleeps (1932) and was cast with John Boles in his initial Fox Film venture, Scotch Valley.

Mack played in several westerns in the early 1930's:  Fargo Express (1933) with Ken Maynard and The California Trail with Buck Jones.

RKO Radio Pictures Inc. offered her a second chance as Mamie Donahue in Sweepings. She may be best remembered for the 1933 movie sequel The Son of Kong, as Harold Lloyd's sister in The Milky Way (1936) and as the suicidal Molly Malloy in His Girl Friday (1940).

She also played an important role as Tanya in Merian C. Cooper's production of H. Rider Haggard's She (1935) opposite Randolph Scott, Nigel Bruce, and Helen Gahagan (who did the title role as She, who must be obeyed).

Other roles for Mack included the bank-robbing ingenue opposite Richard Cromwell and Lionel Atwill in 1937's The Wrong Road.

In the 1940's and 1950's, Mack worked as a producer and director of radio programs: Richard Diamond, Private Detective and The Saint.

As TV succeeded radio as the prevalent entertainment medium, she continued to write plays and TV episodes until her death.

In 1949, she collaborated with Roger Price in writing the children's record Gossamer Wump, narrated by Frank Morgan and released by Capitol Records.

Mack married lawyer Charles Irwin in San Francisco, California, in February 1935 at age 21. Irwin was a bankruptcy trustee for Fox Film West Coast Theaters. By this time Mack was under contract to Paramount Pictures. They had a son in 1936 and divorced in 1938.

In 1940 she married Thomas McAvity in Santa Barbara, California. McAvity later became Vice President in Charge of Television Network for NBC. They had one son. 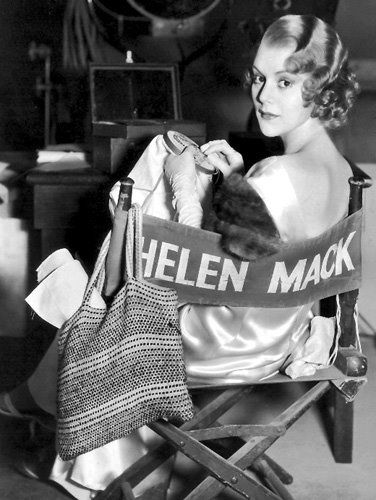