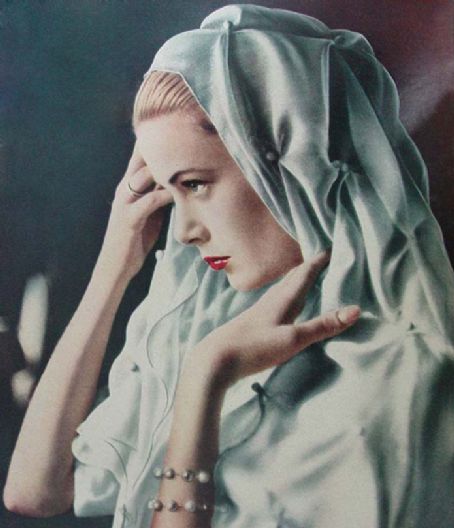 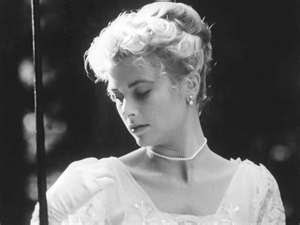 The Swan( 1956). Remake of a 1925 film (also remade in 1930 as One Romantic Night). The film is a romantic comedy directed by Charles Vidor, produced by Dore Schary from a screenplay by John Dighton based on the play by Ferenc Molnár. Costume design by Helen Rose. Cast: Grace Kelly, Alec Guinness and Louis Jourdan with Agnes Moorehead, Jessie Royce Landis, Brian Aherne, Leo G. Carroll, Estelle Winwood and Robert Coote.

This was the second time in two years that Jessie Royce Landis played Grace Kelly's mother. The first was in To Catch a Thief (1955). These were the only two films in which both actresses performed together. Beautifully filmed and Grace Kelly, was excellent in this role. 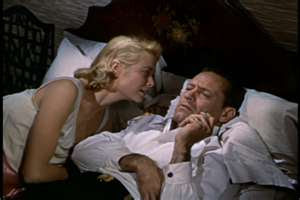 The Bridges at Toko-Ri (1954). film based on a novel by James Michener about a naval aviator assigned to bomb a group of heavily defended bridges during the Korean War. It was made into a movie and won the Special Effects Oscar at the 28th Academy Awards. The novel and film are a composite of actual missions flown against bridges at Majon-ni and Changnim-Ni, North Korea, in the winter of 1951–1952, when Michener was a correspondent aboard the aircraft carriers Essex and Valley Forge, and with a pair of rescue missions on February 8, 1952, one of which involved the shoot-down of a plane off the Valley Forge. However, in the rescue incident referenced the downed airmen survived the crash and rescue attempt but were captured by North Korean soldiers. For realistic close-up shots, William Holden learned how to taxi a fighter on the deck of an aircraft carrier.

Some movie viewers believe that Grace Kelly was wasted in her small part in this film. Although, it is very close to the her role she played as housewife and mother in the film, The Country Girl, where she won her Oscar. She has a memorable scene with her husband's commander Admiral Fredric March, when her husband goes off to help his men. 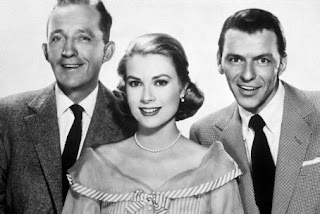 High Society(1956). Is a musical film with music and lyrics by Cole Porter. It was directed by Charles Walters and produced by Sol C. Siegel from a screenplay by John Patrick, based on the play The Philadelphia Story by Philip Barry. The cinematography was by Paul Vogel, the art direction by Cedric Gibbons and Hans Peters and the costume design by Helen Rose. It is notable for being the last film performance of Grace Kelly, before she became Princess consort of Monaco. Elizabeth Taylor was the first choice for the part of Tracy Lord. She was unavailable so the part went to Grace Kelly.

Even though Grace Kelly, is the central character in this musical film, she does not sing, but joins Bing Crosby, for the song "True Love" and drunkenly shouting, "Sensational,". 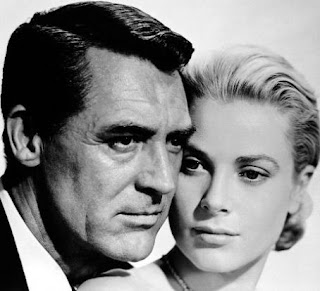 To Catch a Thief(1955). Romantic/Thriller directed by Alfred Hitchcock. Cast: Gary Grant, Grace Kelly. The movie is set on the French Riviera. On 14 September 1982, Grace Kelly was killed in an automobile accident in Monaco, supposedly on the very same road as her famous chase scene in this film and not far from where she had a picnic scene with Cary Grant. She was 52 years old and lost control of her car after suffering a stroke while at the wheel.

Grace Kelly, was absolutely elegant and at the height of her beauty in this film. Kelly, was dressed by the very talented Edith Head.

The Country Girl (1954). Drama film adapted by George Seaton from a Clifford Odets play of the same name, which tells the story of an alcoholic has-been actor struggling with the one last chance he's been given to save his career. Cast: Bing Crosby, Grace Kelly and William Holden. Kelly, won the Oscar for Best Actress for her role. Jennifer Jones was considered for, but turned down, the female lead which later won Grace Kelly her Oscar. It seems every time a beautiful woman makes herself look plain, she wins an Oscar.

During auditions for a new musical production, the director, Bernie Dodd, watches fading star Frank Elgin, perform his number and suggests he be cast. Cook, the shows producer has strong oppositions.

Elgin, is living in a small apartment with his wife Georgie, a bitter woman who has aged far beyond her years, are not sure Elgin can handle the part.

Bernie believes that Georgie is the reason for Frank's problems and he criticizes her, to her face. He doesn't know Elgin's career ended with the death of their five-year-old son, who was hit by a car while he was in the care.

Bernie, realizes that behind his hatred of Georgie, there is a strong attraction to her. He kisses her and they fall in love.

Elgin, is wonderful in the role on opening night. Bernie, believes now that Elgin has recovered his self-respect, Georgie will be free to leave him, but will she? 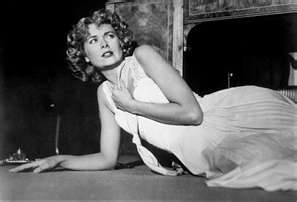 Dial M For Murder (1954). Thriller film based from a stage play and directed by Alfred Hitchcock . It stars Ray Milland as a retired tennis pro who wishes to have his wife killed, Grace Kelly as the wife, and Robert Cummings as her lover. The supporting cast includes: John Williams as the police detective who investigates the matter and Anthony Dawson as the man hired to do the killing.

Grace Kelly was 25-years-old and full of confidence as an actress and she certainly proved it here. 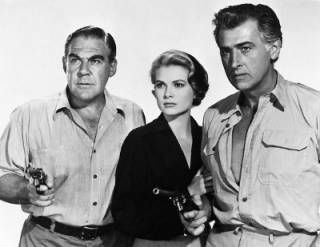 Green Fire(1954). Directed by Andrew Marton and produced by Armand Deutsch, with original music by Miklós Rózsa.C ast: Grace Kelly, Stewart Granger, Paul Douglas and John Ericson. The story is about a Rugged mining engineer Rian Mitchell, who discovers a lost emerald mine in the highlands of Colombia, which had last been operated by the Spanish conquistadors. Rian is a man consumed by the quest for wealth. The mining and plantation scenes were shot on location in rural Colombia. The cast and crew lived many weeks of miserable weather to give the film its realistic look.

Kelly, seemed a bit out of place, living in the south American jungle. Although, this adventure story had enough action and excitement, to keep your interest until the end. 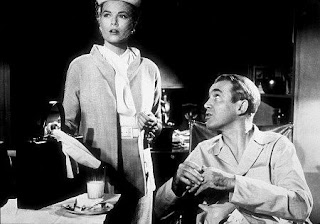 Rear Window (1954). Suspense film directed by Alfred Hitchcock, written by John Michael Hayes and based on Cornell Woolrich's 1942 short story "It Had to Be Murder". Cast: James Stewart as a photographer who spies on his neighbors while recuperating from a broken leg; Grace Kelly as his girlfriend; Thelma Ritter as his nurse; Wendell Corey as a police detective; and Raymond Burr as one of the neighbors. The film is considered by many to be one of Hitchcock's best. It received four Academy Award nominations. The love affair between war photographer Robert Capa and actress Ingrid Bergman was believed to be Alfred Hitchcock's inspiration for the film.

Grace Kelly's character, started out struggling with her relationship with L.B., because he has doubts about marrying her, but.. she loves him so much that she will to do anything for him, including going into danger to win his heart. 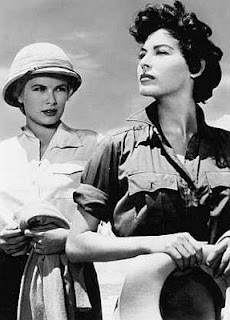 Mogambo(1953) film directed by John Ford. Cast: Clark Gable, Ava Gardner, Grace Kelly and Donald Sinden. The film was adapted by John Lee Mahin from the play by Wilson Collison. Kelly won a Golden Globe for Best Supporting Actress (1954), and the film was nominated for two Oscars, Best Actress in a Leading Role (Gardner), and Best Actress in a Supporting Role (Kelly). Mogambo is a remake of the classic film Red Dust (1932). The earlier movie also featured Gable in the lead role. Personal quote: Mogambo (1953) had three things that interested me. John Ford, Clark Gable, and a trip to Africa with expenses paid. If Mogambo had been made in Arizona, I wouldn't have done it. 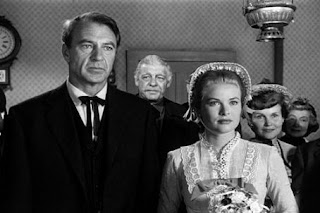 High Noon(1952). Western film directed by Fred Zinnemann. Cast:Gary Cooper and Grace Kelly. The film tells in real time the story of a town marshal forced to face a gang of killers by himself. The screenplay was written by Carl Foreman. Grace Kelly was cast after Stanley Kramer saw her in an off-Broadway play. He arranged a meeting with her and signed her on the spot.

Even though Grace Kelly plays a beautiful bride, it is hard to like her character .. until the very end. 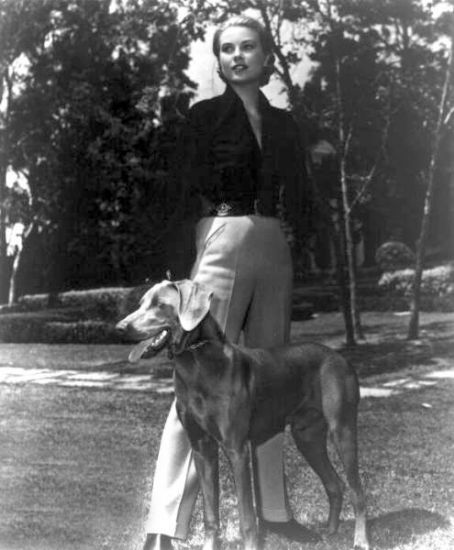