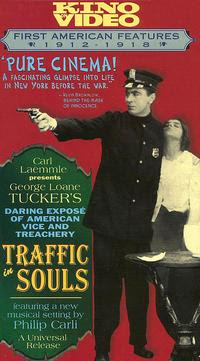 “Traffic in Souls” (1913) is a silent drama starring Jane Gail, Ethel Grandin, and Matt Moore. Directed by George Loane Tucker, this film is about a woman who wants to uncover the prostitution ring that has kidnapped her sister. The story begins with Mary Barton, played by Jane Gail, and her sister, Lorna, played by Ethel Grandin, working at “Smyrner’s Candy Store” in New York City. One day, Lorna agrees to go on a date with a handsome, young customer, not realizing that he is part of a white slavery ring. He drugs and kidnaps her intending to force her into prostitution. Mary, desperate to find her sister, teams up with her policeman fiancé, Officer Larry Burke, played by Matt Moore, who recently busted a bunch of white slavers who were preying on innocent immigrants at Ellis Island. Feeling that Lorna’s kidnapping brings disgrace to the store, Mary is fired by her boss. Mrs. Trubus, played by Millie Liston, a rich patron who likes Mary, refers her to a secretarial position in her husband’s office. While working in the office of William Trubus, played by William Welsh, Mary discovers that this rich philanthropist is actually the head of the prostitution ring that has kidnapped her sister. At this point, Mary enlists the help of her invalid inventor father, Isaac, played by William H. Turner, who provides a device that will copy dictagraph conversations to phonograph. Trubus’ conversations are recorded as evidence, and the police march out for the bust. 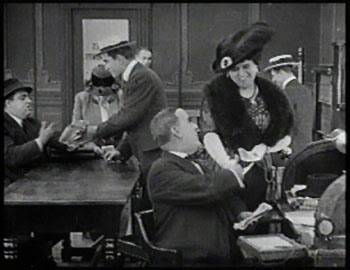 “Traffic in Souls” (1913) is a milestone in filmmaking. It’s not only a relatively early American produced feature length film, but it is also one of the first American urban thrillers that paved the way for the kind of action films Hollywood would soon become noted for making. Even though the editing is choppy in some places, “Traffic in Souls” offers one of the earliest examples of crosscutting. I noticed that there is not much camera movement throughout the film except for the exterior scenes of New York City at the docks and on the rooftop. The interior sets have a Victorian look to them with their wallpaper and ornaments. Although “Traffic in Souls” is quite primitive, it still held my interest. I think what impressed me the most about this film was its preoccupation with technology like the dictagraph and phonograph as well as modern means of transportation like streetcars, buses, railways and steamships. A huge box office success, this controversial film grossed half a million dollars. Today, “Traffic in Souls” is a curiosity piece that deserves to be seen.

Ethel Grandin was born in New York City on March 3, 1894. At her mother’s urging, Ethel had gone on stage in 1900 at the age of six. She appeared with Joseph Jefferson in “Rip Van Winkle” and toured with Chauncey Olcott, along with Lottie Pickford, Mary’s sister. Mrs. Charlotte Pickford kept an eye on the young actress and probably urged her to enter films. In 1910, with her mother, Ethel went down to the American Biograph studio on East 14th Street in New York City and was interviewed by D.W. Griffith. The director pulled up Ethel’s dress and inspected her legs. When Ethel began to pout and sulk, Griffith explained to her that he wanted to make sure she did not have bowlegs, as did so many of the actresses there. Despite knowing this to be true, Ethel was so outraged by Griffith’s behavior that she refused to return to the studio the next day. Instead, Ethel and her mother went to Carl Laemmle’s IMP Company. She was seen by Thomas H. Ince, who had just returned from directing Mary Pickford in Cuba, and was signed to a contract. Mary Pickford was about to leave the company, and Ince saw something of a similarity between Ethel and Mary Pickford, although she lacked the latter’s personality. Coincidentally, Ethel played Mary Pickford’s sister in IMP’s “The Toss of the Corn” (1911). When Ince decided to enter independent production with the New York Motion Picture Company, he invited Ethel to come to California with him as his leading lady. Also in the group was cinematographer Ray Smallwood, who would later become a director and whom Ethel married in 1912. In 1913, Carl Laemmle asked Ethel to return to his company along with Ray Smallwood. She was the company’s leading star billed as “The Imp of the IMP Company.” For Laemmle, Ethel starred in both Western and comedy shorts. Ethel also starred along with Matt Moore and Jane Gail in George Loane Tucker’s 1913 production of “Traffic in Souls,” produced in semi-secrecy without Laemmle’s approval. “Traf 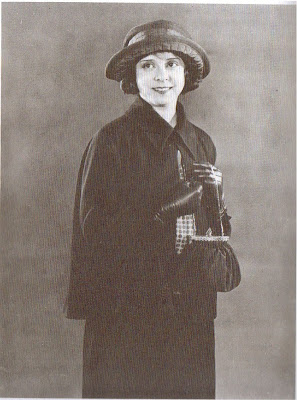 fic in Souls” is important as one of the American film industry’s first feature-length productions for its semi-documentary quality with exteriors on the streets of New York City, and for an innovative, panoramic shot. It was also the film that launched Universal Pictures Studios. In 1915, Ethel retired from the screen in order to take care of her infant son. When Ray Smallwood was hired by Metro to head its camera department, Ethel came with him back to Los Angeles. Smallwood turned to direction in the early 1920’s, and Ethel returned briefly to the screen in two 1921 films with Gareth Hughes and a Charles Ray feature from 1922. The diminutive and charming Ethel Grandin died at the age of 94 on September 27, 1988.
Posted by Dawn at 3:51 AM