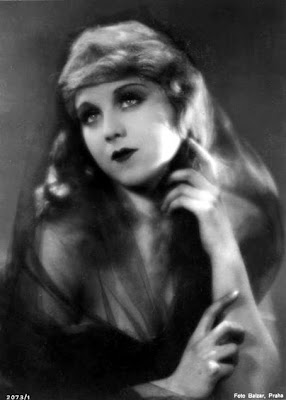 This weeks (Updated October 21st) Chick Flicks at the Movies: Blackmail(1929). Click picture on side bar to view movie. A Scotland Yard inspector deals with a blackmailer who knows his fiancee killed an artist. Cast: Anny Ondra(pictured above), John Longden, and Cyril Ritchard

ON TCM:  October 23, 2010. To Have And Have Not (1944). A skipper-for-hire's romance with a beautiful drifter is complicated by his growing involvement with the French resistance. Cast: Humphrey Bogart, Lauren Bacall, Walter Brennan. Dir: Howard Hawks.

On TCM: October 24, 2010. Tea for Two (1950). Click picture on side bar to read review. Tea for Two is a 1950 American musical film directed by David Butler. The screenplay by Harry Clork and William Jacobs was inspired by the 1925 stage musical No, No Nanette, although the plot was changed considerably from the original book by Otto Harbach and Frank Mandel, and the score by Harbach, Irving Caesar, and Vincent Youmans was augmented with tunes by other composers.

ON TCM: October 25, 2010. Summertime (1955).Click picture on side bar to read review. The story focuses on Jane Hudson (Katharine Hepburn), a single, middle-aged secretary from Akron, Ohio. She is on her summer vacation and is now enjoying her lifelong dream of a vacation in Venice after saving up money for the past few years for the big trip.

ON TCM: October 27, 2010. Lucky partners(1940). Ronald Colman shares a sweepstakes ticket with Ginger Rogers and they then go on an "imaginary" honeymoon with their "winnings."


ON TCM: October 29, 2010. I Walked with a Zombie(1943). As was typical of many of Lewton's horror films, he was given the film's title and, with the aid of credited writers, he created the story around the title, in this case borrowing elements of Charlotte Bronte's,  Jane Eyre. Also typical of many Lewton films, the supernatural is treated ambiguously, and it's never entirely clear how some events should be interpreted.

Just for fun, there is a new feature on the sidebar. A list of: Noir and Chick Flicks All time popular posts. There is also a choice for month or week top picks..If you have a preference to which one, please let me know.