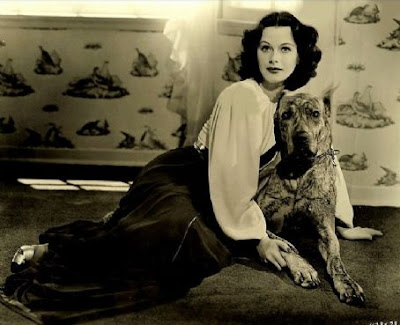 This weeks (Updated October 13th ). Chick Flicks at the Movies: Alfred Hitchcock Presents, A Man With A Problem. A man stands on the ledge of a hotel while police try to talk to him. Click picture located on the side bar to view movie.

On TCM : October 19, 2010. Rosalind Russell tribute. Rosalind Russell was best known for playing character roles, exceptionally wealthy, dignified ladylike women. She had a career span from the 1930s to the 1970s.

ON TCM: Thursday, October 21, 2010. Hedy Lamarr (pictured above)Tribute. Best known for her film career as a major contract star of MGM's "Golden Age", she also co-invented an early technique for spread spectrum communications, a key to many forms of wireless communication. Click on picture located on the side bar to view featured movies.

Monty and I have started a new series here on N and CF called: Pawsome Pet pictures. Every Wednesday we plan on showcasing a classic celebrity with one of their favorite furry friends. (sneak peek pictured above).

Lady With A Past (1932). A good girl raises her popularity when she pretends to be bad. Cast: Constance Bennett, Ben Lyon, David Manners. Dir: Edward H. Griffith.

Unsuspected, The (1947) The producer of a radio crime series commits the perfect crime, then has to put the case on the air. Cast: Claude Rains, Joan Caulfield, Constance Bennett. Dir: Michael Curtiz.

Also.. Monty and I have some pretty scary Halloween trick or treat movie reviews planned for you.. :)

Have a great week at the movies .