October on Noir and Chick Flicks: 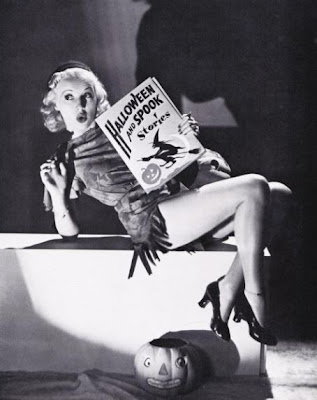 This month I'm planning on having a Halloween Theme on Noir and Chick Flicks . I have not seen too many Horror Films to write movie reviews about.. But.. I hope to see a couple of them this month, in keeping with the Halloween spirit ...(Betty Grable pictured above.)

TCM on Tuesdays, Oct: Star of the Month: Fredric March, received an Oscar nomination for, The Royal Family of Broadway(1930), in which he played a role based on John Barrymore. He won the Academy Award for Best Actor for, Dr. Jekyll and Mr. Hyde(1932), leading to a series of classic films based on stage hits and classic novels like Design for Living (1933), Death Takes a Holiday (1934), Les Misérables (1935), Anthony Adverse (1936), and as the original Norman Maine in, A Star is Born (1937), for which he received his third Oscar nomination. Click picture on side bar to view this months featured films.

ON TCM: Saturday, October 2, 2010.
Lovers on the Run, Featured Films:
Bonnie and Clyde
Badlands
Gun Crazy (please click on the Gun Crazy tag located at the bottom of this article to read review.
They Live By Night
Boxcar Bertha

I'm going to continue the Alfred Hitchcock presents series for, This weeks Chick Flicks at the Movies.

Have a great week at the movies!
Posted by Dawn at 3:33 AM