“Hoodoo Ann” (1916) is a silent drama starring Mae Marsh, Robert Harron, and William H. Brown. Directed by Lloyd Ingraham and written by D.W. Griffith, this film is about an orphan girl that is shunned by the other children in the orphanage because they believe she brings bad luck. The story begins with Ann, played by Mae Marsh, being dropped off at an orphanage as an infant. Ann was born on Friday the thirteenth and is considered to be jinxed. As a result, no one at the orphanage likes her. The matrons who run the orphanage work Ann like a slave while the other boys and girls play outside. At night when the girls are tucked in, everyone gets a good night kiss except Ann. Her only friend is the black cook, Black Cindy, played by Madame Sul-Te-Wan, who reads Ann’s palm one evening and tells her that she will be jinxed all her life until she gets married. One day Ann borrows a doll which belongs to Goldie, played by Mildred Harris, one of the favorites of the orphanage. The doll’s leg breaks and Ann feels she can’t return it. This seems to trigger some bad luck in the form of a fire in the orphanage which is actually caused by stepping on matches. When the orphanage burns down, Ann becomes a heroine for saving Goldie. At this point, the orphans are sent to different families until a more permanent home can be found for them. Mr. and Mrs. Knapp, played by Wilbur Higby and Loyola O’Connor, the couple that Ann is staying with, likes her so much they decide to adopt her. Time passes and Ann grows to be a fine young woman. She has her heart set on the boy next door, Jimmie Vance, played by Robert Harron, and he likes her, but her bad luck kicks again. After seeing a movie with Jimmie where a woman saves her man shooting the bad guys, Ann decides she wants to be a movie star. She even dresses up like the actor and acts out scenes from the movie. Unfortunately, Ann has the bad judgment of using a real gun which goes off and shoots into a neighbor’s house. Ann takes a look and sees a man lying on the floor and she is sure she has killed him. 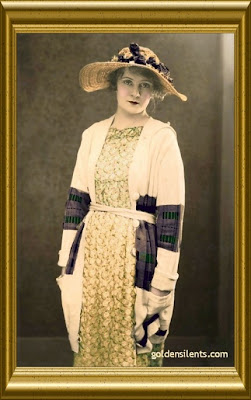 “Hoodoo Ann” (1916) is certainly not one of the best silent films I have watched. I have to admit I found the plot rather absurd. However, even with its shortcomings, this early feature-length film is quite entertaining and has excellent production values. The fire scene is quite spectacular for its time. I was impressed with the way this film combined pathos, romance, comedy and mystery. The romantic scenes with Robert Harron and Mae Marsh are very charming. One of my favorite scenes is when Robert Harron and Mae Marsh go to the movies where they see a clever spoof of contemporary William S. Hart westerns. The main reason for watching “Hoodoo Ann” is Mae Marsh, a truly talented actress that had a gift for comedy as well as drama.

Unglamorous and self-effacing, Mae Marsh has unjustly been neglected by all but the most knowledgeable of silent film fans. Yet her talent was truly remarkable. Mae made her debut as a Mack Sennett bathing beauty. She was an extra in a film or two before her first acting role in “Lena and the Geese” (1912) with Mary Pickford at D.W. Griffith’s Biograph Company. Mae spent 1912 working for directors Griffith and Thomas H. Ince and with the Kalem Company, before heading east to appear in Biograph’s New York films. Beginning in 1914, Mae worked exclusively with Griffith. In the four-reel “Judith of Bethulia” (1914), she was a peasant girl in love with Robert Harron. “The Birth of a Nation” (1915) presented Mae as The Little Sister of the film’s hero. Her moving portrayal, especially the wrenching death scene after plunging to the bottom of a mountain peak, firmly set her face and name into the minds of movie goers. She starred in many films in the wake of the success of “The Birth of a Nation” (1915), including the historic “Intolerance” (1916) where she stands out for her touching performance of the girl of the modern story. Mae made another six films for Griffith’s then current studio, Triangle, in 1916, though none were directed by Griffith. “Hoodoo Ann” (1916), which made more money than “Intolerance” (1916), was her most successful film from Triangle. It was at the end of 1916 that Mae was signed by the brand-new Goldwyn company, formed by Samuel Goldfish and Edgar Selwyn. Mae Marsh, Mabel Normand, and Madge Kennedy were featured as the jewels in the studio’s crown. Unfortunately, only two of the thirteen films Mae starred for Goldwyn were good. Even after Goldwyn took over her publicity, Mae never became a star. She was shy and soft spoken, more interested in her family and knitting than in discussing acting or looking glamorous for photographers. Mae freelanced for three years, appearing in five films, none of which did anything to re-establish her. Griffith came again to Mae’s rescue, offering her a role in “The White Rose” (1923). The film was a huge success and helped put Mae back on top. After starring in “The Rat” (1925), Mae retired, but she returned to acting as a poor old scrubwoman in 20th Century-Fox’s “Over the Hill” (1932). Mae was only thirty-seven, but looked twenty years older, with the help of makeup and lighting. Director John Ford gave Mae a role in “Drums Along the Mohawk” (1939) and continued to cast her in his films over the years. Mae never accepted any major role because she had a problem remembering lines. Mae was one of the busiest and most effective character actresses of the 1940’s and 1950’s. She can be briefly glimpsed in such films as “Young People” (1940), “A Tree Grows in Brooklyn” (1945), “The Snake Pit” (1948), “The Robe” (1953), “While the City Sleeps” (1955), and “Girls in Prison” (1956). Mae Marsh, the ex-sweetheart of the early Griffith’s films, wasn’t a glamour girl and didn’t have any theater background, but she was able to convey emotions brilliantly. Mae Marsh was certainly one of 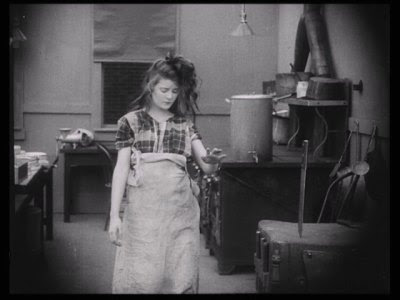 Posted by Silentfilmfanatic at 6:00 PM