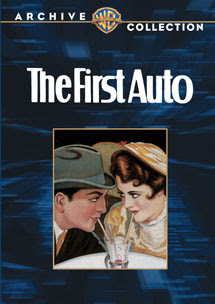 “The First Auto” (1927) is a silent drama starring Russell Simpson, Charles Emmett Mack, and Patsy Ruth Miller. Directed by Roy Del Ruth and set in rural America, this film is about the introduction of the horseless carriage into American society.The story begins with horse loving gentleman, Hank Armstrong, played by Russell Simpson, racing his mare, Sloe Eyes, in the 1895 Logan County Fair in Maple City, Michigan. Hank wins first prize and celebrates by bringing Sloe Eyes to the local tavern. However, Hank is upset that his son, Bob, played by Charles Emmett Mack, is not present to celebrate his triumph. Instead, Bob parties in the city with pretty Rose Robbins, played by Patsy Ruth Miller. Bob is a member of the horseless carriage generation and is fascinated with the newly developing automobiles. When Sloe Eyes dies of a stroke, Hank nurtures her foal as if she were his own child. When the automobile takes control of the streets, Hank’s livery business dwindles and dies. He is forced to sell his little thoroughbred, Sloe Eyes’ colt. With business and friends gone, Hank slips into madness and despair. Unfortunately, an opportunity to reconcile with his son meets with tragedy. 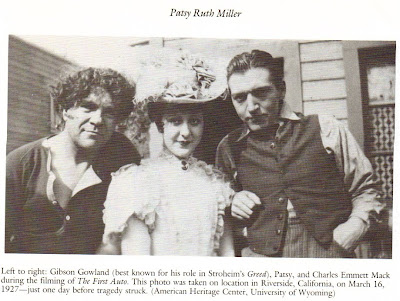 “The First Auto” (1927) is a charming film that came out the same year as “The Jazz Singer.” It uses some early sound techniques like crowd noises, laughter and one word dialogue. Even though it’s a drama, there is much comic relief provided by William Demarest who plays some old vaudeville routines and Barney Oldfield, a major name in early automobiles who races around the horse track. Russell Simpson gives a touching portrayal of an elderly man who is not able to adjust to the coming of the automobiles. Patsy Ruth Miller is excellent as Charles Emmett Mack’s love interest and looks adorable in her turn of the century costumes. Gibson Gowland, who is best known for his role in Erich Von Stroheim's "Greed" (1924) has a small part in the film. One of my favorite scenes in the film is when Charles Emmett Mack’s character sends Patsy Ruth Miller’s character a photo in which he appears with Barney Oldfield and Henry Ford in Detroit, Michigan. It is interesting to note that Charles Emmett Mack, who played Bob Armstrong, was killed in a real life automobile accident at the age of twenty-seven during the time the film was being made. His absence makes the ending seem incomplete. With its early automobile scenes and sound effects, “The First Auto” (1927) is certainly a fascinating silent film. 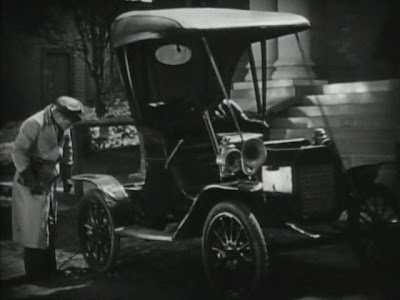 Patsy Ruth Miller was ranked as Warner Brothers’ top feminine star from 1925 to 1927. Stage-struck from childhood, she had her first experience in show business appearing in plays in the convent where she was educated. When she was sixteen, a vacation trip to California with her parents led her to her first break in films. At a social function in Hollywood, she attracted the attention of Alla Nazimova, the celebrated Russian actress, who was so impressed with Patsy that she gave her a small part in the Nazimova-Valentino version of “Camille” (1921). From then on, Patsy set her mind on a film career, quickly advancing from bits to leads. In 1922, she was chosen as a Wampas Baby Star, and in 1923 won plaudits for her portrayal of Esmeralda opposite Lon Chaney in Universal’s spectacular production of Victor Hugo’s “The Hunchback of Notre Dame.” Patsy was soon in demand for a variety of parts, distinguishing herself in a number of dramas. Among them were “Hell Bent for Heaven” (1926), “Broken Hearts of Hollywood” (1926), and “The First Auto” (1927). However, it was her work in comedies that brought her the most kudos from both critics and fans. An excellent foil for male comics, Patsy was often teamed. There was Monte Blue at Warner Brothers, Glenn Tryon at Universal, and at the beginning of sound, Edward Everett Horton back at Warners. Two of Patsy’s most outstanding performances in comedies came in 1926 at Warner Brothers. With Clive Brook as her leading man and up-and-coming Myrna Loy in support, Patsy played an aspiring actress in “Why Girls Go Back Home.” In Ernst Lubitsch’s highly acclaimed, 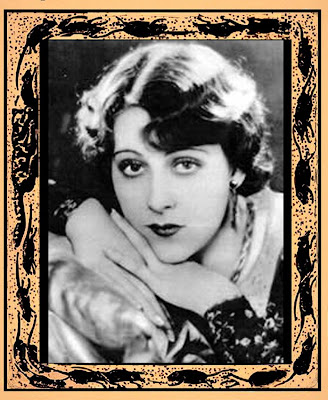 sophisticated comedy “So This Is Paris,” she co-starred with Monte Blue. Lubitsch’s most popular American film in the silent era, the story revolved around two couples whose flirtations between opposite partners led to a marital mix-up. Although she
was committed to her career, Patsy always found time for other activities. She was one of the first actresses of the twenties to pilot an airplane and travelled all over the world on several occasions. Patsy successfully weathered the transition to sound, but withdrew from the screen in 1931. Patsy then began concentrating on her writing. Her stories were published in magazines such as “Vanity Fair” and two were included in the anthology “The Best Short Stories of 1935.” After her marriage to MGM screenwriter John Lee Mahin, she wrote “That Flannigan Girl,” a novel about Hollywood published in 1939 which received good reviews.
Posted by Silentfilmfanatic at 6:47 AM