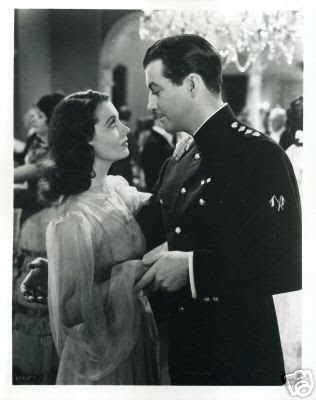 Vivien Leigh is the featured star on TCM this month. And every Tuesday they will be playing some of her movies. Well, I just watched a film of hers that I had never seen before called Waterloo Bridge and it is an excellent film. Waterloo was the first film Ms. Leigh made after the hugely successful Gone With The Wind. And most people were wondering how could she ever follow-up her performance as Scarlett O'Hara from that film. I mean Scarlett O'Hara is one of the most known characters in the world and Leigh was phenomenal. How could she do anything that would come close to matching that amazing performance. Well, just behold her in Waterloo Bridge as English ballet dancer Myra Lester and she is simply wonderful. Set in England during World War 1, Myra is part of a ballet company that is run by the tyrannical Madame Olga, who is so strict on her girls, that you think they were training for combat. Anyway one fateful night Myra meets Captain Roy Cronin (the always charming Robert Taylor and it's love at first sight. They meet on the Waterloo Bridge. 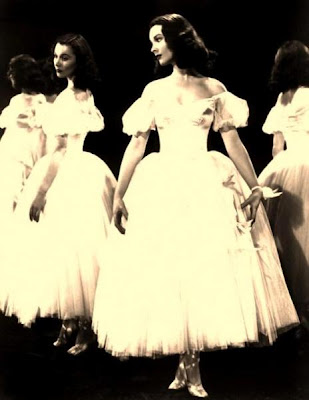 After a whirlwind romance Roy is called to the front line right before he and Myra are to be married. Once that happens Madame Olga kicks Myra from the ballet company for missing a performance. Myra's best friend Kitty (a sassy Virgina Field) sticks up for her and gets lets go as well. So these two young women are now broke and jobless trying to survive. What makes matters worse, Myra reads the newspaper one day and thinks Roy was killed in combat. Of course it's not true, but she thinks it is. Actually he's been captured by the Germans. So Myra ends up joining her friend Kitty as a street-walker/ prostitute. Myra believing she has lost the love of her life just drifts and drifts, not caring about relationships anymore. Then one fateful day at Waterloo Station, Myra is there looking to pick out a returning soldier, when Roy comes home and both are shocked to see one another. It's been over a year since they last saw each other. They quickly embrace and plan to get married once again. Of course Roy wants Myra to meet his family in Scotland and Myra accepts and goes with him. But she is torn as to when to tell Roy about her dark past. She eventually confides to Roy's mother, Lady Margaret (a terrific Lucile Watson) and leaves Roy the next morning saying she can't marry him. 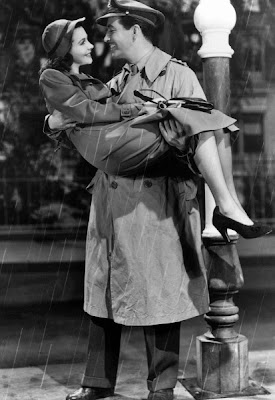 Racing home to London, Roy is frantic to find Myra and goes to find Kitty who finally tells him the secret life she and Myra have been leading. He is shocked but still wants to find her. They scour the whole city and can't find her. Myra is actually at the Waterloo Bridge, sad and lonely, wishing things had went another way. I won't ruin the ending for those who have never seen this film, but let's just say it's very emotional. I thought Vivien Leigh was magnificent as Myra. Her performance is more subdued than her Scarlett role, but it is just as good and award worthy. She goes from happy to confused to sad to quirky to dramatic, all in one film with such ease. I would have easily given her another Best Actress award for her performance here. She is just amazing to watch and I now see more than just as Scarlett O'Hara. And she just looks so beautiful. The scene where she is standing by the church doors waiting on Roy and the pastor is worth the price of admission alone. She looks directly at the camera and you're hypnotized by her beauty. I can't wait to see more of her films this month on TCM because now I am hooked on Vivien. 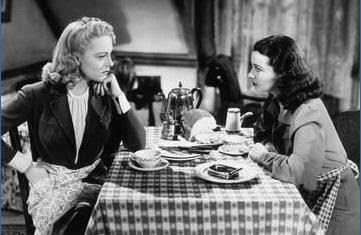 As for the supporting cast, Taylor is charming and romantic as usual. Virgina Field as Kitty gets most of the best lines in the film. Lucile Watson is quite good as Lady Margaret. And Maria Ouspenskaya is unbelievably stern as Madame Olga. Waterloo Bridge is now one of my favorite films of all time. A heart-breaking film, but also an amazing film. One of the best.
B+
Posted by monty at 7:58 AM