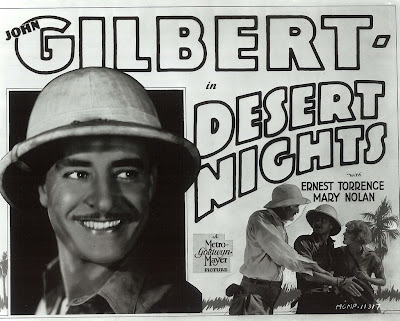 “Desert Nights” (1929) is a silent drama starring John Gilbert, Ernest Torrence, and Mary Nolan. Directed by William Nigh, this film is about a hostage’s psychological battle against his captors and the elements. Hugh Rand, played by John Gilbert, is a manager at the Crown Diamond Mines in Cape Town, South Africa. One day a Lord Steve Stonehill, played by Ernest Torrence, and a Lady Diana Stonehill, played by Mary Nolan, show up on invitation for hunting with Hugh. Unfortunately, it turns out that they are a pair of jewel thieves pretending to be the expected Lord Steve and Lady Diana Stonehill. After the two thieves hold up the main office of the mine and steal a fortune in uncut diamonds, they take Hugh as hostage to make an escape across the desert. With the burning sun of the Kalahari Desert and scarcely a drop of water, will the trio be able to survive or perish? 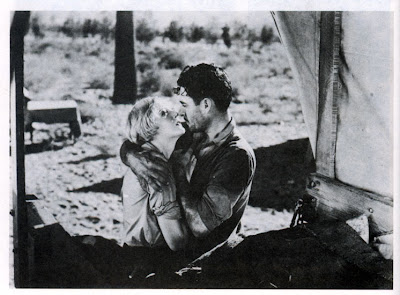 In early May of 1929, reviewers addressed the quality of John Gilbert’s final silent film, “Desert Nights.” “No Dialogue,” screamed a headline beneath the film’s title, and the opening words of the review state clearly that without the benefit of dialogue, “Desert Nights” leans heavily on its star and cast. Technology had already rendered a death blow to Gilbert’s career, and the film was not accepted on its own terms even though it is actually quite an entertaining story with great performances by the three leads. Gilbert’s charisma is evident throughout the film. I particularly liked the scenes where Gilbert’s character is having fun tormenting the two thieves by constantly reminding them that death is near. Ernest Torrence is perfect as the villain with a touch of humor. Mary Nolan looks beautiful and does display great chemistry with Gilbert. The two of them heat up the screen early on in a simple dinner scene where the two begin to know each other. The hot sexuality throughout the film between Gilbert and Nolan offers some nice tension. As a matter of fact, “Desert Nights” is pretty much Pre-Code risqué with its sweat, torn clothes, unbuttoned blouses and semi-nudity. One of my favorite scenes is when Gilbert is tied up and being threatened by Torrence. What is interesting about it is that Gilbert plays his game with equal viciousness and deceit. A gritty, action drama, “Desert Nights” is worth watching just for John Gilbert’s top notch performance. 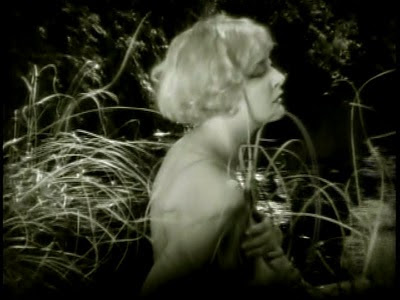 Once one of the most popular stars of the 1920’s, John Gilbert carries the dubious distinction of being the official poster boy for the “ruined by sound” movie star. Gilbert has been written about disparagingly in the modern era by critics who find him too excessive in his emoting. There is no doubt that he acts in the silent tradition, but one has to consider him in the context of his times. Gilbert was best at conveying emotion directly through physical behavior and action. Sound was a different world and it called for changes in acting. Gilbert’s sound debut seemed to go well enough. However, his first two features, “His Glorious Night” (1929) and “Redemption” (1930), were dated in content and received poor reviews. It is clear that Gilbert was being given the kind of material he handled so well in the silent years, but that the new technology had made it seemed old-fashioned. What really happened to Gilbert’s career is still unclear. Various reasons for his drop from the very top in 1927 to his death in 1936 have been put forth over the years. There is the “victim of sound” theory by which his voice does not suit his image or did not record well with the initial crude equipment. There is his bad luck at having his first two releases fail at the box office. There is also his unpleasant relationship with the powerful head of MGM, Louis B. Mayer, who is alleged to have sabotaged him, preventing him from obtaining suitable sound roles and assigning him to several low-budget projects. Finally, there is Gilbert’s own personality. He was often rumored to be temperamental and difficult to work with, and he was said to be insecure and addicted to alcohol. Out of all these theories, I think it was partly Mayer’s fault for assigning Gilbert to several low-budget projects and the advent of sound films, but not because he had a bad voice. Sound killed him because it diminished his ability to convey a man in love with fire and passion. Gilbert’s “great lover” acting style through his face and eyes seemed outdated in sound films. He had to relearn and to adjust his silent film persona, but the public didn’t give him the time in which to do it. Ironically, Gilbert’s films like “The Big Parade” (1925), “The Merry Widow” (1925) and “Flesh and the Devil” (1926) are the most revived and best known of all silent films together with the great comedies, some of Lon Chaney’s work, and the major Griffith films.


It is interesting to note that Mary Nolan became a star showgirl in the Ziegfeld Follies. It was there where she became involved with a married Ziegfeld comedian, Frank Tinney, stirring up a major sex scandal. Forced to flee to Germany to avoid the negative attention, she made six films there over the next two years for a number of production companies billed as Imogene Robertson, her birth name. Early in 1928, Mary signed a long-term contract with Universal, where she made seven films through 1930, along with another five on loan-out. In 1932, at the age of twenty-seven, Mary Nolan’s career was over. She was also addicted to morphine. By the late 1930’s, her looks were gone. When she died on November 12, 1948, at the age of forty-two, of liver disease, she weighed only seventy pounds.
Posted by Silentfilmfanatic at 4:48 PM