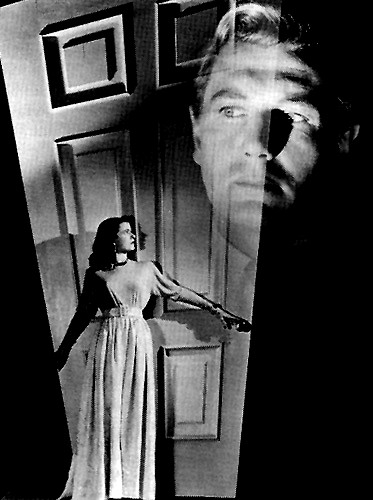 Secret Beyond the Door(1948). Psychological thriller. Directed by Fritz Lang, produced by Lang's Diana Productions. Cast: Joan Bennett and was produced by her husband Walter Wanger.

When Celia's beloved older brother Rick dies she is left with a large trust fund. Celia decides to vacation in Mexico with her friend, Edith Potter. After arriving, Celia and Edith witness a knife fight between two men over a woman. Celia can not tear herself from the fight which attracts the attention of an American architect, Mark Lamphere. They quickly fall in love and within days are married. After the wedding, Mark tells Celia about his work managing an architectural journal and his interest reproducing in exact replica of rooms in which brutal murders were committed. The couple's honeymoon plans change when Mark tells Celia he has received a telegram sending him back to New York City. Mark asks Celia to go ahead to his family estate in Lavender Falls, where he will meet her later. That night the maid tells Celia that Mark received no telegram. Puzzled, Celia travels to her new home, where she is met by his sister, Caroline Lamphere, who tells her that Mark has been delayed. Celia is shocked to learn that Mark has a young teenage son, David. Carey introduces Celia to Mark's secretary, Miss Robey, who wears a scarf to hide the side of her face that was burned years before when she rescued David from the fire. When Celia meets Mark at the train station, he reacts strangly to her lilac corsage. Later he tells Celia he is worried about money, as his journal is failing. During a large party at the house, Bob tells Celia he believes that Mark may have married her for her money. Mark then takes the guests through his recreated rooms, which feature the murders of wives by their husbands, and Celia becomes worried when he refuses to show her the last room, which remains locked. What will Celia find beyond the door?

Even if this movie might be a little cheesy, I loved the cinematography and the haunting music which helped create a dreamy atmosphere. The focus on the door and the naration keeps you interested as to what the secret really is.
Fun Facts:

Fritz Lang's version of Rebecca (1940) was a project fraught with disaster. It ran over budget and over schedule, while Lang was at constant loggerheads with his leading lady, Joan Bennett. The first preview of the film attracted comments like "beyond human endurance" and "it stinks". Bennett herself referred to the film as "an unqualified disaster". 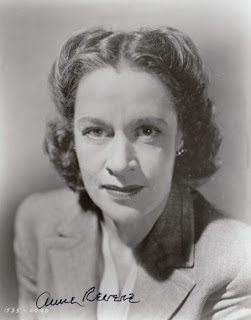 Anne Revere was a direct descendant of American Revolution hero Paul Revere. In 1926, she graduated from Wellesley College, then enrolled at the American Laboratory School to study acting with Maria Ouspenskaya and Richard Boleslavsky.

Revere made her Broadway debut in, The Great Barrington (1931). Three years later she went to Hollywood to reprise her stage role in the film, Double Door. She returned to Broadway to perform in the original production of, The Children's Hour(1934), and in later years she performed on the New York stage in: As You Like It, The Three Sisters, and Toys in the Attic (play), for which she won the 1960 Tony Award for Best Performance by a Featured Actress in a Play.

Revere worked as a character actress in films between 1934 and 1951. She played mother to Elizabeth Taylor, Jennifer Jones, Gregory Peck, John Garfield, and Montgomery Clift. She was nominated for the Academy Award for Best Supporting Actress three times and won for her performance in National Velvet. Other Revere films: The Song of Bernadette, Gentleman's Agreement, The Keys of the Kingdom, Body and Soul, and A Place in the Sun.

In 1951, Revere resigned from the board of the Screen Actors Guild after she pleaded the Fifth Amendment and refused to testify before the House Un-American Activities Committee. She would not perform until twenty years later in  the film, Tell Me That You Love Me, Junie Moon. She began performing on television in 1960, in soap operas: The Edge of Night, Search for Tomorrow, and Ryan's Hope.
Posted by Dawn at 3:33 AM