Alan Ladd, began his acting career performing in small role in the film, Citizen Kane, in which he played one of the reporters. His next featured role was in the film, Joan of Paris(1942). The film that helped launch Ladd's career was, This Gun for Hire, he played "Raven," a hit man with a conscience. Both the film and Ladd's performance played an important role in changing the "gangster" genre. Even though Robert Preston, played the romantic lead, the Ladd/Lake pairing stole the show, and would continue in another three films. 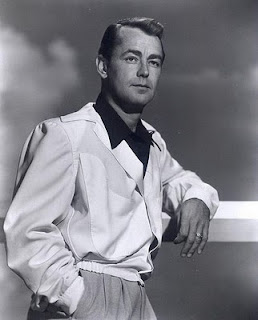 Ladd went on to perform in many Paramount films with a brief timeout for military service with the United States Army Air Force's First Motion Picture Unit.

He performed in, The Glass Key, his second pairing with Lake, and Lucky Jordan, with Helen Walker. The Filmwas about a crooked politician Paul Madvig, who decides to clean up his past, by refusing the support of the gangster Nick Varna and linking up with respectable politician Ralph Henry. When Ralph's son, Taylor Henry, a gambler and boyfriend of Paul's sister Opal, is murdered, his body is found ;on the street. Nick uses The Observer newspaper to point a finger at Paul Madvig.

In 1946, he starred in three adaptation of Richard Henry Dana's classic, Two Years Before the Mast, the Raymond Chandler original mystery The Blue Dahlia (his third pairing with Lake), and the WWII espionage thriller, O.S.S..

He formed his own production companies for film and radio and then starred in his own syndicated series Box 13, which ran from 1948-49. Ladd and Robert Preston starred in the 1948 western film, Whispering Smith, which in 1961 would become a short-lived NBC television series, starring Audie Murphy.

In 1949's version of The Great Gatsby, Ladd had the featured role of Jay Gatsby.

Ladd played the title role in the 1953 western Shane. The film was nominated for five Academy Awards, including Best Picture.

When Albert R. Broccoli formed Warwick Films with his partner Irving Allen, they heard Ladd was unhappy with Paramount and was leaving the studio. With his wife and agent Sue Carol, they negotiated for Ladd to perform in the first three of their films made in England and released through Columbia Pictures The Red Beret/Paratrooper (1953), Hell Below Zero(1954) and The Black Knight with each co-written by Ladd's regular screenwriter Richard Maibaum. In 1954 Ladd formed a new production company, Jaguar Productions, originally releasing his films through Warner Bros. and then with All the Young Men through Columbia. In 1963 Ladd co-starred in his last film,The Carpetbaggers.
Posted by Dawn at 4:44 AM