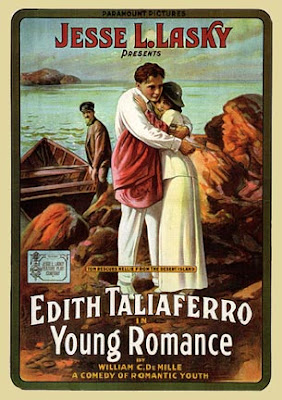 “Young Romance” (1915) is a silent romantic comedy starring Edith Taliaferro, Florence Dagmar, and Tom Forman. Directed by George Melford and written by William C. DeMille, the brother of Cecil B. DeMille, this film is about the trouble two young adults get into when they spend a week away from work pretending to be rich. The story begins with Nellie Nolan, played by Edith Taliaferro, working in the notions department of a large New York City department store. Meanwhile, Tom Clancy, played by Tom Forman, works on another floor in the hardware department. Coincidentally, both Nellie and Tom are reading the same romantic serial. However, Nellie dreams of romance while Tom dreams of adventure. Even though they have never met, both Nellie and Tom dream of living an existence of wealth and society. As a matter of fact, both of them have saved their money all year long to spend a week’s vacation at a resort in Maine that is frequented by the wealthy. When Nellie arrives at the resort, she poses as Ethel Van Dusen, a wealthy customer who comes to her notions counter. Tom, on the other hand, assumes the name of Roderick de Vignier, the hero of the romantic serial they both have been reading. Nelly and Tom meet at the beach when she is stranded on a rock and he comes to her rescue, just like their serial romance. They soon fall in love, each thinking the other is wealthy. Trouble ensues when a crook posing as a wealthy count, Spagnoli, played by Al Garcia, reads in the newspaper that the “real” Ethel Van Dusen has inherited a fortune and plots to kidnap her. Will Tom be able to rescue Nellie? Will they separate once they know neither is rich? 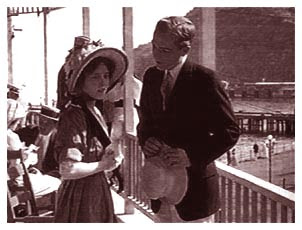 Not a major cinematic milestone like “The Birth of a Nation” (1915) or a heavy handed drama like “A Fool There Was” (1915), and "The Cheat" (1915), “Young Romance” (1915) stands up better today in comparison to the other more well known films of 1915. I found this intimate drama of two ordinary people to be absolutely delightful. Even though I wasn’t familiar with either Edith Taliaferro or Tom Forman before I saw this film, I was impressed with their charm and natural style of acting. They certainly added life to William DeMille’s story. I love that the story is tightly knit with light comedy, suspense, and a well-defined villain. Many modern critics might argue that the plot is rather predictable and coincidental, but that is what makes it so fun to watch. One of the things that impressed me the most about this film is the crisp photography thanks to the quality print and transfer. The beach scenes with silhouettes are simply gorgeous. The interior sets of the resort have a polished feel and look very modern considering the film is from 1915. The excellent piano and violin score by Robert Israel also adds to the enjoyment of the film. A forgotten film of early American cinema, “Young Romance”(1915) is a little gem waiting to be discovered.

It is interesting to note that Edith Taliaferro made only three silent films of which “Young Romance” (1915) was the first. The other two were “The Conquest of Canaan” (1916) and “Who’s Your Brother?” (1919). Edith apparently preferred stage work and performed in various productions well into the 1930’s. Tom Forman had a successful career as both an actor and director in silent films. He made his first film for Jesse Lasky in 1914. Forman directed such films as “Shadows” (1922), “The Fighting American” (1924), and “Devil’s Dice” (1926). In 1926, Forman committed suicide at the age of thirty-three. 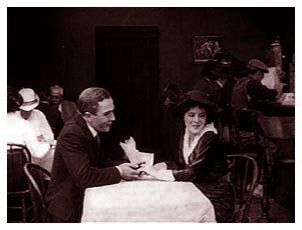 Posted by Silentfilmfanatic at 3:02 AM