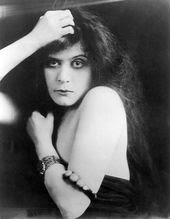 Edith Taliaferro, was a popular Broadway actress of the late 19th and early 20th centuries. She was active on the stage until 1935 and she had roles in three silent films.

Henry Arthur Jones once said "she was the greatest child actress." She made her acting performance at the age of two in Shore Acres. It was said that she landed the part because her sister Mabel was too big to play the character.

At the age of ten, she was the youngest Shakespearean actress on the stage. She performed in the production of A Midsummer Night's Dream (1904).

When she returned to New York, Taliaferro performed with Clara Bloodgood in The Girl With The Green Eyes and Polly of the Circus (1907).

She is best known for her 1913 performance in Rebbecca of Sunnybrook Farm. Her other successful theatrical performances include: Young Wisdom, Tipping The Winner, A Breath of Old Virginia, Mother Carey's Chickens, The Bestsellers, Please Get Married, Kissing Time, A Love Scandal, The Evangelist, Tarnished and Private Lives.