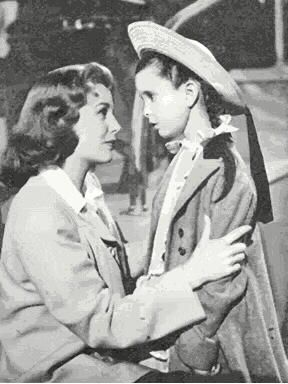 Music for Millions (1944). Musical/comedy. Directed by Henry Koster. Cast: Margaret O'Brien, José Iturbi as Himself, Jimmy Durante, June Allyson and Marsha Hunt. It was nominated for an Academy Award in 1946.

When seven-year-old "Mike" travels to New York from Connecticut by train, she is worried when she is not met by her sister, Barbara Ainsworth. Mike is soon cornered by a policeman, who takes her to Symphony Hall, where Babs, a bassist, is performing. Mike runs onto the stage and annoys conductor José Iturbi, in the middle of the concert. Iturbi, wants to fire Babs, until his stage manager, "Andy" Andrews, reminds him that with so many of the male players gone because of the war, he cannot afford to fire Babs. Babs, who was unaware that Mike was coming for a visit, is thrilled to see her. Babs and the female orchestra members, sneak Mike into their "no children" boardinghouse. After Babs faints the doctor shares a secret with Mike, telling her that Babs is pregnant.

Although Mike and her roommates have tried to keep it a secret about Babs's condition, their obvious concern alerts Iturbi, who is sympathetic.

Just before the orchestra leaves for Florida on a tour, a telegram arrives for Babs at the boardinghouse. Rosalind, one of Babs's roommates, reads the message herself. As feared, the telegram has bad news about her husband Joe and Rosalind and the other girls decide not to tell Babs anything about it until after the baby is born.

Even though Music for Millions, is called a musical comedy, you will need plenty of "hankies". Jimmy Durante's comedy, provides the smiles. You will also enjoy the beautiful classical concertos played by Jose Iturbi and his mostly female orchestra. Giving their support to the boys in uniform.

Email ThisBlogThis!Share to TwitterShare to FacebookShare to Pinterest
Labels: margaret o'brien, music for millions(1944), summer under the stars 2010, the 40s