I haven't seen this film yet, but it sounds pretty cool. 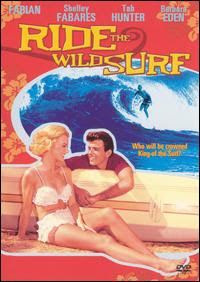 The story follows three surfers Jody Wallis (Fabian), Steamer Lane (Tab Hunter) and Chase Colton (Peter Brown), who come to Hawaii's Oahu Island to ride the world's biggest waves and compete against surfers from all over the world. 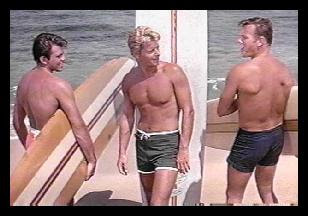 Steamer falls in love with Lily Kilua (Susan Hart), whose mother objects to the romance because she considers surfers to be "beach bums," because her husband -- a surfer -- left home and family to follow the surf circuit. Self-described college drop-out and surf bum Jody falls for the demure Brie Matthews (Shelley Fabares), who challenges him to return to college. In the case of the relatively straight-laced Chase, he finds himself pursued by the adventurous Augie Poole (Barbara Eden).

The main story, though, is the challenge to surf the monster waves at Waimea Bay, and fit in among the champion surfers there. Despite conflicts, injuries and rocky romances, Wallis, Chase and Steamer prove themselves brave -- or crazy -- enough to try to be the last one to ride in the highest wave. 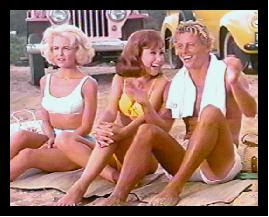 Unlike most of the Hollywood beach movies - whose location was Southern California – Ride the Wild Surf was filmed in Hawaii in 1963 at a time when environmental conditions created exceptionally large waves. In November and December 1962, Waimea broke often. The jet stream had altered its course temporarily and huge west swell surfs became common all the way through the following February, which was when Columbia arrived to shoot the movie.
Posted by monty at 9:17 AM