I decided to kick off me and Dawn's summer beach theme this month with that 1959 classic Gidget, starring the ever lovable Sandra Dee. 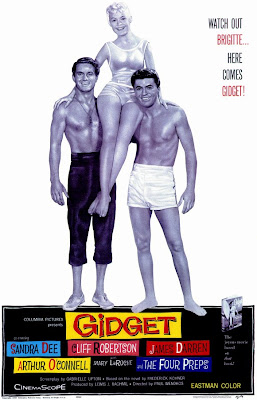 On a jaunt to the beach with her bikini-clad girlfriends, tomboy Frances Lawrence (Sandra Dee) meets surfer Moondoggie (James Darren). She quickly becomes infatuated with him, but he shows no romantic interest.
At home, Francie importunes her parents for a surfboard. Russ and Dorothy Lawrence (Arthur O"Connell and Mary LaRoche) grant their daughter's request and the excited youngster returns to the beach to surf. She associates with an all-male surfer gang led by the worldly beach bum, The Kahuna (Cliff Robertson). The gang dubs their female associate "Gidget", a portmanteau word based on 'girl' and 'midget'.

Hoping to make Moondoggie jealous, Gidget hires one of the other surfers in the gang to be her date to a Luau party on the beach. Her plan backfires when the surfer she hired pawned the job off on none other than Moondoggie, unaware that he was the one Gidget wanted to make jealous. Gidget lies and tells Moondoggie that it is Kahuna that she wants to make jealous, and they have a romantic evening at the Luau. Eventually Moondoggie says something that upsets Gidget, and she makes Kahuna take her to a nearby beach house. Alone with Kahuna, Gidget tries to make Kahuna take her virginity, but he is reluctant, and soon Gidget's worried parents show up with the police and take her home. Gidget's parents ground her for the rest of the summer for her disobedience. 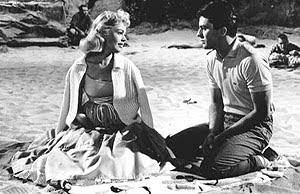 In the end Mr. Lawrence arranges a date for Gidget with Jeffrey Matthews, the son of a friend. To her surprise, Matthews turns out to be none other than Moondoggie. He professes his love and, as an act of romantic devotion, asks Gidget to wear his class pin.

The surfer gang includes Robert Ellis as Hot Shot, Joby Baker as Judge, Tom Laughlin as Lover Boy, Burt Metcalfe as Lord Byron, and Doug McClure as Waikiki. Sue George plays Gidget's girlfriend Betty Louise, and the musical group, The Four Preps appear as themselves
.
The studio wanted Elvis Presley to play the role of Moondoggie, but his fees were too expensive.

Sequels followed immediately but without Sandra Dee. Producers cast Deborah Walley for Gidget Goes Hawaiian (1961) and then Cindy Carol in Gidget Goes To Rome (1963). A TV series followed in 1965 starring newcomer Sally Field, which only lasted one season. A 1969 TV movie called Gidget Grows Up featured Karen Valentine in the title role. Two more TV movies followed: 1972's Gidget Gets Married with unknown Monie Ellis as Gidget and 1985's Gidget Summer Reunion starring Caryn Richman, which led to a fairly successful 2 season run. And other than Sandra Dee, I have to say Ms. Richman made a perfect Gidget, albeit one more adult, more still fun.