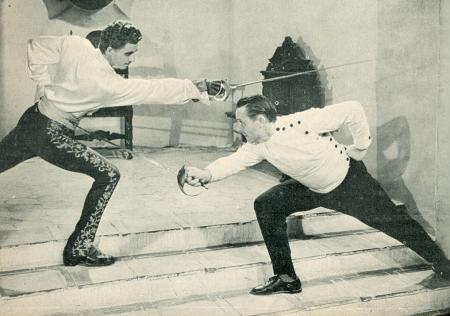 My favorite Basil Rathbone scene is from, The Mark of Zorro (1940), an adventure film directed by Rouben Mamoulian and produced by Darryl F. Zanuck. Cast: Tyrone Power, Linda Darnell and Basil Rathbone. I'm a huge fan of movies with duel fighting. In this scene the action unfolds into a wonderful duel between to actors who look as if they are really enjoying what they are doing..
The film was Nominated for Academy Award for the Best original score in the 1941 Academy Awards.

Based on the Johnston McCulley story The Curse of Capistrano, originally published in 1919, which introduced the masked Zorro, the movie's story is set in Southern California during the early 19th century.

It is about the son of a wealthy ranchero, Don Alejandro Vega who returns to California after studying in Spain, only to become angry at the way the people were being mistreated by Governor Quintero. Don Diego decides to become Zorro, a defender of the people. He falls in love with the governor's niece, Lolita and shares with the governor's wife Inez, how wonderful Madrid is hoping to talk her into moving there with her husband. He also has to fight off the governor's henchman, Captain Pasquale.

This film is a remake of the 1920 silent version, The Mark of Zorro, with Douglas Fairbanks. Its largest claim to fame is the climactic duel toward the end between Zorro and Captain Pasquale. Rathbone was known already in Hollywood as an outstanding Classical fencer.