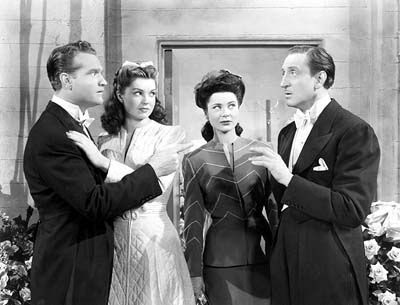 Basil Rathbone, performed in over 70 films, mostly costume dramas, swashbucklers, and horror films. He usually played suave villains or morally ambiguous characters, such as Murdstone in David Copperfield (1935) and Sir Guy of Gisbourne in The Adventures of Robin Hood (1938). His most famous role, was that of Sherlock Holmes in fourteen Hollywood films made between 1939 and 1946 and in a radio series. His later career included Broadway and television work; he was awarded a Best Actor Tony Award in 1948. So it is truly a surprise to find him performing in the film: Bathing Beauty (1944). A Musical, with Red Skelton, Basil Rathbone and Esther Williams. At the time of its release, this was MGM's third-highest grossing film, after Ben-Hur: A Tale of the Christ (1925) and Gone with the Wind (1939).

The story is about a songwriter Steve Elliott, who is getting ready to marry Caroline Brooks, who has promised to give up her job as a college swimming instructor once they are married. Steve also plans to quit his songwriting career, even though producer George Adams(played by Basil Rathbone) has already hired him to write new songs for a water ballet show. When George hears Steve talking about his "retirement", he comes up with a plan to stop the marriage and conspires with Maria Dorango, to help him. During the ceremony Maria rushes in, claiming that Steve is her husband and the father of her three redheaded children. Even though Steve says he is innocence, Caroline returns to Victoria College.

In another Basil Rathbone scene: Steve is visited by George, who promises to blackmail him unless he finishes his songs. When Steve swears revenge on the person who hired Maria, George feeling remorseful offers to help Steve do his homework.

In Basil Rathbone's last scene: Maria is on campus, looking to expose George, who has been trying to get rid of her. George unexpectedly arrives, while Maria makes her presence known to Caroline. Later, Steve promises to write songs for George's water ballet show on condition he make Caroline the star. George agrees, and after Maria is finally able to tell Caroline the truth, Caroline reunites with Steve, who then gives George a piece of her mind.

It seems that Basil might have been a little out of his element in this film, but he stills gives a wonderful performance. I'm a little surprised that TCM added Bathing Beauty, to their line up of Basil Rathbone featured films.
Posted by Dawn at 4:17 AM

Email ThisBlogThis!Share to TwitterShare to FacebookShare to Pinterest
Labels: basil rathbone, summer under the stars 2010