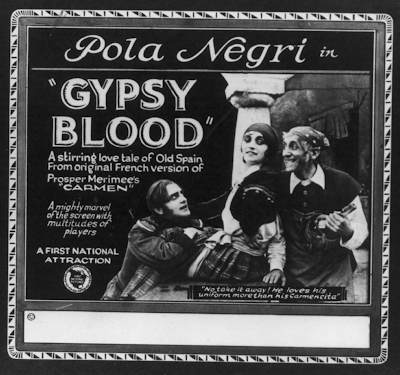 “Gypsy Blood” (1918) is a silent drama starring Pola Negri, Harry Liedtke, and Leopald von Ledebur. Directed by Ernst Lubitsch, this film was the first of his German productions to reach the United States. Adapted from Prosper Merimee’s 1845 novella “Carmen,” Lubitsch’s version is basically the story told in extreme. The film begins with Don Jose Navarro, played by Harry Liedtke, a soldier in the Spanish army coming home on leave to visit his fiancée, Dolores, played by Grete Diercks, and his mother, played by Sophie Pagay. While he is there, he receives the news that he has been promoted to sergeant and is to report to duty in Seville. Dolores is concerned because she has heard about how seductive the ladies are in that city. Don Jose is immediately tempted when La Carmencita, a gypsy and cigarette factory worker, played by Pola Negri, is arrested for pulling a knife on one of ther co-workers and he has to break up the disturbance. La Carmencita then begins to work on Don Jose. As he opens his heart to La Carmencita, Don Jose begins a downward spiral that leaves him from a sergeant to an outlaw. Will Don Jose ever get his life back on track? 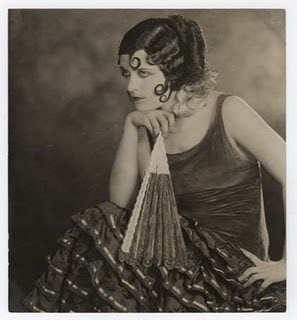 Both the archetypal and stereotypical grandmother of the Hispanic vamp in American film as well as the Hispanic vamp produced by other film industries surely was Carmen. By 1929, there had been so many versions of this work that anyone could recognize the plot as the basis on which most vamp stories for the screen were founded. The Carmen cycle primarily consists of film adaptations of the Prosper Merimee 1845 novella “Carmen.” During the silent period alone, various versions of the film were marketed in the United States with “Carmen” as the title. Yet other films without that specific title were clearly adapted from the story of Carmen. A very early version, “A Love Tragedy in Spain” (1908, Melies) is billed as a thrilling episode in the style of Bizet’s “Carmen.” In this case, between a Spanish smuggler and a local dancer. The first film with the title “Carmen” was a French production (1910, Pathe/Film d’Art), followed by two 1913 productions, one by Monopol, starring Marion Leonard and the other by Thanhouser, starring Marguerite Snow. Charlie Chaplin directed and acted in an Essanay production in
1915, “Charlie Chaplin’s Burlesque on Carmen” with Edna Purviance as his leading lady. This film played upon and parodied the other two films that in turn competed with each other in 1915. The Fox production with Raoul Walsh directing featured the notorious vamp specialist, Theda Bara, and the Lasky-Paramount production directed by Cecil B. DeMille featured Geraldine Farrar, a beautiful and talented opera star who often sang opposite Caruso. In 1917, a Spanish production by Cine was released in the United States with Spanish language title cards, and in 1918, Ernst Lubitsch directed “Gypsy Blood” in Germany starring the Polish film star Pola Negri, who soon began to work in and become very popular in the United States. Lubitsch returned quickly to this story, producing for the American market in 1921, “Gypsy Blood” for First National. The original title was envisioned as “Carmen” because it was basically the story told in extreme: The Spanish vamp, La Carmencita, played by Pola Negri, was portrayed as a heartless, ignorant, immoral Spanish gypsy without one redeeming trait. The success of “Gypsy Blood” relies heavily on the magnetic personality of Pola Negri. She was an excellent actress, capable of real passion and fire. It’s amazing that Pola Negri’s artistry comes through with enormous 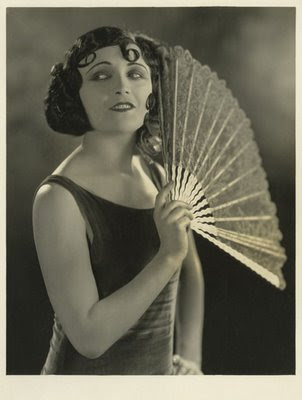 energy even though there are a few scenes that are basically unwatchable due to nitrate decomposition. Negri and Lubitsch found popularity with American audiences not only with “Gypsy Blood,” but also with “Passion” (1920) and “One Arabian Night” (1921). After these films were released so successfully, Negri and Lubitsch were inevitably invited to come to America. Negri’s American film debut was in "Bella Donna" (1923), which was directed by George Fitzmaurice and gave her a big start. However, Negri’s most imaginative work was always done with Lubitsch, who saw more possibilities in her than most of her other directors did. One of Negri’s best work was “Forbidden Paradise” (1924), which reunited her with Lubitsch. It was a superb combination of comedy, romance, and intrigue which earned Negri excellent reviews. Negri knew exactly how to play hot love scenes and light comedy and she always responded to the Lubitsch touch. “Gypsy Blood” is worth watching just to see Pola Negri in one of Lubitsch’s earliest works as director.

It is interesting to note that Pola Negri's career was over with the advent of sound films. Lubitsch, on the other hand, invented the modern movie musical and became known for his witty and sophisticated comedies with naughty innuendo before the enforcement of the Hays Code with such films as "The Love Parade" (1929), "The Smiling Lieutenant" (1931), "One Hour With You" (1932), "Trouble in Paradise" (1932), and "Design for Living" (1933).

Posted by Silentfilmfanatic at 3:14 AM