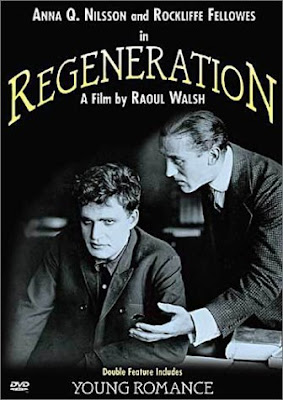 "Regeneration” (1915) is a silent crime drama starring Rockliffe Fellowes, Anna Q. Nilsson, and Carl Harbaugh. Directed by Raoul Walsh, this film is credited as being the first feature length gangster film. It is also notably, the first feature length film directed by Walsh, one of the greatest early directors whose career lasted into the 1960’s. Spanning several years, this drama traces the life and times of a child of the slums of New York City. The story begins with Owen Conway, a ten-year-old orphan boy, played by John McCann, who is living with his foster parents in a tenement building where life is anything but peaceful and nurturing. Poverty causes many drunken arguments and Owen has no responsible role models in his life. Years pass and we see Owen as a seventeen-year-old, played by H. McCoy, chopping ice on a dock. He fights with gang member, Skinny, played by William Sheer, who is taking advantage of a smaller boy. Owen, in truly heroic fashion, beats the cowardly Skinny, which impresses other people on the docks including Skinny’s gang pals. Next we spot a twenty-five year old Owen, played by Rockliffe Fellowes, in a saloon. He is now the gang leader and the rising star in this world. When a highly publicized anti-gang district attorney, Ames, played by Carl Harbaugh, visits the saloon to show off his socialite friends, Owen saves them from an attack by his gang buddies and wins the notice of society girl, Marie Deering, played by Anna Q. Nilsson. Marie, who is called Mamie Rose, decides to abandon her high class environment to become a settlement worker in the city’s slum district. She begins teaching Owen how to read and write, and he comes to realize that he has taken the wrong course in life. Eventually, Owen and Mamie Rose fall in love which causes him to leave the gang and he tries to reform against great odds. Will Owen stay on the road to regeneration? 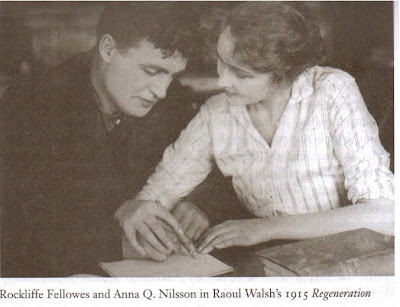 Dealing with violent drunkenness, battered children, gangsters, murder, and attempted rape, “Regeneration” is surprisingly realistic for its age. Filmed on the Bowery, in Chinatown and in dreary tenements of Manhattan’s distressed Lower East Side, real street scenes were used as well as many of the extras. Walsh’s dynamic use of close-ups, dolly shots, and cross-cutting between scenes makes this film look more modern than many silents made ten years later. Eventhough there is considerable nitrate decomposition in the middle of the film, it is still watchable. Rockliffe Fellowes, who somewhat resembles actor Robert Stack, and Anna Q. Nilsson give thoroughly believable performances with their naturalistic acting. A largely overlooked film, “Regeneration” gave birth to a new genre and is one of the finest examples of early American cinema.


Born in New York City to a Spanish mother and Irish father, Raoul Walsh spent his late teens as a cowboy, traveling through Mexico and the American West. He later worked with his uncle as a seaman en route to Cuba. One of his first assignments as a filmmaker was working for D.W.Griffith, who sent him to Mexico to film the real-life exploits of Pancho Villa. Walsh directed Dolores del Rio in her first major screen role as the French farm maiden in the hit silent film “What Price Glory?”(1926), and as Carmen in “The Loves of Carmen” (1927). Walsh directed and shaped the exploits of the Cisco Kid in the early outdoor sound film “In Old Arizona” (1929). He had intended to play the leadi 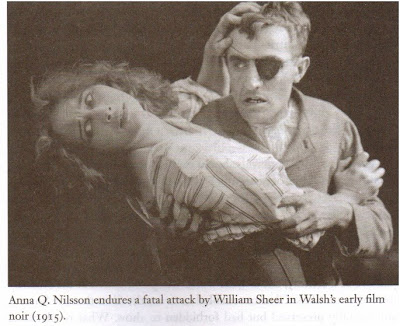 ng role himself, but an unfortunate accident on location resulted in the loss of one eye, which ended his career as an actor. Walsh had already directed most of the outdoor action sequences, and director Irving Cummings guided actor Warner Baxter, who replaced Walsh, into an Academy Award winning role as the Cisco Kid. Walsh’s critical acclaim now rests primarily with directorial work he did for Warner Bros. from 1939 through 1951, such as “The Roaring Twenties” (1939), “They Drive by Night” (1940), “High Sierra” (1941), “The Strawberry Blonde” (1941), “Colorado Territory” (1949), “White Heat” (1949) and “Distant Drums” (1951).
Posted by Silentfilmfanatic at 3:41 PM