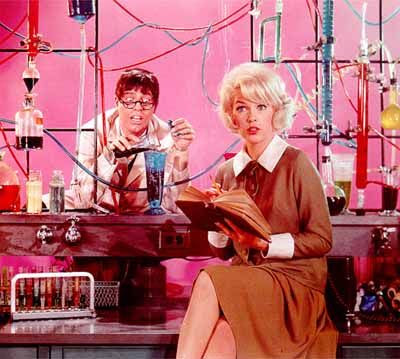 Professor Julius Kelp (Jerry Lewis), is a nerdy, introverted, accident prone, university professor who always seems to find himself in trouble with the university by continually destroying the classroom lab. When a football-player bullies Kelp he decides to join a gym, with no results. He then invents a potion that turns him into the handsome, smooth, obnoxious, Buddy Love.

As Buddy Love, he now as the confidence to date one of his students, Stella Purdy (Stella Stevens). Who finds herself strangely attracted to him. Buddy impresses the crowd with his jazzy personality at the Purple Pit, a nightclub where everyone hangs out. He also teaches the bartender, how to mix the cocktail, The "Alaskan Polar Bear Heater". Which is two shots of vodka, a little rum, some bitters, a smidgen of vinegar, a shot of vermouth, a shot of gin, a shot of scotch, a little brandy, a lemon peel, orange peel, cherry, some more scotch. At one point the bartender says "You going to drink this here, or are you going to take it home and rub it on your chest?

Love says "mix it nice" and pour it into a tall glass. The bartender asks if he can take a sip, when he does he freezes like a statue. While the drink started as fictional, it now listed among real drinks.

Later that night, Buddy performs at the student dance, and while on stage, the formula starts to wear off. Will this Jekyll and Hyde's real identity be revealed?

I thought Jerry Lewis must be a very talented actor to be able to manage two very distinct characters with two distinct personalities.

Buddy Love is often thought to be Lewis' former show business partner Dean Martin. Film Critic Danny Peary wrote in his book Cult Movies that the character of Love is actually the real counterpart of Jerry Lewis. Les Brown and his Band play themselves in the senior prom scenes. Stella Steven's costumes (and the rest of the casts costumes as well) were designed by Edith Head.

The Nutty Professor was filmed mostly on the campus of Arizona State University (Tempe, AZ) in 1962 with the prom portion filmed in the newly completed Gammage Auditorium Hall (designed by Frank Lloyd Wright). 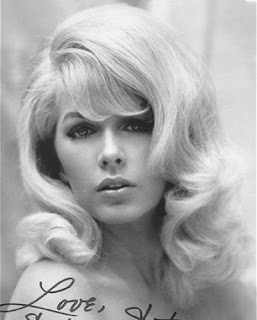 Stella Stevens was first under contract to 20th Century Fox. Then after performing in the role for the musical, Li'l Abner (1959), she signed a contract with Paramount Pictures (1959-1963) and later Columbia Pictures (1964-1968). She shared the 1960 Golden Globe Award for "Most Promising Newcomer - Female", with Tuesday Weld, Angie Dickinson and Janet Munro for the film, Say One For Me.

In 1962, Stevens performed with Elvis Presley in the movie, Girls! Girls! Girls!. Later that year, she played Jerry Lewis's love interest in The Nutty Professor. This was followed by other comedy, The Courtship of Eddie's Father and opposite Dean Martin in the "Matt Helm", The Silencers.

Plus How to Save a Marriage and Ruin Your Life.

Stevens was featured in the western, The Ballad of Cable Hogue(1970). She also performed in the film, The Poseidon Adventure(1972), as the wife of Ernest Borgnine's character.

Stevens was a regular on the 1981-1982 prime time soap opera Flamingo Road. She teamed with Sandy Dennis in a touring production of an all-female version of Neil Simon's The Odd Couple, playing the Oscar Madison character. She had a contract role on NBC's daytime drama Santa Barbara as Phyllis Blake from 1989 to 1990.