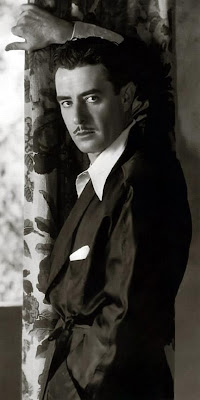 I have already posted a profile post on the handsome John Gilbert.((Sigh)). Please click his name on the tag line located at the bottom of this post, to read Noir and Chick Flicks collection of John Gilbert info.

Please Click to View a Awesome John Gilbert's daughter Interview. Written by: TheLadyEve, from the "Cafe". 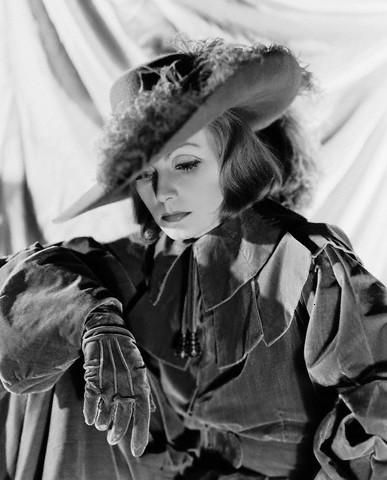 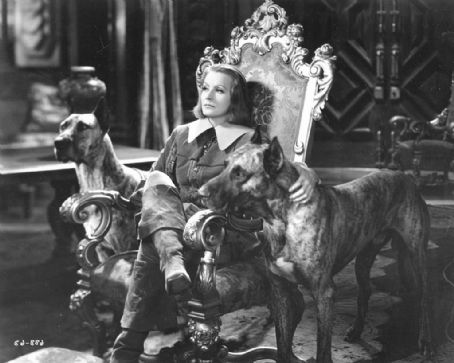 Queen Christina (1933). Pre-code historical/ drama. Director: Rouben Mamoulian.The film was written by H. M. Harwood and Salka Viertel with dialogue by S. N. Behrman, based on a story by Salka Viertel and Margaret P. Levino. Cast: Greta Garbo, John Gilbert, Ian Keith and Lewis Stone. The movie is very loosely based on the life of the 17th century Queen Christina of Sweden, who, in the film, falls in love during her reign but has to deal with the political realities of her society. It was billed as Garbo's return to cinema after an eighteen-month hiatus.

In 1632, after her father, King Gustavus Adolphus of Sweden, is killed on the battlefield, six-year-old Christina raised as a boy is crowned "king" of Sweden . And then promises to her court, that Sweden will fight until it wins the war.

Many years later, the now-grown Christina, who dresses in men's clothing, meets with her council and states for the good of the country, they must find peace. Christina then argues with Oxenstierna about marrying her Swedish-born cousin, Prince Palatine Charles Gustavus. Not wanting to marry a man she does not love, Christina rejects Oxenstierna's demands. To escape Christina, goes on a hunting trip with her servant Aage.

While riding, Christina comes across the path of a coach filled with Spaniards, which have gotten stuck in a ditch. Because she is dressed as a man, Christina is not recognized and is treated as a male servant by Don Antonio de la Prada.

Later, Christina and Aage seek shelter at the Inn and once again meet Antonio and his men. Antonio apologizes when he learns that Christina is a gentleman of means and engages him/her, in conversation. Christina impresses Antonio, after which insists that he take her to his room, the last room in the inn.

After a polite argument, the couple decide to share the room. While Antonio undresses, Christina becomes uncomfortable, but finally reveals that she is a woman by removing her jacket. Surprised, Antonio takes Christina in his arms.

For the next several days, Christina and Antonio, who is still unaware of her royal identity, fall in love and promise their lasting devotion to each other. Needing to accomplish his mission, Antonio leaves the inn, but arranges to meet with Christina in Stockholm.

Back at the palace, Christina is confronted by Magnus, who questions her about her disappearance. Christina's only care, is her reunion with Antonio and dresses up in her most beautiful gown to greet him. When Antonio is introduced to Christina, he is surprised but maintains his composure.

Later in private Antonio, accuses her for playing with his affections and presents to her a proposal of marriage. Christina ignores her royal duties to spend time with Antonio. Jealous, Magnus hires two men to spread rumors about the queen's scandalous behavior, and one night in the Palace, Christina is met by an angry mob.


After calming the crowd, Christina confronts Magnus, where he threatens to have Antonio killed. For his protection, Christina orders Antonio back to Spain, unaware that the Spaniard has challenged Magnus to a duel. Christina calls together her court, announces that she is stepping down from the throne. While Christina says good by to her heartbroken court, Antonio and Magnus engage in their sword fight. What will Christina find when she reaches Antonio's ship?

Since John Gilbert was becoming less popular as a leading man, Greta Garbo was doing him a big favor by requesting him as the male lead. Unfortunately, the film did not help to re-establish Gilbert, and soon after he dropped out of pictures altogether.

I just watched Queen Christina for the first time. For me, it is a beautiful and haunting film. John Gilbert and Greta Garbo had wonderful on screen chemistry. My favorite scene in the movie, is when she is enjoying herself as a woman. 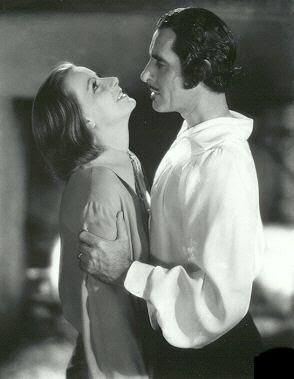 Email ThisBlogThis!Share to TwitterShare to FacebookShare to Pinterest
Labels: john gilbert, summer under the stars 2010