"Her Night of Romance" (1924) Constance Talmadge 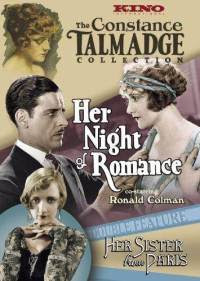 “Her Night of Romance” (1924) is a silent romantic comedy starring Constance Talmadge, Ronald Colman, and Jean Hersholt. Directed by Sidney Franklin, this film is about an impoverished English nobleman who impersonates a doctor in order to woo an ailing American heiress. The story begins with millionaire heiress, Dorothy Adams, played by Constance Talmadge, and her father, Samuel C. Adams, played by Albert Gran, having just arrived in Southampton, England, to seek rest for Dorothy’s “heart” condition. Walking down the gangplank, Dorothy trips and falls into the arms of Sir Paul Menford, a young, handsome English nobleman who is broke. Menford assists Dorothy whom is visibly smitten by him. However, she walks away with her father. When Menford is forced to sell his estate, his last asset, he asks his realtor, Joseph Diamond, played by Jean Hersholt, to lend him more money. Diamond refuses to provide him with any more loans until the estate is sold. At this point, Diamond suggests to Menford to marry a rich girl and shows him a newspaper photo of Dorothy Adams. Menford jokingly tells Diamond to get him the girl so he can have one hundred percent of his estate. Menford finally gets his loan, but he must quickly return to the home of his uncle, Dr. Paul Scott, to get his bag which he left on his way out of the country. Coincidentally, Mr. Adams sends his butler to get Dr. Scott to examine Dorothy. When Menford comes out from Dr. Scott’s home with what looks like a medical bag, the butler assumes he is Dr. Scott and hands him Mr. Adam’s card. Recognizing the name, Menford decides to pose as Dr. Scott. Posing as the doctor, Menford and Dorothy’s relationship blossoms. Feeling overwhelmed with guilt, Menford sends Dorothy a note stating he is an imposter and will no longer impose on her. Totally distraught, Dorothy decides to spend the night at Menford Manor, which her father has recently purchased. However, she is not aware that Menford and the Dr. Scott she has been seeing are the same person. While Dorothy is in bed that night, Menford arrives inebriated and comes into her bedroom by a 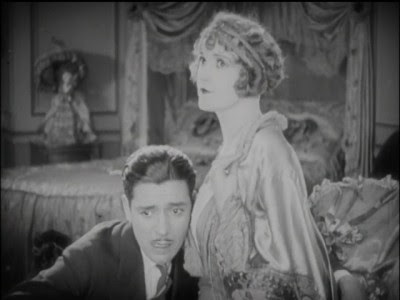 ladder at the balcony. Hiding under the covers, Dorothy does not know who this man is, but when she realizes his identity, she throws him out of the room. The next morning a series of misunderstandings begin and increase in number and pace as the day goes on. Will Dorothy and Menford be able to resolve their problems? Will their romance unravel just as it was getting started?

Constance Talmadge was one of Hollywood’s most popular comediennes. She achieved film immortality as the Mountain Girl of ancient Babylon in D.W. Griffith’s “Intolerance” (1916). Her older sister, Norma Talmadge, had become a star several years before her as a dramatic actress, while Constance’s specialty was sharp, witty comedies. When Norma married producer Joseph Schenck, he was persuaded to take control of both his wife’s and sister-in-law’s career. He set up the Constance Talmadge Film Company in 1917, solely to produce bubbly, light comedies with her. She was given full control regarding scripts and costars, and her films were enormously popular. Schenck continued to supervise Constance Talmadge’s career into the 1920’s, when there were fewer films but with higher production values than ever before. He had worked out a lucrative deal with First National, by which Talmadge received a little over $ 93,000 for each film. With the coming of sound, the First National agreement was terminated in 1927. She made one last silent film, “Venus” (1929) for United Artists release and happily retired. Constance Talmadge made a total of 84 films from 1914 to 1929. 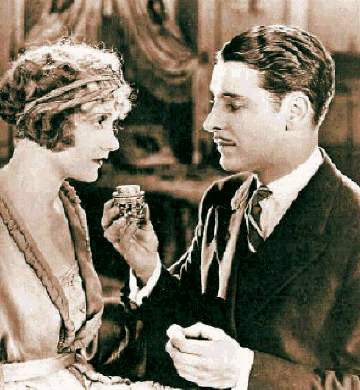 “Her Night of Romance” (1924) is a typical example of Constance Talmadge’s early 1920’s comedies. The film is greatly helped by a nice script by Hans Kraly, who often worked with director Ernst Lubitsch. With its mistaken identities, entrances, exits, and complications, it is light, escapist fare that has its roots in typical bedroom farce. However, Constance Talmadge and Ronald Colman play with confidence and it is easy to see that Colman is headed for big stardom. Constance Talmadge, an actress of undeniable charm, makes the most of her expressive eyes. Her acting abilities come through in many scenes throughout the film. One of the best scenes in the film is Menford’s first visit to Dorothy as a doctor. When Dorothy tells him that her heart feels bumpy and to please listen to it, he responds by opening up his “medical” bag. Unfortunately, when he opens the bag he finds no stethoscope. Nervously, Menford tells Dorothy he will use his ear. At this point, Menford slowly and nervously gets close to Dorothy’s chest to listen to her heartbeat. This scene is very sexy and seductive, but it is handled very properly by Colman. What I liked most about the film is that it is so entertaining and fun to watch. Constance Talmadge was clearly a natural comedienne, and it’s a shame that so few of her films are available on DVD. “Her Night of Romance” (1924) is worth watching just to take a glimpse at one of the greatest comediennes of the silent screen. 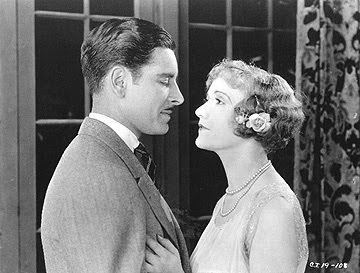 Posted by Silentfilmfanatic at 2:53 AM