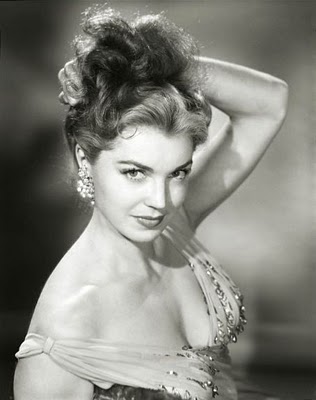 Esther Williams, is a retired American competitive swimmer and MGM movie star. Esther is also one of my favorite actress. Williams set multiple national and regional swimming records as part of the Los Angeles Athletic Club swim team. Unable to compete in the 1940 Summer Olympics because of World War II, Williams joined Billy Rose's Aquacade, where she took on the role left by Eleanor Holm. After the show move from New York City to San Francisco. Where she performed five months with Olympic swimmer and Tarzan star, Johnny Weissmuller.

It was at the Aquacade that Williams caught the eye of MGM scouts. After performing with Mickey Rooney in an Andy Hardy film, and five time co-star Van Johnson in A Guy Named Joe, Williams made films in the 1940's and early 1950's known as "aquamusicals", which featured beautiful performances with synchronized swimming and diving.

Williams and Lawford are wonderful together and so are Ricardo Montalban and Cyd Charisse. Especially, during their beautiful dance numbers. If you love happy and romantic musicals you'll love this movie. And don't forget.. we get to see Esther doing what she does best in beautiful water performances.

The film begins when Ricardo Montez, is playing the part of a Navy man in love with a Polynesian woman, played by his fiancee, Rosalind. They hired Lawrence a Navy Lieutenant, as technical adviser, to help the director with the film's authenticity. During the filming of one of Rosalind and Ricardo's love scenes, Larry interrupts the shooting to take the opportunity to kiss Rosalind. That evening, at the Royal Aloha hotel, the cast and crew attend a nightclub show performed by Xavier Cugat and his orchestra. Larry, finds another opportunity to get close to Rosalind, and asks her to dance. She refuses thinking that he is too forward.

The next day, Larry is to circle the set once in an airplane with Rosalind on board, but he flies the plane to the tropical island where they first met. Larry wants one dance with her before he returns her to the set. Rosalind, says she will kiss him to prove that she has no feelings for him, but the kiss shows that she is an attracted to Larry. When Larry and Rosalind return to the airplane, they find that the wheels and other parts have been stolen by the islanders. The two set out to find the natives village, but become separated. Will they be rescued before the natives have them for dinner? (wink/wink).

In 1952, Williams performed in her only biographical role, as Australian swimming star Annette Kellerman in Million Dollar Mermaid, which would go on to become her nickname while at MGM. Williams left MGM in 1956 and performed in feature films, followed by several water-themed television specials, including one from Cypress Gardens, Florida.

Since her retirement from film in the 1960s, Williams has become a businesswoman, lending her name to a line of swimming pools and retro swimwear, instructional swimming videos for children, and acting as a commentator for synchronized swimming at the 1984 Summer Olympics in Los Angeles.
Posted by Dawn at 4:46 AM

Email ThisBlogThis!Share to TwitterShare to FacebookShare to Pinterest
Labels: birthday, cyd charisse, esther williams, on an island with you(1948), peter lawford, ricardo montalban, the 40s