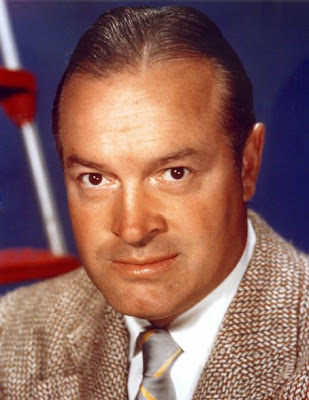 Bob Hope, made his first films in 1934 Educational Pictures for a short-subject comedy called, Going Spanish. Hope lost his contract with them when Walter Winchell asked him about the film. Hope joked, "When they catch John Dillinger, they're going to make him sit through it twice." Shortly after that he was working for New York's Vitaphone studio in 20-minute comedies and musicals from 1934 through 1936, beginning with Paree, Paree (1934).

Paramount Pictures signed Hope for the 1938 film The Big Broadcast of 1938. During a duet with Shirley Ross accompanied by Shep Fields and his orchestra, Hope introduced the song that he became best known for, "Thanks for the Memory".

Bob Hope's best known performance was in my favorite Bob Hope movie, My Favorite Brunette(1947). A movie poking fun at film noirs. With Lon Chaney, Jr. playing Willie, a character based on his Of Mice and Men role Lennie. Peter Lorre as Kismit and cameo appearances by Alan Ladd and Bing Crosby.

He also performed in the "Road" movies in which he performed with Bing Crosby and Dorothy Lamour. Hope and Lamour were lifelong friends, and she is the actress most associated with his film career. Other female co-stars included Paulette Goddard, Lucille Ball, Jane Russell, and Hedy Lamarr.
Posted by Dawn at 4:49 AM