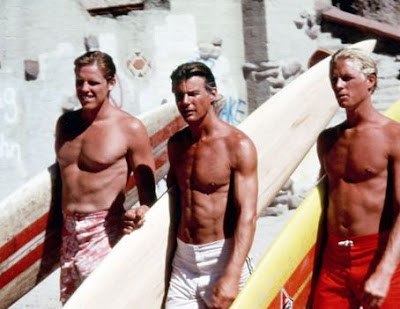 Big Wednesday (1978). Director: John Milius. Milius co-wrote Big Wednesday with Denny Aaberg, and it is loosely based on their own experiences at Malibu and a short story Aaberg had published in a 1974 Surfer Magazine entitled "No Pants Lance." Cast: Jan-Michael Vincent, William Katt and Gary Busey. Beautiful surfing cinematography, also several world champion surfers were used as stunt performers.

Their surfing lives go back to the summer of 1962 to their attempts of dodging the Vietnam War draft in 1965, and in 1968 when one of their friends is killed in Vietnam. The three make the difficult transition to adulthood.

The friends reunite years later after Barlowe has served time in Vietnam. With this reunion the transitions in their lives becomes the end of what the 1960's meant to so many of us who grew up in the 60's and early 70's.

Some of the things I remembered about this movie is the The bond between these guys. Jan Michael Vincent, Gary Busey (who makes appearance again in Point Break), and William Katt doing much of their own surfing.