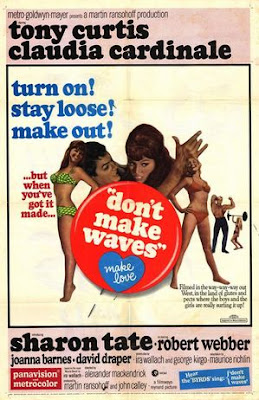 This is one of those movies not too many people may know about. I saw it the other night on TCM and liked it. It's not the usual 60's style sex beach comedy with tons of laughs or really much deep thought. Actually it's kinda weird in certain scenes but it held my interest the entire time. Tony Curtis plays New Yorker Carlo Cofield, newly arrived in Southern California, who while stopping at the local beach, has one hell of a day. He runs into quirky artist Laura (played by Claudia Cardinale) who manages to send Carlo's car running downhill off the side of the road, crashing and burning. He loses all his belongings and once Laura finds out it was her fault, does the only sensible thing...she takes him home with her. Of course Laura has a sugar daddy...a married executive named Rod Prescott (played by Robert Webber) who takes offense to Carlo being there. Well Rod kicks Carlo out, who has to sleep on the beach overnight. The next day Carlo goes swimming in the beach and gets promptly knocked out by oncoming surfers. He is pulled from the water and given CPR by a lovely girl named Malibu, who also happens to be a sky diver...it could happen (love the name and she is played by Sharon Tate). Carlo immediately is smitten with her and puts in motion a plan to seduce her. All he is to do is avoid her boyfriend Harry, a hulk of a body-builder. In the meantime, Carlo finagles his way into Rod's office and secures a job through blackmail. If Rod doesn't agree, Carlo goes straight to his wife Diane (wonderfully played by Joanna Barnes). So Carlo is now in the business of selling pools, which is very lucrative in California. And has to deal with three beguiling women. Everyone ends up at Carlo's hillside house during a severe rainstorm and eventual mudslide. A lot happens in this movie doesn't it? Like I said it's not the greatest but it does have it's moments. And the cast is very easy on the eyes. Curtis is in tip top shape as he has several scenes sans his shirt. And he gets most of the best lines in this movie. He even has a scene with Tate jumping from a airplane doing a skydive. Well Carlo passes out because he looses his parachute and it's one of the funniest reactions you will ever see. The women all are stunning especially Cardinale. Tate looks great too, but her part is very under-demanding. Joanna Barnes delivers the best performance of the three as the much put upon wife who is smarter than everyone else in the movie except maybe for Curtis. So all in all Don't Make Waves is a diverting comedy that will pass the time quite quickly at 97 minutes. Two sidenotes, the musical score is by Vic Mizzy, who did the Green Acres TV show score. And Jim Backus shows up with his wife and they play themselves in a cool little scene as Carlo tries to sell them a pool. Backus even gets to do a Mr. Magoo impression. Like I said a lot of stuff happens in this movie. 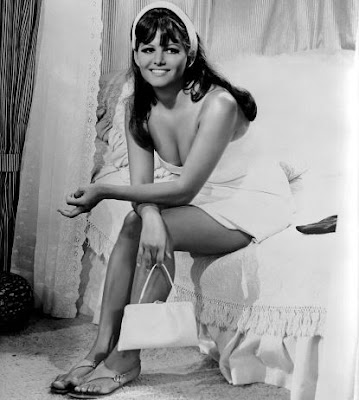