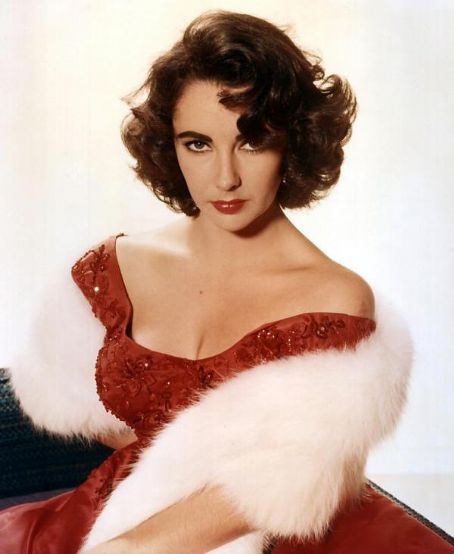 Elizabeth Taylor's, performance in Lassie Come Home(1943), landed her a seven-year contract with MGM. On her first assignment she was a loaned-out to 20th Century Fox for the film version of the Charlotte Bronte novel Jane Eyre (1944). During this time she returned to England to perform in, The White Cliffs of Dover (1944).

Her reputation as "One-Shot Liz" promised her a career with Metro. Taylor's performance in Little Women (1949) would be her last adolescent role.

In October 1948, she sailed aboard the RMS Queen Mary travelling to England where she would begin filming on Conspirator(1949), where she would play her first adult role.

Her next performances were in the films, The Big Hangover (1950), Father of the Bride (1950). Which spawned a sequel, Father's Little Dividend (1951). It would be Taylor's next picture A Place In The Sun(1951), that would set the course for her career as a dramatic actress.

While she wanted to play the leads in The Barefoot Contessa and I'll Cry Tomorrow, MGM continued to cast her in forgettable films such as: a cameo as herself in Callaway Went Thataway (1951), Love Is Better Than Ever (1952), Ivanhoe (1952), The Girl Who Had Everything (1953) and Beau Brummel (1954).

Taylor had been forced by her pregnancy to turn down the film, Elephant Walk (1954), though the role had been designed for her. Vivien Leigh, got the part and went to Ceylon to shoot on location. Leigh became ill during filming and Taylor reclaimed the role after the birth of her child. Elephant Walk (1954), is one of my favorite Elizabeth Taylor films. Based on the novel "Elephant Walk" by Robert Standish(1898-1981). 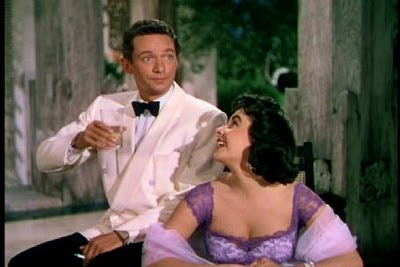 In a England, book shop clerk Ruth, is looking forward to her upcoming marriage to John Wiley, the owner of a Ceylon tea plantation. When Ruth arrives at Elephant Walk, Ruth is thrilled that John's "bungalow" is really a mansion.

One thing troubling her, is that John's father built the mansion across the path of the elephants on their way to water. Ruth is surprised to learn John's father is buried in a marble grave behind the house. Soon, John's friends and his overseer, Dick Carver, drop by the house to meet Ruth. Dick, who is leaving for Paris the next day, tells Ruth not to take Tom legacy too seriously.

Later that night, Ruth is awakened by the sound of John and his friends playing polo on bicycles across the mansion's wood floors. When Ruth tells John she was frightened by the noise, he calls her childish. Ruth runs crying back to her bedroom, John follows and apologizes.

The next day, Ruth tours the kitchen with Appuhamy. He shows Ruth the items that were the favorites of "the old master".

Because John does not seem to have much time for her, his friend Dick and Ruth soon become involved. Now, wanting to leave, Ruth asks Dick to take her to Paris. But an epidemic of cholera suddenly breaks out, and everyone on the plantation is put under quarantine. Will John come out from under his fathers spell in time to save his marriage and his tea plantation? This film is a great Elizabeth Taylor flick. She is absolutely gorgeous and makes the right decision in the end.

The Last Time I Saw Paris (1954), with Taylor being reunited with Van Johnson.

Although pregnant with her second child, Taylor went ahead with the film, Cleopatra (1963). Following with a more substantial role with Rock Hudson and James Dean in the epic, Giant (1956).

Taylor was nominated for an Academy Award for Best Actress for the following films: Raintree County (1957) opposite Montgomery Clift, Cat on a Hot Tin Roof (1958) opposite Paul Newman and Suddenly, Last Summer (1959) with Montgomery Clift, Katharine Hepburn.

Taylor won her first Academy Award, for Best Actress in a Leading Role, for her performance as Gloria Wandrous in BUtterfield 8 (1960), which co-starred then husband Eddie Fisher.

Taylor performed in the film Reflections in a Golden Eye (1967) opposite Marlon Brando and Secret Ceremony (1968). By the end of the decade her box-office drawing power had begun to diminished, proved by the failure of The Only Game in Town (1970), with Warren Beatty.

With then-husband Richard Burton, she co-starred in the 1972 films Under Milk Wood and Hammersmith Is Out, and the 1973 made-for-TV movie Divorce His, Divorce Hers.

Email ThisBlogThis!Share to TwitterShare to FacebookShare to Pinterest
Labels: elizabeth taylor, summer under the stars 2010