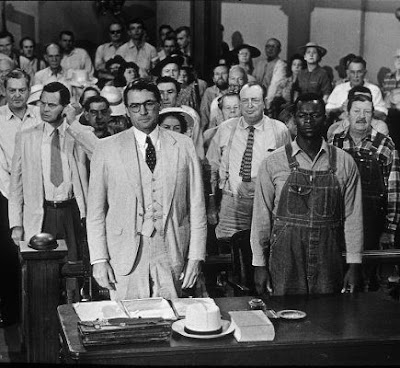 To Kill a Mockingbird(1962). Drama film adaptation of Harper Lee's novel of the same name. Cast: Mary Badham and Gregory Peck.In 1995, the film was listed in the National Film Registry. It also ranks twenty-fifth on the American Film Institute's 10th anniversary list of the greatest American movies of all time, and #1 on AFI's list of best courtroom films. In 2003, AFI named Atticus Finch the greatest movie hero of the 20th century.This film marks the film debut of Robert Duvall, William Windom and Alice Ghostley.

The story is about Atticus Finch, a widowed small town lawyer and his two children who live a carefree life. They spend their time running the neighborhood, teasing eccentric Mrs. Dubose, and hanging out with their new little friend, who has BIG stories about Boo Radley, a mentally retarded neighbor whom they have never seen.

Soon there is big trouble for the town, Atticus agrees to defend Tom Robinson, who is accused of raping Mayella Ewell. The children find themselves defending their father against the taunts of their classmates. Even though Atticus proves Tom's innocence, the jury finds him guilty. In revenge against Atticus, Bob Ewell attacks the two children, but Boo Radley, who has secretly watched over the children comes to the rescue.

"To Kill a Mockingbird" has what I thought one of the most impressive child performances I have ever viewed. The scene in which Scout breaks up the lynch mob by identifying its individual members is a very powerful moment. 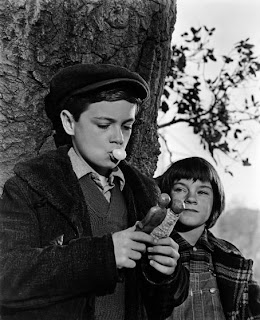 Mary Badham, best known for her portrayal of Jean Louise 'Scout' Finch in To Kill a Mockingbird (1962), for which she was nominated for an Academy Award for Best Supporting Actress. At the time, Badham (age 10) was the youngest actress ever nominated in this category.

Badham had no prior film acting experience before being cast in To Kill a Mockingbird. The Oscar in her category went to another child actress, Patty Duke for The Miracle Worker.

During filming, Badham became close to Gregory Peck and remained friends with him.

Badham is also known for her performance in, The Bewitchin' Pool, the final episode of the original Twilight Zone series.

She also performed in the films, Let's Kill Uncle and This Property Is Condemned.

She also made a cameo opposite Keith Carradine for his film, Our Very Own.

At present Badham is an art restorer and a college testing coordinator. Married to a school teacher, and the mother of two, she travels around the world sharing her experiences in the making of the film, To Kill a Mocking Bird.
Posted by Dawn at 4:48 AM

Email ThisBlogThis!Share to TwitterShare to FacebookShare to Pinterest
Labels: gregory peck, the 60s, to kill a mocking bird(1962)