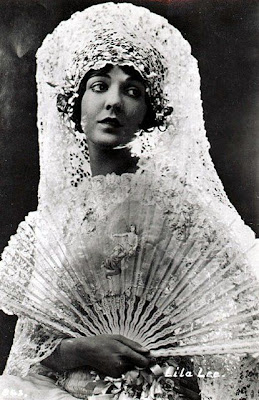 This weeks Chick Flicks at the Moves: Blood and Sand (1922). Silent film produced by Paramount Pictures, directed by Fred Niblo and starring Rudolph Valentino, Lila Lee(pictured above), and Nita Naldi. It was based on the Spanish 1909 novel Blood and Sand by Vicente Blasco Ibáñez. Click picture on side bar to view movie.

ON TCM : Monday. July 26, 2010. When Were You Born(1938). Astrology and murder meet in the Warner Bros. When Were You Born? When horoscope specialist Mary Lee Liang (Anna May Wong) predicts the death of importer Philip Corey (James Stephenson), her prophecy comes true in a surprisingly short time thanks to a mysterious killer.

ON TCM: Tuesday July 27, 2019. Doris Day. Doris Day's entertainment career began in her late teens as a big band singer. In 1945 she had her first hit recording , "Sentimental Journey", and, in 1948, appeared in her first film, Romance on the High Seas. During her entertainment career, she has appeared in thirty-nine films, recorded more than six-hundred-fifty songs, received an Academy Award nomination, won a Golden Globe and a Grammy Award, and, in 1989, received the Cecil B. DeMille Award for lifetime achievement in motion pictures. Click picture on sid bar to view the list of 5 Doris Day featured movies.

ON TCM: Tuesday. July 27, 2010. The Old Maid(1939). The Old Maid is a 1939 American drama film directed by Edmund Goulding. The screenplay by Casey Robinson is based on the 1935 Pulitzer Prize-winning play of the same title by Zoë Akins, which was adapted from the 1924 Edith Wharton novella The Old Maid: the fifties.

On TCM: Friday. July 30, 2010. Deception (1946).Deception (1946) is a film noir released by Warner Brothers, and directed by Irving Rapper. The film is based on the play Monsieur Lamberthier by Louis Verneuil. The screenplay was written by John Collier and Joseph Than.