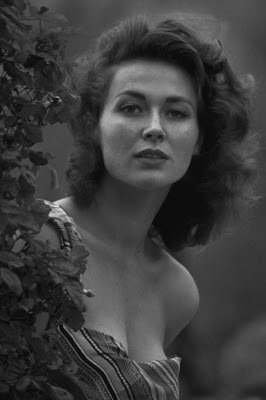 Gia Scala, studied acting at night and made appearances on radio shows and television quiz shows. At the end of 1954 she was signed contracts with both Universal Studios and Columbia Pictures. Using the stage name "Gia Scala", she made her first film, All That Heaven Allows(1955), with Jane Wyman and Rock Hudson. Her next performances were, Tip on a Dead Jockey, The Garment Jungle (1957) and The Tunnel of Love (1958), starring Richard Widmark and Doris Day. 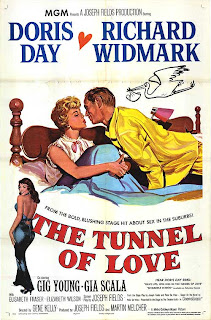 A romantic comedy based on the Broadway hit by Peter De Vries and Joseph Fields. The film follows a married couple, who are unable to conceive a child and have to go through a bunch of red tape to adopt a child. The Tunnel of Love is best known for the first directorial of Gene Kelly in which he didn't also star.

Doris Day received a Golden Globe-nomination for Best Actress for her performance. Please check out movie review on Noir and Chick Flicks: Doris Day Page,located on side bar. Critics also gave good reviews for Gia's performances in, The Garment Jungle, "Anna" and The Guns of Navarone(1961), starring Gregory Peck.